Controversial prop Matt Lodge says he will be forever indebted to Wayne Bennett for putting his "reputation on the line" and throwing him an NRL lifeline.

But Lodge is unfazed by the prospect of playing under another Brisbane coach, saying he's still keen to re-sign despite Bennett's uncertain future. 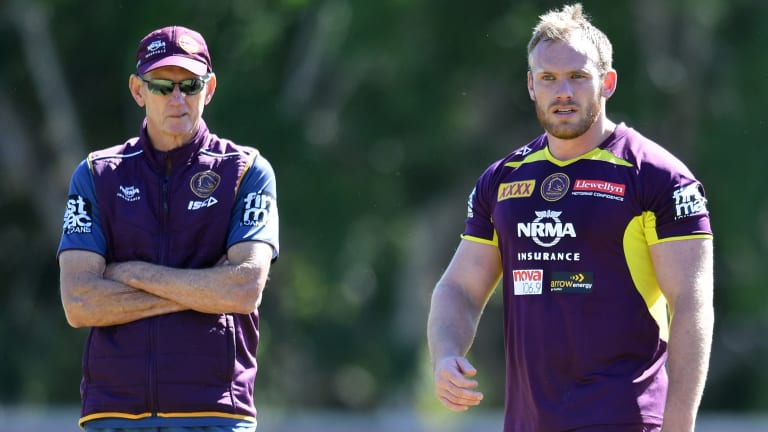 Lodge is nutting out a contract extension with the Broncos and aims to re-sign soon after Bennett gave him a second chance following his well-publicised 2015 drunken rampage in New York.

Lodge can plan his NRL future again after reaching a settlement with the victims of his US attack following a $1.2 million damages bill.

Bennett's future is not so clear after the Brisbane board knocked back his request to stay on in 2020.

Lodge baulked when asked if he would only re-sign under the proviso Bennett was Broncos coach.

"It's not my call (but) I would probably stay here if you were the coach," he told the reporter.

"It's not up to me. He has been here forever. The club is in good hands.

"I am just a little fish. I am here to play footy and at the moment I am happy playing under Wayne."

Lodge admitted he wouldn't be playing NRL without Bennett.

"Wayne put his reputation on the line to have me here. A lot of people didn't do that," Lodge said.

"I probably wouldn't be playing if it wasn't for someone who had the guts to stand up and give me another chance.

"I haven't recommitted here yet but I love playing under Wayne and he's the only one in the comp who put their hand up to take me back. I will always owe him for that."

Lodge's time with the man who resurrected the ex-Wests Tigers forward's career may be limited after Bennett had his pitch to coach in 2020 rejected.

Bennett had hoped to step aside and take up a football director role with his assistant Jason Demetriou taking over the Broncos reins in 2021.

Lodge said Bennett hadn't shown the off-field controversy was affecting him before their push for a home final.

The seventh-placed Broncos take on the Sydney Roosters on Saturday night.

Broncos forward Josh McGuire left training early on Monday due to illness but is expected to be fit for the Roosters.