Nathan Buckley believes playing at Optus Stadium just a week ago will hold his Collingwood side in good stead for one of the toughest tasks in footy – an away final in Perth.

Not least because it's helped the Magpies get to grips with the new venue's dimensions.

"It was a great experience to go across and get a feel for it," Buckley said.

"It's a different ground. The stands really hang over the top of you, it has a bit of an MCG feel in that regard.

"It's a bit sneaky skinny to be honest. We kicked out of bounds on the full a few times. ANZ Stadium has a similar quirk about it.

"That gives us a bit of a heads up into what we can get out of our offence and what you may be able to do with your defence as well."

Collingwood's return to Perth is noteworthy in itself as the Magpies haven't been to Western Australia twice in a season since 2007. 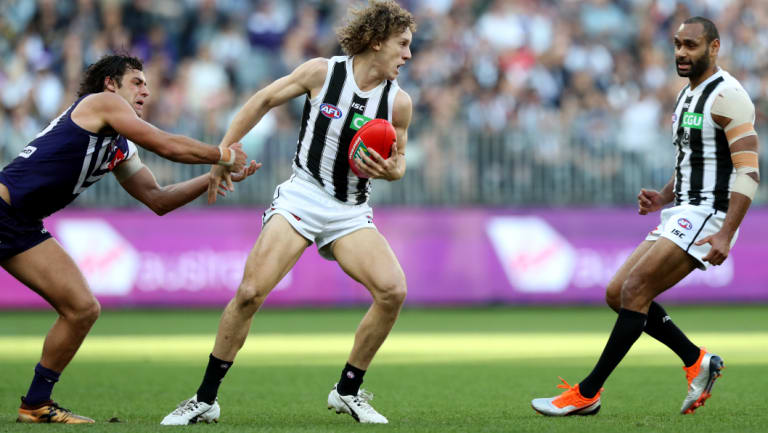 Chris Mayne (centre) in action in the Pies’ round 23 win over Fremantle.

That year, a 35-year-old Buckley helped Collingwood win a semi-final over the Eagles in extra time.

It would be the last win of his illustrious playing career.

The match is the first final to be played at the league's newest venue, where West Coast hope to continue a proud 11-3 winning record in home finals.

While the Magpies' win last week – a nine-point defeat of Fremantle after a tied game at three-quarter-time – was far from convincing, Buckley hopes it helped his players grow belief.

"Collingwood's recent record was losing six of the last seven round 23s when we've had finals series to go into.

"What we were able to do on the weekend, whilst it was expected, showed some really strong mental and emotional resilience to get the win when we didn't play particularly well."