Manchester City's Kevin De Bruyne faces a spell on the sidelines after suffering a knee injury in training, the English Premier League club has confirmed.

The Belgium midfielder will undergo tests in the coming days to determine the full extent of the problem but there have been reports the 27-year-old could be sidelined for around two months. 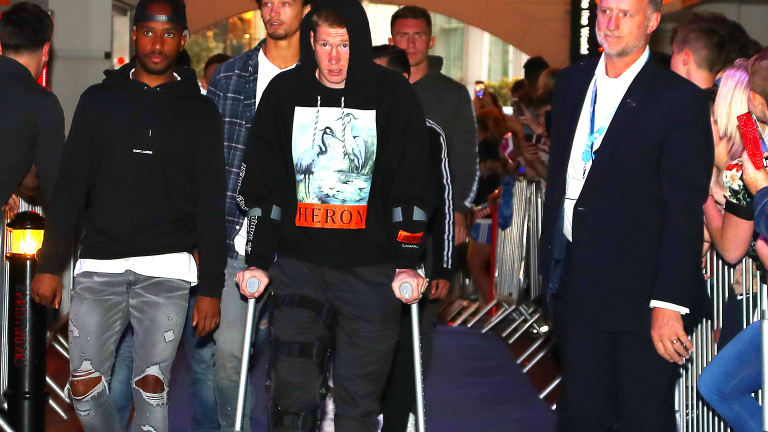 Sidelined: An injured Kevin De Bruyne arrives for the premiere of a documentary on Manchester City.

A statement on the EPL champions' website read: "Kevin De Bruyne is undergoing tests on his right knee after sustaining an injury at training on Wednesday.

"The extent of the problem is not yet known and we will bring you further updates on Kevin's condition in due course."

If out for two months, De Bruyne would miss the start of City's Champions League campaign and a potentially important Premier League clash at Liverpool on October 7.

He came off the bench on Sunday in City's 2-0 victory over Arsenal in their opening League match.

The extent of the problem is not yet known and we will bring you further updates on Kevin's condition in due course.

In 2016, De Bruyne missed 12 games after injuring his right knee during an English League Cup semi-final victory over Everton.

De Bruyne scored eight goals and had 16 assists as City lifted the title with a record-breaking 100 points last season.

City are next in action against Huddersfield at Etihad Stadium on Sunday.