Manly chief executive Lyall Gorman resorted to personally phoning club members on Thursday in a desperate bid to help the Sea Eagles avoid a crowd of less than 5000 for their final game at Brookvale.

In the same week head coach Trent Barrett made it clear he no longer wanted to be at the club, fans are expected to follow suit and snub the 6pm clash against Gold Coast Titans. 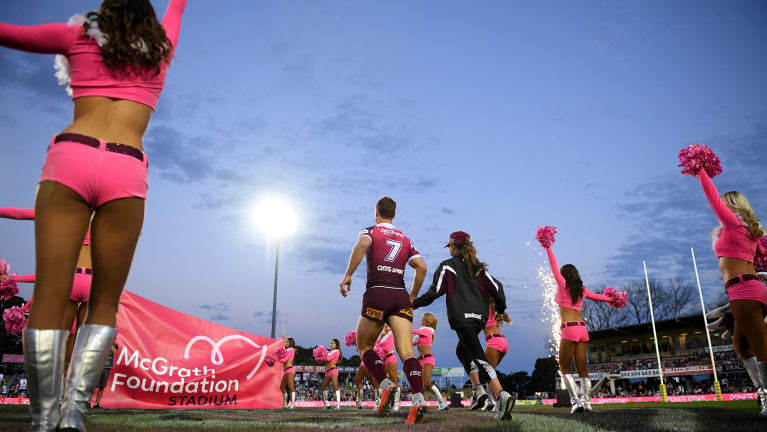 Home support: The Sea Eagles cheer squad will be at Lottoland even if there is unlikely to be too many others.

The last two games at Lottoland against Melbourne and Canterbury have been watched by 6134 and 7846 spectators respectively.

Last year's 4189 against Newcastle on a night that featured howling wind and rain remains the lowest Brookvale crowd in the NRL era. Only 2506 turned up to watch the Gold Coast in 1997 during the Super League war.

Gorman told Fairfax Media that the crowd figure on Friday night would have nothing to do with the Barrett controversy.

"If we had a coaching crisis and were playing for spot in the top four, I know what crowd would be," he said.

"The crowd will have nothing to do with our coaching staff .I've worked in three sports – cricket, soccer and rugby league – and globally crowds are driven by results.

"Unfortunately this hasn't been our best year on the park. Friday nights at 6pm are a tough sell regardless. We can only try to climb up the ladder the next three weeks.

"Our Thursday and Friday night crowds have been all been around that 5000, 6000 and 7000 mark. There is tremendous pride and parochialism around this club, and that's why fans should get there.

"It's out last home game of the year. In a way, we should have won five of our last six games, and we got pipped by Melbourne with a late penalty goal, and there was the Penrith blow-up [where Manly surrendered a giant lead]."

Gorman said Barrett would "absolutely" be in the coach's box on Friday night, and "of course" would be at the helm for the remaining two matches.

To prove how on the nose Manly are with the locals on the northern beaches, more than 15,000 fans are expected to watch Saturday's club rugby battle between the Manly Marlins and Warringah Rats.

The famous Manly Seabirds, however, are not giving up on their team, with manager Monique Carroll not tempted to give any of the 16 members of her cheer squad the night off given the tiny crowd.

"The beauty about the Seabirds and cheerleaders in general is when your team is down, everyone looks to the cheerleaders for that cheer spirit," Carroll said.

"We'll still be there, lifting the crowd, and they can look to us to make them proud."

Meanwhile, Dylan Walker was keen to continue his halves combination with Daly Cherry-Evans as he prepares to gp up against Titans five-eighth and Sea Eagles recruit Kane Elgey.

Just where Waker plays next season when Elgey arrives remains to be seen but Manly have won their past two with him in the halves and claimed victories on the road against Penrith, Brisbane and Melbourne when he played five-eighth.

Walker said he had improved his bond with Cherry-Evans but also developed a voice he was prepared to use during games.

"I have a voice now where I can speak to the boys compared to two years ago," Walker said.

"When the older players were here, I had my tail between my legs. But I now feel I've got that voice, the boys listen and respect it.

"We've shown in some games we can mix it with the good teams. That's what we're building towards."

After Barrett addressed the playing group on Monday, the players proved they were united by enjoying a lunch together at a local Italian restaurant in Dee Why.