Shortly before Jim Stynes died in the pre-season of 2012 he asked several significant people in his life to look after his football club. One of those was the AFL chief Andrew Demetriou, who visited the Melbourne chairman in his last weeks.

Demetriou could not have known then what a spectacular, short-lived failure Mark Neeld would prove as the Demons’ recently appointed coach. Nor that several months later a Fox Footy interview with Brock McLean would force his hand to investigate Melbourne’s 2009 tanking policy and uncover systematic planning the AFL could not ignore. 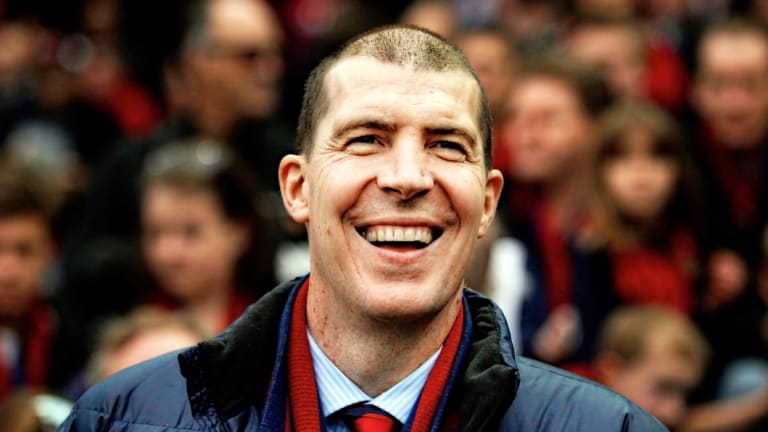 Jim Stynes asked for his club to be looked after.

Colleagues of the former league chief believe Demetriou had softened his attitude in regards to struggling teams. The traditional and lamentable contempt held by the AFL towards targeted clubs remains alive and well but there was more genuine sympathy and understanding as to the size of the challenges facing club administrations.

This belief was probably enhanced the hard way when the AFL established two new clubs on the Gold Coast and Sydney but the firm view of head office was that the Demons' hierarchy was not equipped with the right people to handle their growing list of challenges.

Melbourne were a club in crisis and in debt. Their on-field performances were lamentable, punctuated by a growing number of empty seats at the MCG.

Demetriou and his lieutenant Tony Peek had visited the Demons' football operation in the year that followed Stynes’ death and had left shocked by the contemptuous attitude of some coaches and recruiters. Senior AFL staffers back then recall Demetriou describing the defeated demeanour of some players and his sense that others were pleading for intervention.

So all of the forces above must have been playing on Demetriou’s mind in early April 2013 when he arrived in Sydney for a series of meetings but made an impromptu appointment with the Sydney-based Melbourne director Guy Jalland after the club’s appalling start to the season.

It was that meeting which put in place the first pieces of the rebuilding of the Melbourne Football Club. There were some blunt home truths exchanged, yet another pointed series of comments from both sides regarding the tanking findings and investigation, but ultimately the acceptance that the club required emergency surgery — a cleanout from the board down.

Jalland, the Packer PBL executive, had personally butted heads with Demetriou over the tanking affair and its clumsy resolution but the two men had a strong mutual respect. Shortly before Demetriou arrived at the Park Street offices of PBL, Jalland called him again and said Melbourne chairman Don McLardy was in town for an insurance conference and would be joining them.

Things moved quickly from that point. Sensing the mood of the forthcoming meeting Demetriou called Peter Jackson and asked him to consider joining Melbourne as an AFL-appointed chief executive. After some protest Jackson, who had been working for the AFL on various consulting jobs since quitting Essendon in 2009, left that door open.

If Jalland and McLardy had genuinely wanted Demetriou’s brutal advice, they quickly received it. Clubs existed to win, he told them, and for too long this Demons administration had tolerated mediocrity. Their supporters deserved better than the constant bland assurances that Melbourne were on the right track.

Likening the atmosphere at the club to a morgue, he asked McLardy how he would respond if his business was operating the way Melbourne was. The obvious answer was to sack the chief executive. 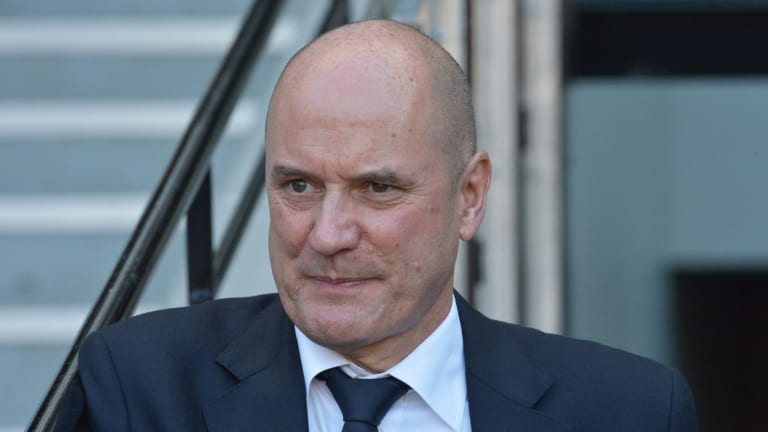 It was then that Demetriou mentioned he had called Jackson on the way to the meeting and that he believed the former Essendon CEO would take the job. Then he turned his attention to the two directors, telling them their next move must be to sack themselves.

CEO Cameron Schwab was gone within days and by mid-June new CEO Jackson had sacked Neeld. Although McLardy and the majority of the board had agreed to go as part of the condition of the AFL’s $3 million rescue package, finding the new chairman proved more difficult.

Jeff Kennett had put his hand up but the AFL ridiculed that bid given Kennett’s long history and recent presidency at Hawthorn. Former Melbourne director and Victorian treasurer Alan Stockdale also strongly put forward his services.

The league’s first choice was Sir Rod Eddington, the former British Airways chief and a director of News Corporation who is a Melbourne supporter. But Eddington told Demetriou he did not have time to take on the job.

Then the AFL successfully targeted Glen Bartlett, a former West Coast player and star WAFL full-forward who had moved to Melbourne five years early to take over as managing partner of Clayton Utz and joined the Demons as a member and one of Stynes’ Foundation Heroes.

Demetriou had worked with Bartlett, an industrial lawyer who had headed the WA Players’ Association, when he was the AFLPA boss. He told the commission that Bartlett would prove the low-profile, steady hand the club required. Bartlett’s lack of a deep history with Melbourne’s political thicket was seen as a good thing.

Although Paul Roos had been the AFL’s preferred choice, it was Jackson who landed him after returning to head office on more than one occasion to gain approval for the Sydney premiership coach’s record pay request and for selling Roos the option of a coaching succession plan.

Ultimately his succession plan brought the man whom the AFL firmly believes will be their next premiership coach, Simon Goodwin.

The former Adelaide captain, triple club champion and finals record-holder had been Melbourne’s first choice as Roos’ senior assistant-in-waiting but the Demons administration was spooked by his Essendon connection because he had been an assistant coach during the drugs scandal. So the club first approached Stuart Dew. The latter now says he knocked back the job largely because he felt he hadn’t earned it. 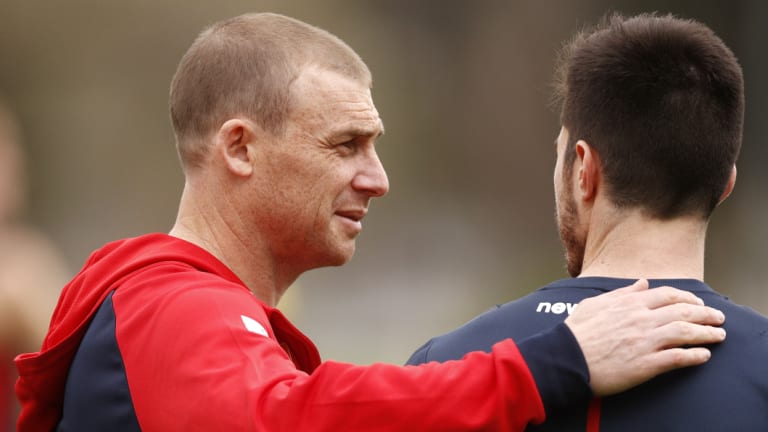 The AFL believes Simon Goodwin will be Melbourne’s next premiership coach.

When Melbourne went back to Goodwin the official interview was conducted by Jackson and Roos. At the end of the meeting both knew they had found their coach and by mid-2014 the succession plan was formalised.

Goodwin has privately known tough times and disappointment and has hit some football hurdles since taking over the reins. But he has delivered upon his promise to stamp his own values on the club and establish his version of a sustainable and successful culture. And embraced his long-suffering supporters. In a public sense that was never more obvious than when the club has opened up its doors and unlocked the stories of its players in the lead-up to each final.

Interestingly at the end of the 2014 season, on the day that Brendan McCartney was sacked by the Western Bulldogs, both Goodwin and Jackson called him not only to offer their support but also to ask him to consider joining the incoming Goodwin at Melbourne down the track.

Not everything that has unfolded at the Demons since the new administration took over has proved so harmonious. Notably the occasional tension between Bartlett and Jackson that escalated after Jackson resigned and the club began searching for his replacement.

Jackson was shut out of the process and Bartlett and his board lieutenant Geoff Freeman chose Gary Pert, removed last year as Collingwood’s 11-year chief executive after that club’s intensive review. That surprise appointment and the perceived lack of wide consultation which led to Pert’s recruitment was noted and Bartlett was not happy with some of the responses, including an article by this columnist.

But ultimately both chairman and chief executive have delivered and worked successfully together despite the occasional frustration. Ego clashes, credit-claiming and football clubs come hand in hand after all.

The sensitive handling of both men, not to mention the balancing act with Jackson handing over the reins to Pert almost as soon as the Demons’ season has finished, is a credit to the other senior people at Melbourne who have been empowered by Jackson’s stewardship.

Bartlett has stayed true to his word as a steady and relatively low-profile president overseeing a board that no longer leaks and in turn allowed Jackson a relatively free hand in rebuilding Melbourne as a financially stable football club equipped with their own blockbuster fixtures, growing membership and attendances. For two weeks running, more than 90,000 attended their finals at their beloved home ground.

Jackson’s executive team, many who have survived from the Stynes/McLardy-Schwab era, largely revere him. Football boss Josh Mahoney, approached for the Carlton football position earlier in the season, along with Todd Viney, have provided Goodwin with the stability and levity not always afforded relatively young rookie coaches and have overseen a list-management and recruiting team which Jackson in turn would say deserve significant credit for the club’s first top-four finish since 2000.

The AFL should rue the short-sighted choices they made in establishing Gold Coast. Then, Demetriou and his team put relatively inexperienced operators in every senior position and placed an understaffed football club in a group of temporary sheds at the previously cursed Carrara. The competition is still paying for that.

But when you consider Port Adelaide, and where it had descended by 2011-12, and more recently the Brisbane Lions — albeit yet to climb from the bottom four — and link those two examples with Melbourne, the truth is that the best head office can offer crisis-ridden clubs is not primarily extra funding nor priority picks. They might be tough to find sometimes, but the simple solution is the right people at the top.