Home » Sport » Millman charges into US Open third round

Australian John Millman has scored one of the biggest wins of his career to charge into the US Open third round in New York. 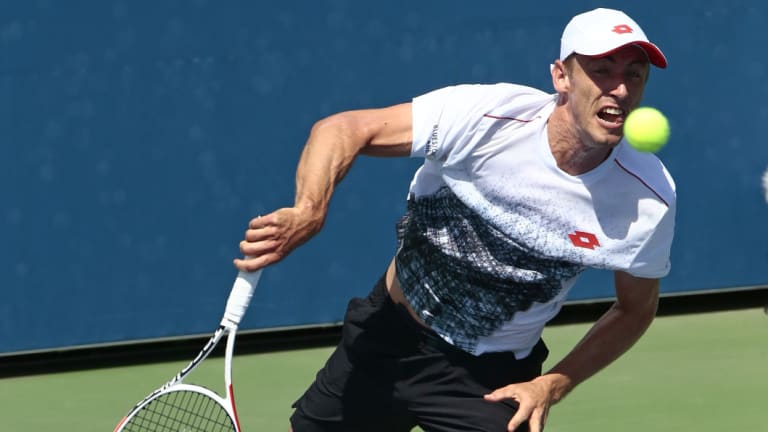 Progress: Australia’s John Millman serves to Fabio Fognini, during their second round clash.

A winner over Nick Kyrgios last year, Millman was thrilled to embark on another great run in the Big Apple.

"Obviously with Fabio, he has had a great year and he has won a couple of titles this year and we all know he can create something out of nothing," the Queenslander said.

"He can kind of be a bit of a roller-coaster in terms of how he plays, sometimes with his emotions too. I don't think that is any secret.

"For myself, it was important to keep a very good level and consistently go through that. I did that for the majority of the match."

Victory over the world No.84 would catapult Millman into a last-16 showdown with either Kyrgios or 20-time grand slam champion Roger Federer.

The 29-year-old knows opportunity knocks, but is keeping a level head.

"Mikhail is a very good player. When he is on, he can play some great, great tennis," Millman said.

"He is an extremely good ball striker. He plays a tough game and he hits that backhand, it has almost got underspin on it.

"It is low over the net and shoots through on the courts. It is going to be really different conditions, though.

"It is going to be a bit about how I handle the conditions also, but I am really happy to be in another third round here and it would be great to win one more."

Meanwhile, Matt Ebden’s US Open campaign has come to an end at the hands of veteran German Philipp Kohlschreiber.

Despite his second-round exit, 30-year-old Ebden will return to the world’s top 50 as he enjoys a late-career resurgence.