After a rough 2017, Tegan Molloy is turning back the clock to her childhood when it was all about having fun flying down the slopes of Thredbo.

It's working. And the Jindabyne mountain biker has her sights set on a top-10 finish in the downhill at the world championships in Switzerland next month.

Molloy was part of Australia's 15-rider squad named on Saturday for the elite events in not only downhill but cross country as well. 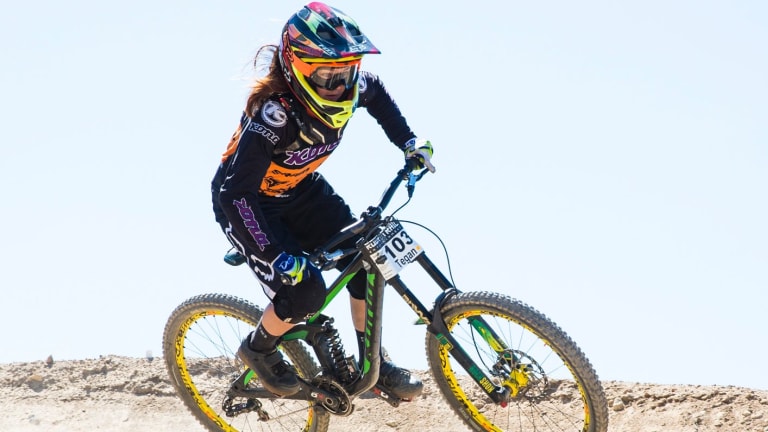 Jindabyne’s Tegan Molloy has her sites on a top-10 finish.

Fellow Australian Tracey Hannah is ranked No.2 in the world and one of the favourites for the crown in Lenzerheide from September 5-9.

Molloy finished 12th last year at the world championships in Cairns and was hoping to improve on that to join Hannah in the top 10.

She'll spend the next four weeks training in at home before heading to France for a week.

Canberra downhill rider Jackson Frew, who's currently competing in the US, and cross country rider Daniel McConnell were also named.

Rebecca McConnell declined the offer to be part of the squad after taking some time off to consider her future.

Molloy was excited about Switzerland, having started working with a sports psychologist to help put the fun back into the sport.

"I was excited to qualify for the team this year. I had a bit of a rough season last year so just to qualify this year was a main goal of mine," she said.

"I struggled a bit mentally with my riding and just self-confidence, but now I feel like I'm on top of that and riding as good as ever.

"I started seeing a sports psychologist and I'm trying to have a bit more fun with my riding and not take it all so seriously."

The 22-year-old was a junior world champion in 2014, but missed a few championships due to a couple of broken collarbones.

As part of her new outlook, Molloy was simply hoping for a good run down the mountain – although breaking the top 10 wouldn't hurt.

"I'm just hoping for a solid race, to improve on my seeding and qualifying times, just have a smooth solid run that I'm happy with. A top 10 result would be pretty ideal," Molloy said.

"I'll just stay at home for a couple more weeks, just training in the gym and trying to get out on my downhill bike as much as I can.

"Then hopefully head off to France for a week before the world champs just to get some solid training and riding overseas before the big race."