The monkey is still on Melbourne’s back. In fact the monkey’s grip looks as firm as ever. The Demons remain without a top eight scalp, and their finals spot is again imperiled.

The latest hurdle they were unable to clear came in the form of ever-defiant Sydney, who overcame the loss of two players in the first half, including the crushing blow of a looming sixth knee reconstruction for Alex Johnson, to shore up their own spot in the September action by winning at the MCG. 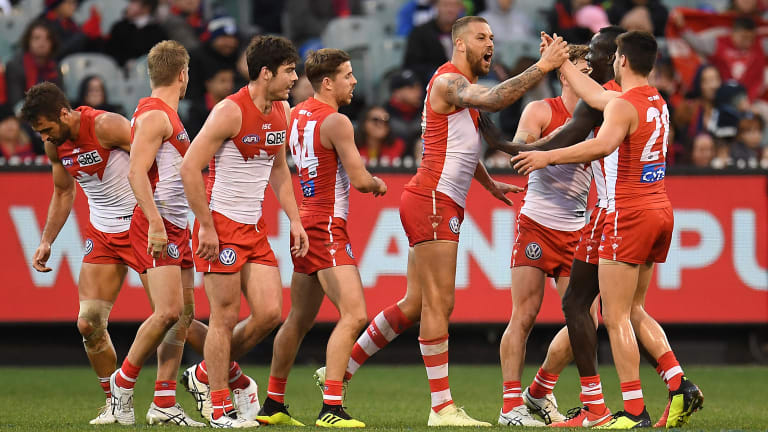 Bud time: Lance Franklin celebrates with the Swans after booting a goal against Melbourne.

And the tasks don’t get any easier for Melbourne. To make the finals they will almost certainly need to beat one of West Coast or Greater Western Sydney, both of whom sit inside the top four. The Demons began the round in the top four, yet another near finals miss is a very real possibility.

Sydney, who along with Johnson also lost Nick Smith to a second-quarter hamstring injury, won the game by changing tack in the second quarter. Having engaged in a low-scoring arm-wrestle to quarter time, the Swans had Melbourne’s poor kicking on goal to thank that they weren’t more than three goals down early in the second term. 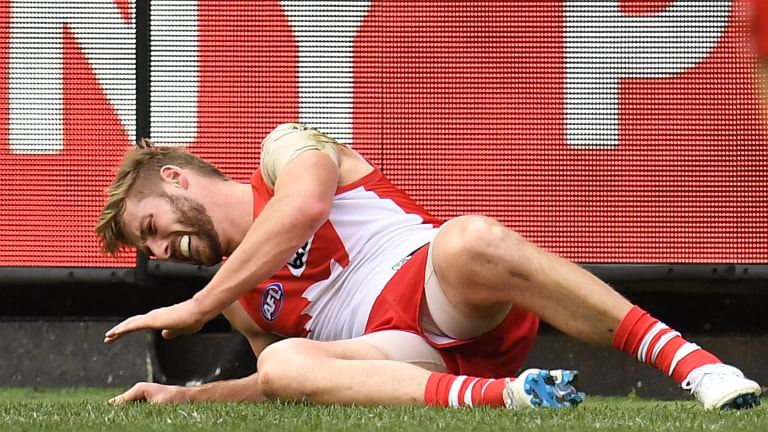 Luckless: Alex Johnson suffered another serious knee injury on his return for the Swans.

The Swans had played a largely hesitant game to that point, but for the best part of the next two quarters, Sydney took a leaf out of the same book Collingwood and St Kilda had used to beat the Demons at the ‘G earlier in the year.

The Swans used the ground’s wide expanses, smashing Melbourne in uncontested marks, and making the Dees pay with largely deadly kicking for goal.

The Demons, in contrast, kicked a lamentable 3.12 to half-time, and kept blowing chances until late in the game. A burst from Tom Papley and Lance Franklin – the only inaccurate Swan on the day – in time on of the third term took Sydney out to a game-high 28-point lead at the final change.

Melbourne, with extra rotations, came hard late, but with Isaac Heeney outstanding in defence – including taking a mark of the year contender over Jesse Hogan – the Swans prevailed by nine points.

Jake Lloyd's run was also crucial for the Swans, while Josh Kennedy dug in at the coalface, and George Hewett found plenty of the ball, even if he allowed direct opponent Clayton Oliver to finish with 26 disposals as well. Tom McCartin also deserves mention, with the AFL's youngest player kicking an opportunist goal not dissimilar to his match-winner against Collingwood last week, while also taking a big defensive mark in the final term. 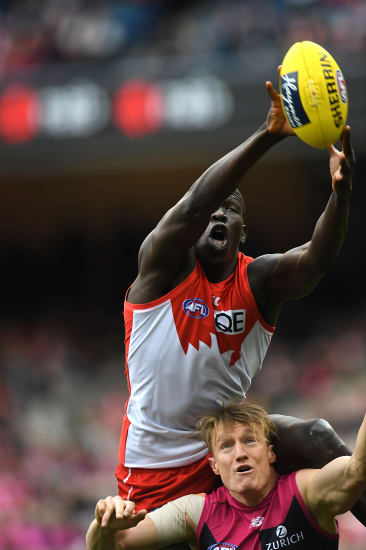 Early in the second term the dam wall looked like it was about to burst. Melbourne had sprayed a few early, but had started to find their range. Sydney had been faltering for weeks. So when Johnson’s knee buckled during time on of the first quarter, it would have been forgivable had the Swans’ spirit given way too.

Dom Tyson missed a chance five minutes into the second term, but Melbourne’s lead was 18 points, and they were all over Sydney. Where the Swans next goal was coming from was hard to tell.

Then, as if realising they had to change tack, Sydney found some much-needed dare. Harry Cunningham goaled, then Will Hayward benefited from a charmed bounce after kicking around his body from 45 metres. Aliir Aliir was a sponge, and buoyed by the confidence of having such an in-form tall defender, the Swans ran hard from half-back. Nic Newman had nine disposals for the quarter, with Sydney kicking six goals in 16 minutes.

Tellingly none of them came via Franklin, with the Swans refusing to be sucked into their superstar’s vortex when better options were available.

Dan Hannebery, down and banged-up for much of the season, and with his future in the club looking in doubt, put through one of the six. The possessed look in his eyes as he celebrated showed the renewed fire of the Bloods. The Dees missed more chances at the back end of the quarter. Despite having eight more inside 50s, they trailed by by 14 points at half-time.