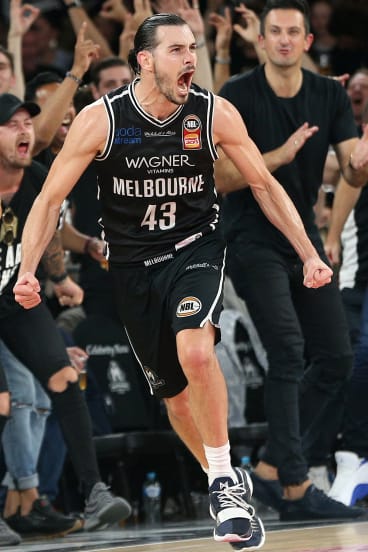 Chris Goulding’s Melbourne United have been a big part of a rejuvenated NBL competition.

Channel Nine will screen two live NBL games each week as part of a three-year partnership with the league.

Nine will show live games on Saturday and Sunday at 3pm on their 9Go! channel with talks continuing for Fox Sports to show all NBL games live.

The NBL and Nine have also struck a revenue sharing arrangement as part of the deal which could prove lucrative if more advertisers and viewers tune into the free-to-air time slots.

It's understood Nine will promote the league across its channels, something which could prove a big boost, while the NBL will continue to handle game production.

Nine will also simulcast its live games on the 9Now online service and has secured the digital catch-up rights to show replays of all NBL games throughout the season regardless of what network they are broadcast on.

The league has yet to finalise what it will do with its NBL TV app, which showed all games live and on replay, for a monthly subscription fee, last season.

Nine’s first broadcast game could be Bogut’s debut in Sydney against Adelaide 36ers on October 13, although the schedule has yet to be revealed.

Nine will also have first rights to negotiate for future basketball events including the Boomers v Team USA games in Melbourne next August which will feature an NBA-filled Australian team against a full-strength USA ahead of the 2019 FIBA World Cup in China.

NBL owner and executive director Larry Kestelman praised the deal and the exposure it will bring the league.

“To have a major free-to-air commercial partner in Nine will help take the NBL to a new level and confirm our status as the best league in the world outside of the NBA,” Kestelman said.

“We are delighted that more fans than ever before will be able to watch live basketball on Nine’s free-to-air channels and enjoy what is a golden period for the game in Australia including two huge games between the Boomers and Team USA next year.

“To be part of one of Australia’s leading media companies will take basketball to a bigger audience than ever before and we can’t wait for the season to start on October 11.”

Nine director of sport Tom Malone said the deal would see the network partner with the league to boost advertising and returns from games.

“We are thrilled to have basketball back on Nine and part of the Wide World of Sports family,” Malone said.

“Larry and the team at NBL have done a terrific job rebuilding basketball in Australia and securing some big name for the coming season – it will be great to see Andrew Bogut make his debut for the Sydney Kings.

“Moreover, this signals yet another innovation in sports rights, where the value of Nine’s spectrum has been recognised in lieu of a rights fee and production costs, while Nine has secured exclusive rights to commercialise the broadcast and sponsorship opportunities within and around the game day production, for distribution on Nine, Fox Sports and NBL.”

Nine is also looking to run a weekly half-hour basketball show on Sunday mornings and may look at broadcasting 3×3 events with the game to feature at the 2020 Tokyo Olympics.

The NBL season tips off on October 11 and Melbourne United's first home game is against New Zealand Breakers at Hisense Arena on Sunday October 14.