There might be only one more chance for punters to see Winx in Sydney, with next month’s Colgate Optic White George Main Stakes slated for her next run after another commanding return to the track on Saturday.

The superstar mare is likely to follow the same path as she did last year to the Cox Plate through the Turnbull Stakes at Flemington on October 6, so Randwick on September 15 should be inked into sporting fans’ diaries. 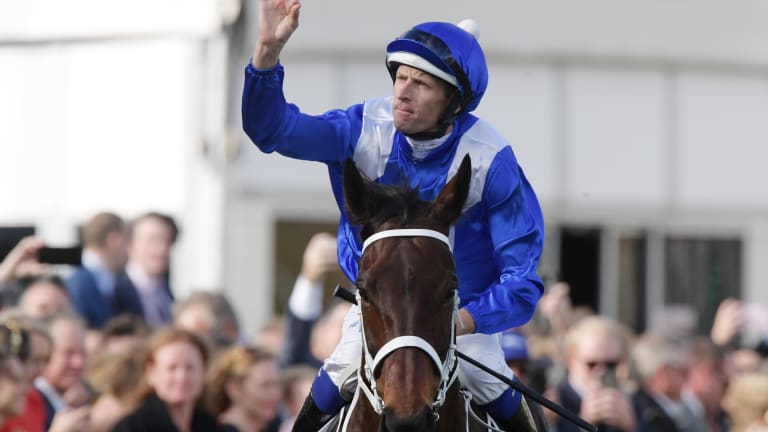 The crowd of 11,793 on Saturday for win 26, should nearly be doubled for her next appearance, when she will be racing over a mile, a distance that allows her greatness to shine through.

Winx was again in a different class in the eponymous Winx Stakes on Saturday. It will be interesting to see what the effects of being Winxed has on her rivals.

She made her run with Kementari topping the rise but when she balanced up, she left the star four-year-old in her wake. He still returned the third-best final 600m and final 400m for the race and the afternoon. The question now is whether Winx broke his heart?

What path the Godolphin team now chooses for Kementari will be interesting. He is still favoured to run in the ATC slot in The Everest.

Time expert Vince Accardi rated Winx’s return as good as she had ever gone first-up, a view that vindicated what Chris Waller and Hugh Bowman believed before the race.

“She is a freak,” Waller said. “She shouldn't be getting better.”

The premier trainer would have been delighted with the returns of his other runners. Libran, an out-and-out stayer, ran the second fastest final 600m, 400m, and 200m sections and when he gets to his trip, he will be very hard to beat.

Unforgotten and D’argento, which was a game third after being three-wide without cover, will only improve from the run and it would not be a surprise to see them winning group 1s this preparation.

Every detail important for Winx

The meticulous detail that goes into Winx's preparation was on show before her 26th successive victory when Hugh Bowman changed her surcingle on the way to the gates.

Many may have wondered why Bowman got off the mare before going into the stalls. He had gone back into the jockeys' room to get another surcingle, which holds the saddle in place, after trainer Chris Waller noticed a problem saddling Winx.

“I changed the surcingle on her,” Bowman said on Thoroughbred Weekly on Sky channel. “I use the same gear on her all the time, but the surcingle I had on was a lighter one and I hadn’t used it for about a year.

“It had a bit of tear in it and Chris noticed it when he saddling up. I’m actually a bit ashamed of that. He said just checked that. I just didn't want anything to go wrong.”

Geoff Grimish was a proud man as Invictus Prince ran into second behind Winx at Randwick on Saturday and the majority of the prizemoney will go to the Invictus Games.

Grimish is a Vietnam veteran who wants to give back to a cause close to his heart and has a number of horses named in honour of the event for injured returned soilders.

“I just want to help out some soldiers, who need help,” Grimish said. “We have Invictus Warrior and Invictus Salute as well and the aim is to have them up and racing in October when the Games are on. It was good to see that bloke run that well and maybe he can win a big race for the cause.”

There are horses every week putting themselves in the frame for the final three places in The Everest, and Showtime’s win in Saturday’s Lawrence Stakes was the most significant. 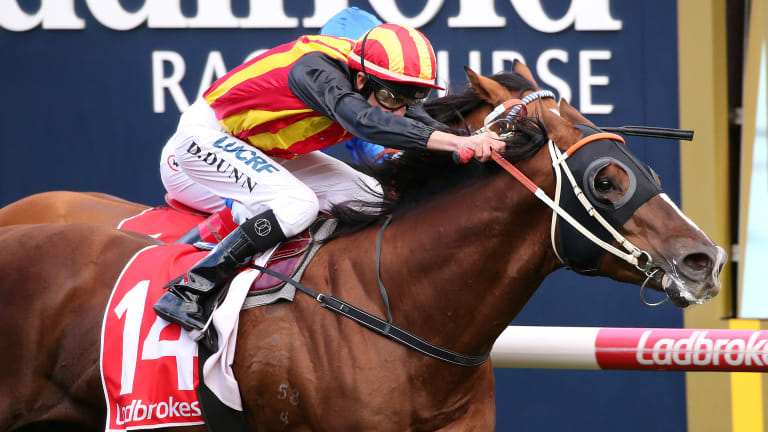 Big show: Showtime wins Saturday’s Lawrence Stakes, which puts him in the frame for he Everest,.

GPI Racing, which holds a slot in the $13 million, part owns the four-year-old and would like to have a horse of his own run if Chautauqua doesn’t get over his barrier troubles.

It was a group 2 win that Showtime had promised and co-trainer Wayne Hawkes indicated after the win that he would return to Caulfield to attempt to get a group 1 victory in the Memsie Stakes in a fortnight.

That would give him a future at stud and The Everest would almost certainly be his next start.

Le Romain continues to show he wouldn’t be out of place in the richest dance in Australian racing. He was sharp winning the Show County Quality and could challenge Pierata and Nature Strip for a place in The Everest.

The interview process to find Terry Bailey‘s replacement as Racing Victoria chief steward has thrown up some interesting candidates in the past week.

It is understood that a former steward had been offered the position and turned it down, while another former NSW bush steward, who has become a jockey manager in recent times, was surprisingly interviewed for the top job.

Stewards from metropolitan panels around the country have been interviewed as Racing Victoria attempts to fill the position before the spring carnival gets into full swing.