If it wasn’t for idealism, Kuwait coach Romeo Jozak would not be opposing the Socceroos on Tuesday morning, but overseeing them.

Four years ago, the Croatian coach was one of the two final candidates in the running for the vacant technical director position at Football Federation Australia and considered by many to be the favourite after impressive spells leading the youth development program with his native association and as academy director with local powerhouse, Dinamo Zagreb. 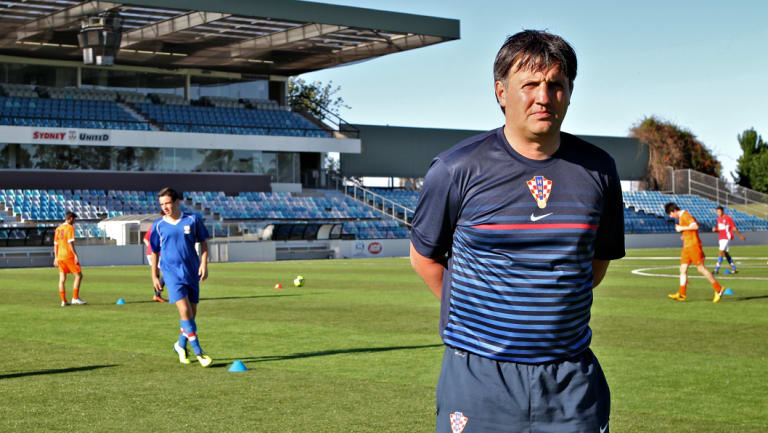 Sliding doors: Romeo Jozak conducting a clinic in Sydney back in 2013.Credit:Fairfax Media

The organisation was impressed by Jozak, followed its interest with an interview and sources involved in those talks suggest they were “close. Really, really close”.

But an ideological disagreement over a youth training method meant that interest wasn’t followed-up with a contract offer. Instead, the FFA went with Belgian Eric Abrams who departed last June.

His preference for isolated training rather than holistic match-based sessions meant he wasn’t deemed the right fit for the FFA back in 2014, despite his impressive CV. As of today, Jozak holds no grudges towards the association or Australian football.

The 46-year-old is just three months into his tenure as head coach of Kuwait and is already making an impact, with a draw against Iraq and a win against Lebanon. His third game is not only his biggest test but one he admits carries a significant emotional tag with it.

“I’ve been there many times, I have a lot of friends there, the Croatian community is still big in Australia. (Just look at) the influence and the players who have been joining the Australian national team from a Croatian background,” he said.

Not only did Jozak regularly travel to Australia to conduct seminars and training programs for clubs such as Sydney United, but he also played a major role in forging one of the Socceroos’ key forwards.

“Tomi Juric was my player when I was in Dinamo Zagreb academy. I know him from the age he was there. Yes I have a lot of friends and a lot of people I know,” Jozak said.

He has only positive and respectful comments to make about Australian football, but has made no secret of his desire to make a statement at the expense of the Socceroos.

“Yes there is an emotional connection but as the [Australia] coach [Graham Arnold] said, with the first whistle tomorrow you will forget about it being a friendly match," he said.

"Obviously I hope at the end of the match to get together again and shake hands and congratulate. I do have an emotional connection with a lot of Australian people.”