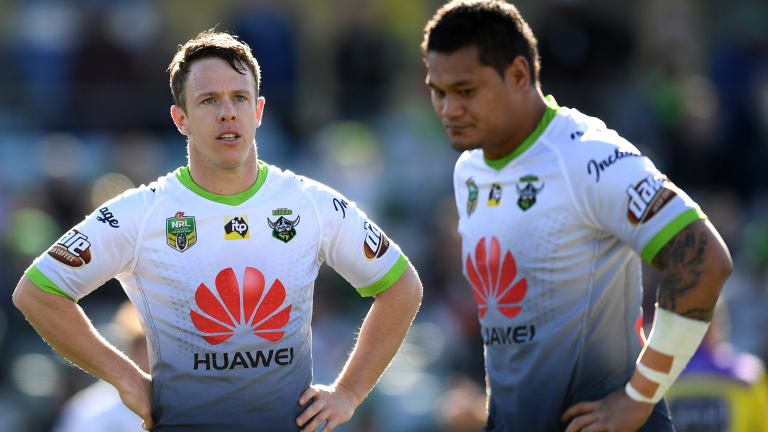 Sam Williams and Joey Leilua show their disappointment in Sunday’s loss to the Tigers.

A terrible start has ended the Canberra Raiders' season, giving Wests Tigers a 16-point start before going down 22-20 at Canberra Stadium on Sunday.

The Raiders went into the game off the back of four straight wins over the joint venture, but they stumbled out of the blocks in front of 14,583 fans and now can no longer make the top eight.

Wests on the other hand have kept their NRL finals hopes alive, drawing within two points of the eighth-placed Brisbane Broncos with three rounds remaining.

It also kept Benji Marshall and Robbie Farah's unbeaten run against the Raiders going when they've played together.

Things started to go wrong for the Raiders before the game even began with half Aidan Sezer (hamstring) ruled out, forcing Elliott Whitehead into the centres.

It took just 10 minutes to get even worse, with centre Joey Leilua sent to the sin bin for a professional foul.

Wests winger Malakai Watene-Zelezniak took one minute to capitalise when he found himself on the end of an overlap to score in the corner.

Moses Mbye went straight through the middle of the Raiders for another, before Michael Chee-Kam made it 16-0 before Leilua returned to the field to even the numbers again.

It was a lead they would never recover from despite dragging themselves back into the game in the second half. 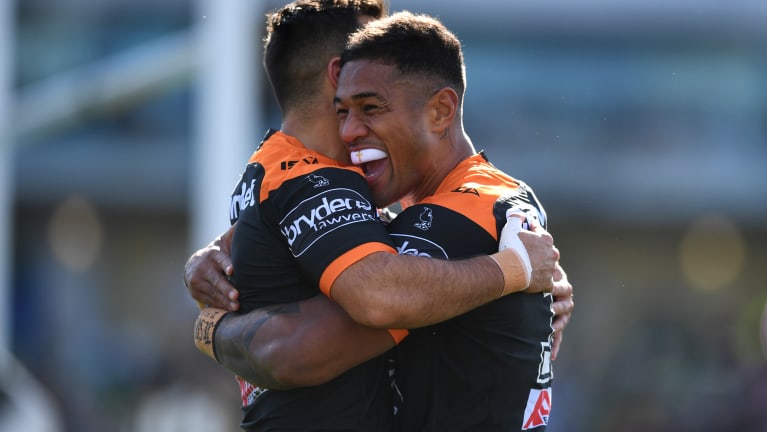 Michael Chee Kam of the Wests Tigers celebrates after scoring a try.

Wests were lucky not to lose a player to the bin themselves.

They gave away four consecutive penalties – two on their own line – before Joe Tapine took advantage of the mounting possession to barge over and get the home team on the board.

That momentum was short lived and the Tigers were in again before half-time with David Noafaluma scoring on the end of another overlap.

A Josh Papalii try just before half-time made it 20-10 at the break. 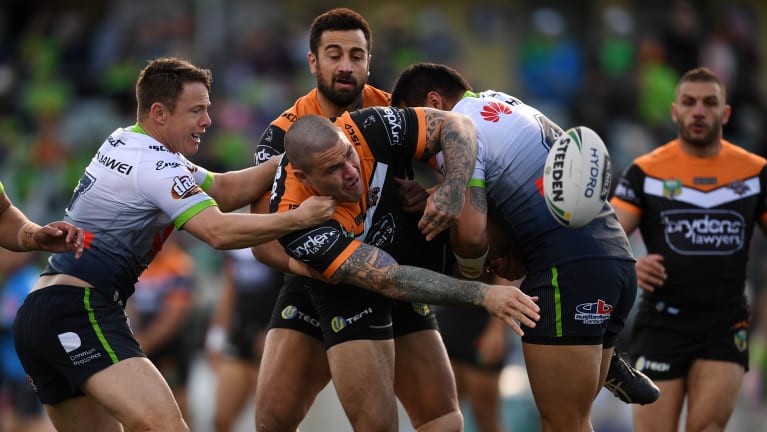 Tigers prop Russell Packer gets an offload away.

Wests flew out of the sheds and looked certain to extend their lead, with Tigers hooker Robbie Farah looking dangerous darting out of dummy half.

But the visitors could only manage a penalty goal before the game became an arm wrestle.

As the grind continued it was the Raiders who started to get on top, off the back of Jordan Rapana and Papalii's tireless work.

They then started to produce some second-phase play and it was off the back of that Leilua was able to continue his try-scoring form off the back of last week's hat-trick.

He barged over and suddenly the Green Machine looked alive.

Tapine looked dangerous every time he ran the ball and he burst through Wests left edge for a converted try that suddenly had the Raiders just two points behind with 15 minutes left.

But when winger Brad Abbey threw a pass into touch as the Raiders pressed in the dying minutes it killed their momentum.

They now host the ladder-leading Sydney Roosters on Saturday with nothing but pride to play for.