Giants centre Jamie-Lee Price insists she is focused only on the Super Netball finals, despite the looming possibility of her first Diamonds bib.

After being named in the 2018-19 Australian squad, the 22-year-old is waiting to find out whether she will actually pull on the green and gold in either the upcoming Constellation Cup or Quad Series. But Price, the daughter of former Australian league international Steve Price, is adamant she is not looking beyond the next two games. 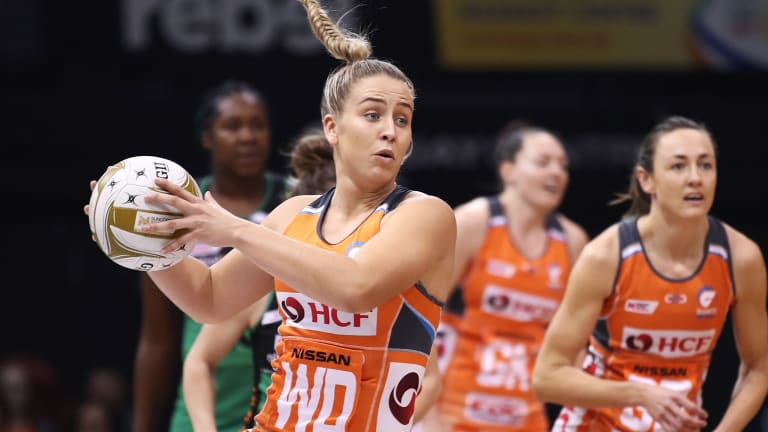 “It does play on my mind, but I think it all starts with the Giants,” Price said. “If I’m not playing well here then obviously I’m not going to get an opportunity to play for the Diamonds.

“Making sure that I am playing well with these girls and building strong connections with them – as long as I’m doing that, it should all happen.”

The mid-courter’s words echo the approach of her coach, Julie Fitzgerald.

“I’m a really big believer that if you do your job for your club, then those rewards come,” Fitzgerald said. "But if you go into a game thinking of higher rewards, it’s going to cost you.

“I would like to think that our players do not have Diamonds in the back of their minds at all when they are playing in orange.

“If you can’t do your job in orange then you’re never going to get to wear yellow.”

Combining two things that most players never see in their entire career is potentially just weeks away for the rising talent.

“We know we can [win],” Price said. “When we’re all firing and we’re all playing to the best of our ability, we’re unstoppable.

“I think we just like to make things a little bit difficult and hard for ourselves, but we got ourselves to where we needed to be to earn the second chance we’ve got this week [after finishing first on the ladder].”

After losing by 13 goals to Lightning in the grand final last year and for all of the talk of confidence, Price is aware of the level of class the Giants are up against at Qudos Bank Arena on Sunday.

“They have a lot of experience and a lot of talent in each third," Price said. "You look at their defence and they’ve got [Geva] Mentor and [Karla] Pretorius … they work so well together, I think they complement each other really well.

“In their midcourt they’ve got two fast, short attackers, [Laura] Scherian and [Kelsey] Browne, who had a really good game on Sunday, and then in the shooting circle they’ve got [Stephanie] Wood and [Caitlin] Bassett, the two Diamonds shooters. They’re good everywhere.

“We know that they always step up when it comes to finals time and I think we’re ready for the challenge.”

If the Giants can secure the Super Netball title, there’s a good chance it could spend a weekend or two on Price’s mantelpiece, given she shares her place with the three other team members.

“Me, Jo Harten, Serena [Guthrie] and Kristiana [Manu’a] all live together," she said. “I think we have a good balance. We all know how to have fun, but we also know when to be serious and when to knuckle down … but it’s not all about netball.”