The AFL should not give Carlton and the Gold Coast a priority pick before the Western Bulldogs' first round selection in the 2018 national draft, according to Luke Beveridge.

Speaking after his side's 17-point win over Carlton on Sunday Bulldogs coach Beveridge said he doesn't want the AFL to push his club down the draft order – with the club currently holding selection six – for the sake of giving the Blues and the Suns a hand out. 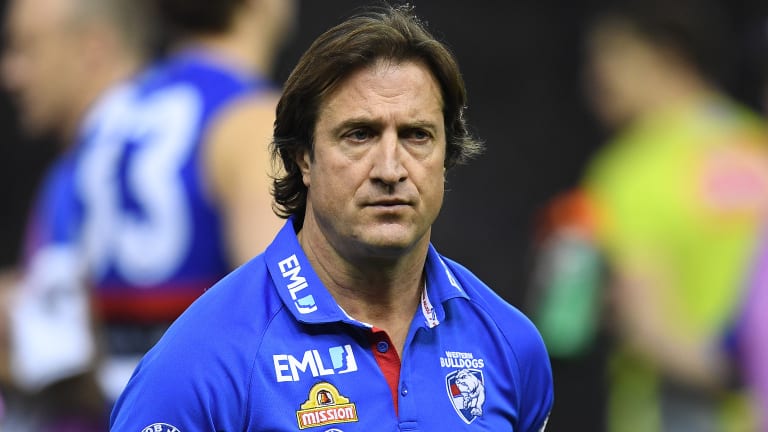 Fair go: Luke Beveridge has spoken out about the need for balance between young and mature lists in use of draft picks.

There is growing speculation the Suns and the Blues will receive priority draft picks but Beveridge said he'd rather see them given after the draft's first round or with the condition that clubs handed them would have to use them to trade in mature aged players.

"We’ll be pretty disappointed if these compensation picks come in before us in the draft," Beveridge said. "Our demographic as far as youth versus mature age isn’t dissimilar [to Carlton and Gold Coast].

"Now we feel like our players are in an environment and a program where they can really blossom and flourish but we are where we are on the ladder, and we are building again and who knows how far away that is.

"Hopefully if there’s compensation they’re either at the back end of the first round or there’s some kind of caveat on it where you need to trade it out for a mature age [player]. But we are anticipating there will be an extra one in between us and the first pick because of [Tom] Lynch, but other than that I’d hope there’s nothing fresh in there … but that’s up to the AFL. It’ll all be well considered but you saw today Carlton are a pretty young team … but they almost beat us."

Carlton coach Brendon Bolton would not elaborate on the matter of priority picks when asked by the media following Beveridge's remarks.

"We've got to dig in for another week and then see where we're at," he said.

The Bulldogs 2016 premiership coach also revealed Marcus Bontempelli is in doubt for the round 23 game against Richmond due to a back injury. Bontempelli was hurt early in round 21 against North Melbourne when he landed on his back from height, and didn't train all week.

The Bulldogs received a down-field free kick after Bontempelli was hit by a Jed Lamb forearm to his back in the last quarter. A scuffle led to a free kick and 50 metre penalty to Lin Jong who kicked what was ultimately the sealer.

Carlton fans booed Bontempelli for going down from the seemingly low contact but Beveridge defended his injured star, who dominated the match regardless. 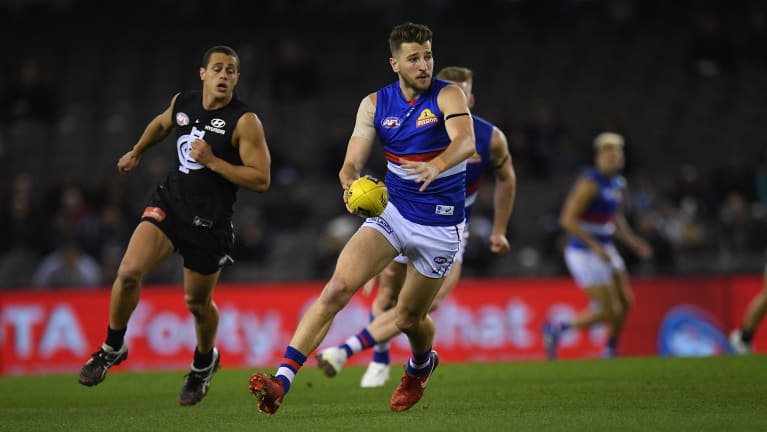 Up and about: Marcus Bontempelli in action for the Bulldogs against Carlton at Etihad Stadium on Sunday.

"He [Bontempelli] is a tough young fella and he got through today but he was under a fair bit of pain and a fair bit of duress so he’s had an outstanding game for a player who has has that to confront," Beveridge said.

"There’s no way Marcus Bontempelli would ever take a dive."

Blues coach Bolton lauded his side's effort for three quarters but was left to rue a final quarter fade out.

"About 10 minutes into the last [quarter] their players with that profile of around 100 to 150 games … they stood up," Bolton said. "We have challenged really heavily around this game requires you to do it over and over again."

Bolton praised the 35 disposal, one goal performance by veteran Kade Simpson, and said both club and player wanted him to play on next year.

"He's a great role model for our football club, [for over] 300 games," Bolton said. "We want him to [play on] we need him to. He'll just get it sorted through his management and SOS [Blues list manager Stephen Silvagni]. So important to have that type of player with our profile of list."

Both coaches also said the safety of players was the most important factor when reacting to a last quarter incident where a bottle of soft drink was thrown onto the ground by a fan.

The fan was quickly escorted from the stadium by security.

"I don't know why or how that happened but we do have a duty to look after our players," Bolton said.