The ACT Brumbies could offer former Wallabies prop James Slipper a Super Rugby lifeline after adding him to a list of recruitment options to bolster their front-row stocks.

Slipper has been battling mental health issues and was banned for two months last season after twice testing positive to cocaine, putting him on the outer with Queensland Reds coach Brad Thorn. 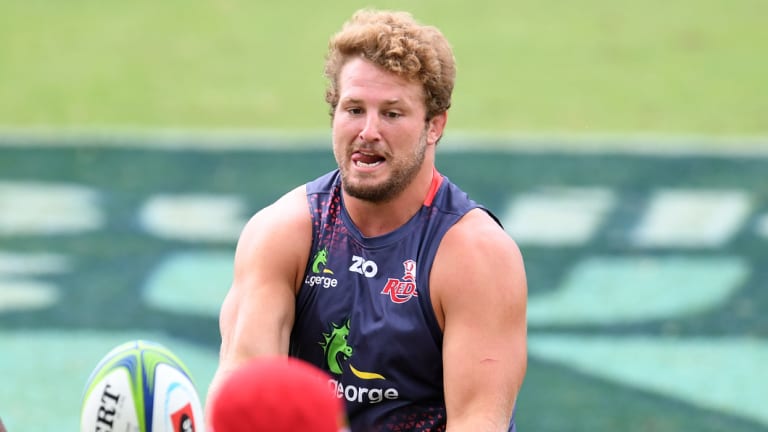 ‘I’m not all fixed, but I’m working hard and seeing the professionals’: James Slipper.

It's understood the former Wallabies and Reds skipper met with Brumbies coach Dan McKellar when Slipper was in Canberra last weekend for the first round of the National Rugby Championship.

McKellar and the Brumbies are casting a wide net to find front-rowers to add to their roster after Ben Alexander retired last week, ending his career as the club's most-capped player.

Thorn has taken a zero-tolerance stance in Queensland, exiling Quade Cooper and Karmichael Hunt and it's unlikely he will recall Slipper to Super Rugby duties next year after his indiscretions.

Slipper, who struggled with personal issues and his mother being diagnosed with terminal cancer, was fined $27,500 in May for breaching Rugby Australia's illicit drugs policy.

The Wallabies, however, invited Slipper to be a part of a squad trial match last month for the first step in his comeback and he played for Queensland Country against the Canberra Vikings last weekend.

He is the most-capped prop in Wallabies history after playing 86 Tests for Australia and, on playing ability, the 29-year-old would be a perfect fit to the Brumbies' forward pack.

But the Brumbies would have to decide whether Slipper would fit into the club and how his presence would affect the already-established culture.

Talks with Slipper have only been preliminary, but the Brumbies do have two prop spots to fill. Wallabies duo Allan Alaalatoa and Scott Sio are locked into deals until the end of 2019 and are the Brumbies' starting front-rowers.

The Brumbies also have Les Leuluaialii-Makin and Australian under-20s prop Tom Ross in the squad.

The coaches are watching the NRC to see how players develop, as well as keeping an eye on players in the New Zealand provincial competition to see if there are any signing options.

Former Australian under-20s bookend Vunipola Fifita has moved to Canberra to play for the Vikings and is hopeful of impressing Brumbies coaches to win a contract.

The Brumbies have fill almost all of their contracts for next year, but are still looking for props and an inside back to join the group.

The club honoured Alexander at the Brett Robinson Awards night last week, presenting him with a blazer as the inaugural member of the Brumbies' 150-game club.

Slipper said last month: "I've obviously gone through a bit of a rough patch and made some poor decisions and I probably wasn’t coping with certain aspects of my life that I was going through at the time.

"I’ve had to address quite a few things, its probably something that is going to have to stay with me for a while, continually trying to work on myself to become a better person and a positive outcome.

"But at the time I didn't see a healthy ending there for a bit.

"I’m not all fixed, as they say, but I’m working hard and seeing the professionals and going well.

"I’m as happy as I’ve been in a long time so that’s probably the most important thing."

Meanwhile, Brumbies captain Christian Lealiifano had dream start to his stint in Japan, slotting a 79th-minute drop goal to lift Shokki to a 9-8 win in the opening round of the Top League.

Lealiifano was playing his first game for the club after signing a short-term deal to play abroad in the Super Rugby off-season. He cooly took a shot from 38 metres to enjoy a brilliant start.