Dandenong Rangers won't restrict their search to experienced names as they seek a new WNBL coach.

The Rangers announced this week Larissa Anderson wouldn't seek a fourth season with the team and they have formed a panel to short-list potential candidates for the role. 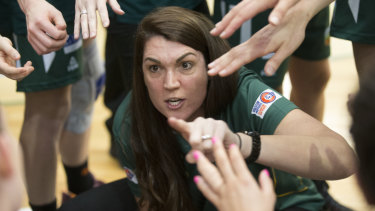 Former Sydney University Flames coach Cheryl Chambers is coming back home to Melbourne so is expected to feature but the Rangers won't rush in case any of the figures still involved in the WNBL finals might be interested.

It's understood the role would be full-time during the WNBL season with options to add further duties depending on the applicant.

The Rangers only have forward Sara Blicavs contracted for next season so the new coach will have the chance to shape the team in the way they want. Import centre Kayla Pedersen has retired so they will have at least one new import next season.

"This process has only just begun and we haven't spoken to anybody at this point in time," Icke said.

"It's a small industry. We will look to see who is out there and look to chat to people who have coached at this level before or have done so recently but that's not to say we won't also talk to people who have come through coaching pathways and are looking for a chance to coach in WNBL.

"We will have an expansive search program but we need to be mindful of the timeframes."

The Rangers made significant improvements to their training facilities in the last year and believe they are well placed to bounce back into the title race next season.

But finding a coach who fits their needs remains top priority.

Bendigo Spirit is also looking for a new coach, as are the Flames, so the market will be more competitive than in recent years.