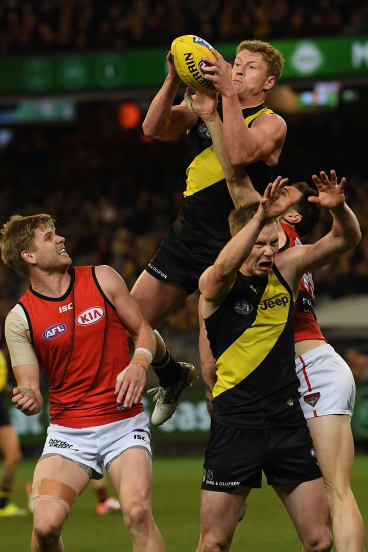 Josh Caddy rises over the pack.

Richmond locked in top spot for the year and extinguished Essendon’s slim finals hopes in the process with an eight-point win at the MCG last night.

It was their 20th consecutive win at the MCG and puts the Tigers in the box seat in their quest for back-to-back premierships.

Despite Essendon charging late to threaten the run, Richmond held firm and remain warm favourites to win three finals in a row.

Meanwhile Essendon will have an off-season to reflect on a year that has failed to deliver on its promise, with the ground they needed to make up after losing six of their first eight games proving too much.

Last night all it took was for Richmond to crank up the tempo after half-time to tilt the match their way.

In that vital third quarter, the Tigers kicked five goals to the Bombers three as Dustin Martin destroyed his hapless former teammate Matt Dea with two goals and Josh Caddy added two to his own tally.

When Liam Baker kicked the first goal of his career, after pressure forced a turnover deep into time-on, the Tigers led by 27 points and had the game in their control.

Essendon could not move the ball from defence to score as they like to and when it mattered the Tigers put their foot on the pedal.

The lift in intensity in the third quarter came after back lines had controlled the game in the first half with the Tigers pair Alex Rance and Dylan Grimes masterful. 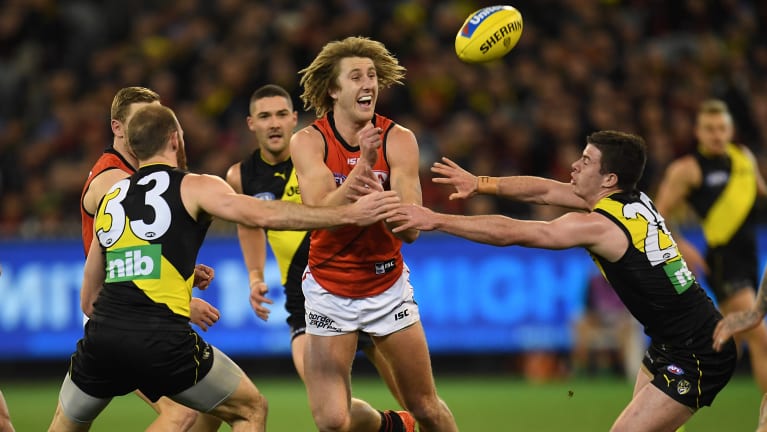 Dyson Heppell fires off a handball under pressure.

One moment in particular in the first quarter, when Grimes left his man to interrupt Anthony McDonald-Tipungwuti as he charged towards a loose ball on the half-forward flank, highlighted the experienced duo’s importance.

Grimes’ intercept sent the ball back into Richmond’s forward line where Dustin Martin marked and kicked the Tigers’ fourth goal.

At that point Richmond’s four leading goalkickers from 2018 in Jack Riewoldt, Josh Caddy, Jason Castagna and Martin had all kicked one goal each with the quartet combining to kick 11 of Richmond’s 12 goals. Grimes did not let up all night, spoiling, smothering and running with the ball to confirm he doesn’t have to get much of the ball to have a major influence.

Essendon relied more in defence on Michael Hurley bringing the ball to ground where a crowd would congregate and make it difficult for Richmond’s small band of quick forwards to find space.

He had a good ally in Aaron Francis, who was impressive in just his fourth game this season, marking the ball well with six intercept marks and being strong in the contest. 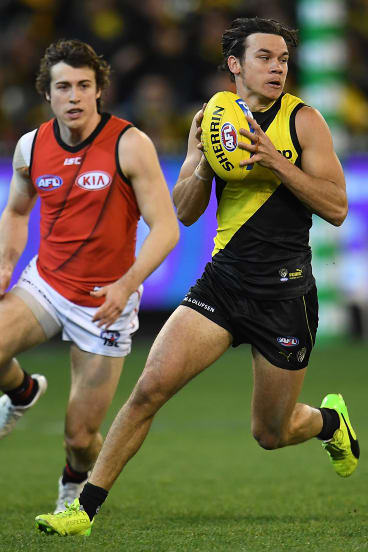 But the gap in the two teams remained apparent as Richmond forced the opposition to play fast, their method of closing down space at pace making the contest more like the card game snap than football at times.

Essendon took time to adjust and even though they tried to use congestion as a weapon they found it very hard to keep the ball in their forward half.

The eventual inside 50 count was so heavily stacked in Richmond’s favour that it was a credit to the Bombers’ back line that they were able to keep their team in the game for as long as they managed to.

At times in the second quarter, when they slowed down the Tigers’ ball use and made it hard for Richmond to score, they looked likely to make a game of it.

One incident sure to cause discussion came in the first quarter when Essendon midfielder Devon Smith threw a haymaker at Richmond’s Kamdyn McIntosh, with both players lucky the clenched fist didn’t connect.

If the punch had connected there would have been some carnage as McIntosh would have been hurt.
Thankfully it didn’t and there was no dampener on the great spirit invoked at the beginning of the game when Bachar Houli and Adam Saad accompanied their respective captains to the coin toss as a symbol of unity. 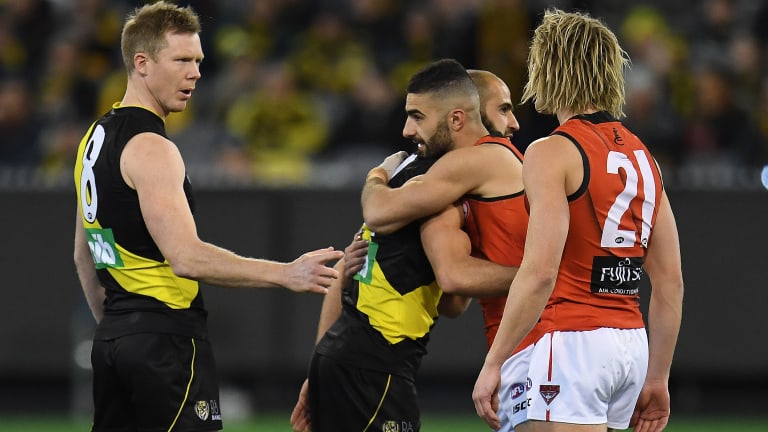 Jack Riewoldt and Dyson Heppell are joined at the coin toss by Bachar Houli and Adam Saad in a show of unity.