Home » Sport » Roosters wary of getting Cooked in blockbuster clash

James Tedesco enjoys playing with Damien Cook more than he does against him.

“I loved my time with him playing Origin, I didn’t really know him before that. He’s a great bloke and hopefully we can shut him down.” 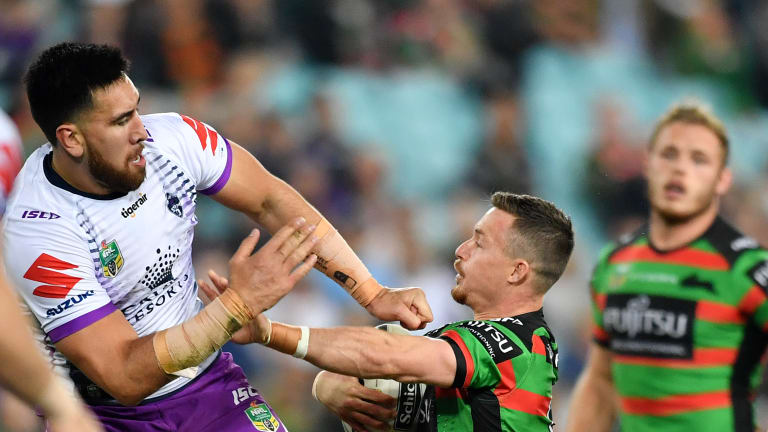 Playing above his weight: Damien Cook clashes with the Storm’s Nelson Asofa-Solomona

It is no easy task, as Cook is arguably the best player in the competition at present. The South Sydney hooker has firmed into favouritism for the Dally M medal, overtaking Newcastle wonderkid Kalyn Ponga after a series of standout performances.

The Roosters-Souths clash on Friday is one of the most anticipated of the season. In the run to the finals, there have been a number of blockbuster clashes that have been mooted as potential grand final previews, but this would truly be a decider for the ages.

The foundation clubs come into the ANZ Stadium encounter in outstanding form. The Rabbitohs came from behind to claim premiers Melbourne, while the Roosters are beginning to click after a slow start to the season.

This contest is a promoter’s dream. How will Angus Crichton fare against the club he is shifting to? Can anybody stop Latrell Mitchell? Will the winner emerge as the new premiership favourite? While there are any number of storylines to emerge, the result could well hinge on whether the Roosters are able to nullify Cook’s blistering speed out of dummy half.

“Whenever there’s a quick play the ball, he’s off and creates,” Tedesco said.

“They have a big forward pack and he sees opportunities and takes them. His speed is pretty hard to stop.

“I love playing with him and I love watching him. He’s a big threat when you come up against him.”

Tedesco and Cook were among NSW’s best in a rare Origin series victory, the pair combining brilliantly against the Maroons.

“Whenever a quick play the ball, his speed works well for me.

“I get on the back of that and he takes opportunities whenever he sees them. If there’s a third man back or a quick play the ball, he’s off. It will be a big focus for us to nullify those quick play the balls and nullify him getting out of there pretty fast.

“He takes opportunities when they are on and gets his forwards forward momentum. He’s going to be a focus for us, but we’re going to concentrate on ourselves. We know what we need to do to get the win.”

Roosters hooker Jake Friend, himself in a rich vein of form, welcomed the opportunity to test himself against Cook.

“Doing a job on their middles will obviously help that – he plays a lot off the back of those middles that are playing really well – but he’s in great form. It’s going to be a tough job on Friday night. If we can win those tackles on the big boys and have a set line we’ll nullify the chances he’s going to get to pick us apart.

“I’m excited to come up against Damien who is playing really well and I enjoy those battles against the top hookers from the top teams. It’s something I’m looking forward to personally.”

This game could go a long way towards deciding the minor premiership. Souths are currently on top of the ladder, two points ahead of the Storm and the Roosters. However, the latter has a superior for-and-against, meaning they could leapfrog to the top, at least until the Storm’s clash with the Sharks is decided on Sunday.

The Roosters have a game breaker of their own in Mitchell. The Blues centre has carried his continued his Origin form to become the form outside back in the competition.

“The confidence he got performing at Origin level, we all know he’s got the talent but he was able to show that at an elite level,” Tedesco said.

“The confidence he’s bringing back to us at the Roosters, it’s just great to see.

“He loves playing footy and getting the ball he can create something out of nothing.