Home » Sport » Sack Cheika? A quicker fix for the Wallabies can be found on the field

Listen. Cock your ear to the wind. There! Hear it? It is the sound of axes and knives being sharpened, even as the jungle drums beat to that familiar deadly rhythm, building to the bloody crescendo.

Yes, friends, we are right on the edge of a ritual slaying. And not just the one about to take place in Canberra! 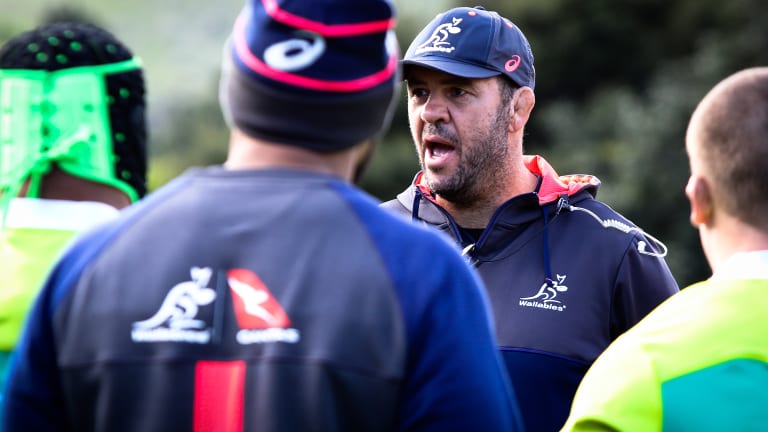 For it seems the leadership of the Wallabies is also coming into play.

Readers of these pages will be familiar with the work of Greg Growden, my esteemed erstwhile colleague for well over 30 years, most of it on the rugby round.

On Monday, writing for ESPN, Growden issued less a call to arms for the Wallabies than a call to take an axe to the tenure of the incumbent Wallaby coach.

"Come in Michael Cheika and your merry men, your time is up," he thundered. "If Rugby Australia is serious about a productive 2019 Rugby World Cup campaign as well as regaining the faith of thousands of disenchanted Wallabies supporters, they must get rid of Cheika, and all of his back-up coaching and managerial staff now. Not at the end of the year, or after the World Cup. Right now.

"Drastic action is required because Cheika's Wallabies are going absolutely nowhere, sending Australian rugby into a frightening nose-dive. Cheika must pay the price for a team whose appalling skill level makes a mockery of the professional footballer tag, and arrogant, holier-than-thou attitude does not warrant any respect from those sick and tired of a pedestrian outfit who constantly makes fools of themselves in the big games."

These, I kid you not, proved to be merely his opening remarks. I mean it. At this point, Greg had barely cleared his throat!

His thrust was that when the results are as bad as we have seen, then someone has to pay the piper, and as coach, Cheika must bear responsibility.

Gutted by the Wallabies' craven capitulation in the second half – going into the break with a 6-5 lead and then allowing the All Blacks to put five tries on them, Growden told of angry fans banging on the windows of the coach’s box, giving Cheika the thumbs down and even blowing raspberries. The article accompanying the piece had a poll that 4,000 people had responded to, and of them no less than 77 per cent agreed with him.

Yes, it seems of the rugby community, only 23 per cent think Michael Cheika should stay. (I know, I know, as low as it is, that figure is still about four times the public support Peter Dutton has, and he is about to become Prime Minister – but don't get me started!)

This is not the first call for Cheika to go, and I suspect it won’t be the last, but let us put it down for the moment as the most passionate call yet for his resignation from an influential rugby scribe.

Growden points out that in Cheika's tenure to date he is only batting at 51 per cent, and even that is built on rugby minnows like the USA, Uruguay, Italy and Japan, while we’ve barely troubled the scorer with wins against the major rugby nations – and he has only won one of his last six Tests.

So … case closed? I say, not yet. I take Growden’s point that these are tough times, but am not convinced, for starters, that anyone right now can do better.

And there is no doubt that Cheika actually is an accomplished coach. The way he had the Waratahs playing to win the 2014 Super Final still thrills the cockles of the soul all these years on. And he did get the Wallabies to the 2015 World Cup Final against all odds.

So we know he can coach! We just need to know why it is not working now.

My suspicion is that perhaps Cheika’s sheer intensity has worn the players down, which frequently happens with high-tensile brilliant coaches with Alan Jones being the prime example. If that is the case with Cheika, the ARU really will need to look elsewhere.  But not right now and certainly not mid-Bledisloe.

What is needed right now is for the whole lot of them to calm the ruck down, and stop killing each other with such bloody glee, so… Sorry, wandered into the Canberra story again.

No, what is needed with the Wallabies right now, is work out how to play for 80 minutes, like they played for 40 minutes last Saturday. As to what specifically to fix, that really is bleeding obvious.

When we lose seven of our own lineout throws, and give away six scrum penalties, it's like having a tennis player who can’t serve, a basketballer who can’t shoot, a golfer who can’t swing. We MUST get our own ball! How to fix it, quickly?

In the scrum, the old line used to be that the two most important players were the tight-head prop and the reserve tight-head prop. I don’t know who the two physically strongest and most immovable tight-heads in the country are, but without them in the side we will always be pushing it uphill.

As to the lineouts, there is a very simple thing to do when you are getting creamed: two-man lineouts. When done properly, they are simply unstoppable and it only needs a bit of co-ordination between the two forwards and the hookers to work out the way to win it. And yes, I know, coaches say ball from two-man lineouts is not as good as from full lineouts, because you don’t suck in the opposing forwards, but I don’t care. It is a hell of a lot better than the All Blacks winning it! And why the Wallabies didn’t have this as an alternative when the eight man lineout was obviously not working is completely mystifying. And, yes, unacceptable.

I could go on, but won’t. I repeat. I take Growden’s point. But rather than giving Cheika notice, I would put him on notice. We do need some results, and soon. And whatever else, you need to demonstrate that we can at least win our own bloody ball!