Rookie winger Jordan Pereira may not have just changed the game but even rescued the Dragons' season with two crucial plays that sealed St George Illawarra's spirit-lifting 24-14 victory over the Knights on Saturday afternoon.

The Dragons had looked headed for a seventh loss in nine games as they trailed Newcastle at a packed McDonald Jones Stadium. But just as the Knights went in search of more points midway through the second half, Pereira raced in from his left wing and produced a bone-jarring tackle on Mitch Barnett. The lock hit the deck and could not get the ball free to his winger. 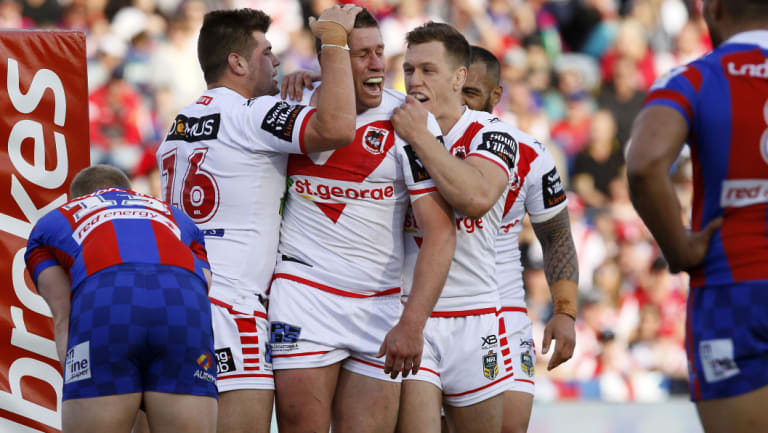 Muscling over: Jeremy Latimore celebrates scoring a try during the Dragons’ second-half comeback.

Four minutes later, Nene Macdonald scored a long-range try to give the Dragons a lead they never surrendered.

Mitchell Pearce was absolutely brilliant for the Knights, with his right boot providing Ken Sio with a try and setting up a thrilling finish. But when Sione Mata'utia spilled the ball deep inside his own half, Pereira produced his second crucial intervention of the afternoon, scooping up the ball and racing a short distance to spark celebrations.

The Dragons moved into sixth place and will need the Broncos to win by 21 points or fewer if they are to host a final next week. 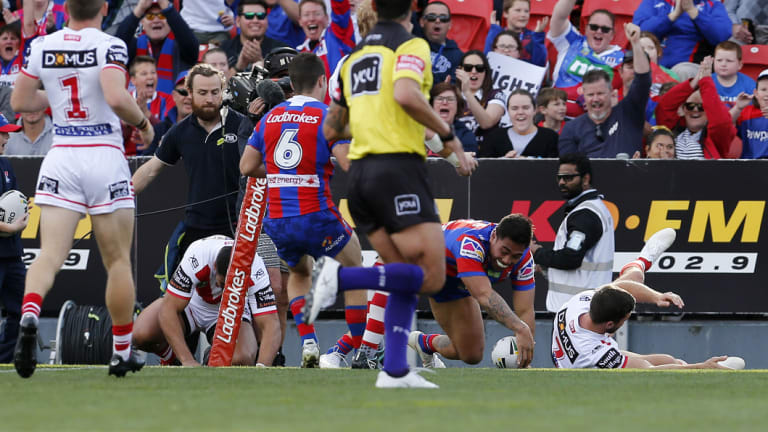 If the Dragons were in the kind of form they boasted at the start of the season, they would have put 50 points past the Knights. Instead, coach Paul McGregor would have been frustrated with plenty of things from his side.

The decision not to play skipper Gareth Widdop, who has recovered from a shoulder injury, looked a dud call until Pereira flattened Barnett.

Matt Dufty, who was on the end of a verbal spray from James Graham in the sheds after last Sunday's 38-0 drubbing to Canterbury, scored a long-range try, but spilled a Pearce bomb to give the Knights one final sniff.

Pearce was nothing short of outstanding in his 250th game. This will be one of the few Septembers he will be on holidays. The crowd of 24,662 for the annual Old Boys' Day know they had backed a winner with the polarising halfback.

Had Pearce not gone down with a torn pectoral muscle earlier in the season, the Knights could have been pushing for the finals themselves.

The Dragons led the competition for most of the year, but the past two months have been forgettable.

Rookie centre Zac Lomax certainly had an entertaining first half, missing a penalty goal from in front, then being denied a try that looked a certain four-pointer.

Playing just his second NRL game, 18-year-old Lomax pounced on a Ben Hunt grubber, only for the Bunker to rule he had failed to ground the ball.

He later spilled the ball on his own 10m early in the tackle count, gifting the Knights another attacking set.

While the Dragons went through the motions, the Knights were not much better.

Even when Shaun Kenny-Dowall scored just before the break, their set looked like it was going nowhere.

They coughed up their share of the ball and gave the huge home crowd little to cheer.

The Dragons were the first to score in the second half when Jeremy Latimore stood in a tackle and then dragged three defenders over the line to cross next to the posts.

The Dragons did well to defend their line, but continued to invite the Knights to attack, with Macdonald spilling the ball when he took a tap for a seven-tackle set.

The home side enjoyed several sets before Pereira came off his left wing to produce the huge hit on Barnett.

In injury news, Jack de Belin sent a scare through the camp when he clutched at his left ankle in the first set. Tyson Frizell also went off for a short spell in the first half to undergo a concussion test.