Australia's Minjee Lee has taken a one-stroke lead at the Women's British Open after chalking up a seven-under par 65 in her opening round at Royal Lytham.

The world No.8 carded six birdies and an eagle three that came from a 30-metre right-to-left putt on the par-five 15th hole. 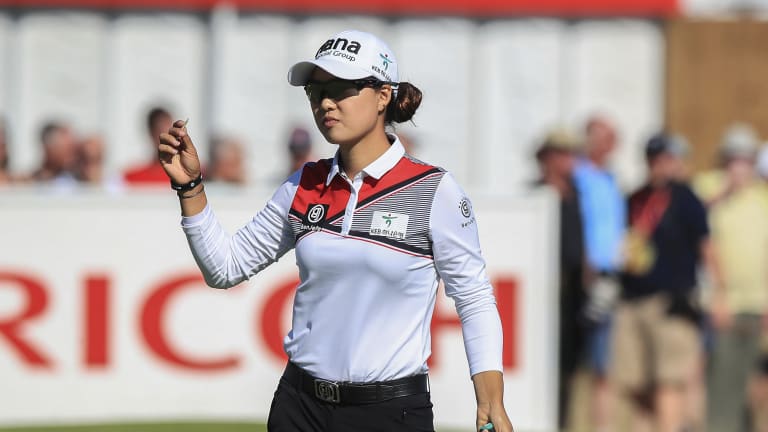 Frontrunner: Australia’s Minjee Lee acknowledges the crowd after her opening round.

Japan's Mamiko Higa was a shot behind Lee, while five players – Georgia Hall, Teresa Lu, Park Sung-hyun, Lee Mi-hyang and Pornanong Phatlum – were a further stroke adrift on a day that started with showers and a breeze before brightening up.

Only a series of missed putts stopped Lee from winning the tune-up for the fourth major of the year, last weekend's Ladies Scottish Open on the links at Gullane, where Jutanugarn prevailed by one shot.

The West Australian finished second in that event and said her performance had given her the confidence to believe she can win a first major championship.

"I know I can play around a links course and handle those conditions so I'm in a good place," Lee said.

"I did hole quite a lot of putts from just inside 30 feet (nine metres) today.

"I don't think I holed any that were really short. I've been hitting it pretty solid and really happy with where I am right now."

Former US Women's Open champion Michelle Wie was forced to withdraw after 12 holes of her opening round with an ongoing hand injury.

In a statement released on social media, the 28-year-old American said: "I have been doing everything humanly possible (besides giving it proper rest) this past couple of weeks to get my hand healthy enough to play this event.

"Unfortunately, it wasn't enough," Wie wrote in the statement.

"I gave it my all today but I just couldn't handle the pain any longer. I'm devastated that I had to withdraw mid-round, but I felt that if I kept pushing through the pain, I would have injured my hand further."