Home » Sport » Search for panache: Can the Saints bring sexy back? 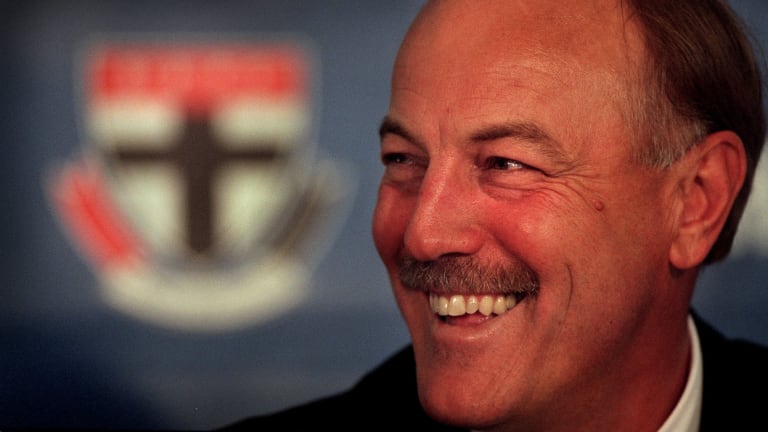 New sensation: Malcolm Blight joins the Saints as coach in 2001.

On the eve of the Sydney Olympics, a maverick new St Kilda president led a posse of players, club officials and an influential player manager to meet Malcolm Blight at a Chinese restaurant on the Gold Coast.

Rod Butterss, his then close friend and board member Grant Thomas and their chief executive Brian Waldron, took three of St Kilda’s most hallowed – Robert Harvey, Nathan Burke and Stewart Loewe – along with the talented and sometimes strife-prone Peter Everitt to meet the mercurial coach-in-exile.

As Waldron recalled, Blight was signed on a napkin at the Chinese restaurant for what was then an astounding $1 million a season to coach the Saints in 2001.

The player manager wasn’t merely a player manager, either. Ron Joseph had recruited Blight to North Melbourne from Woodville and was a cornerstone of North Melbourne’s revival under Ron Barassi when the Kangas used the 10-year rule [a fleeting form of free agency] to persuade champions Doug Wade, Barry Davis and John Rantall to take a ride on the Barassi train.

Blight lasted only 15 games at Moorabbin, before Butterss and his board lowered the boom, in what remains one of the most stunning sackings of a coach in AFL history. ‘‘Malcolm did not share our core values,’’ said Butterss, who led an administration with more a touch of cowboy.

But the Blight appointment was still a game-changer for the Saints. His mystique – and the accompanied sense that the Saints were on the march – delivered them out-of-contract Aaron Hamill from Carlton and home-coming Fraser Gehrig from the Eagles, who was also managed by Joseph.

The Saints used the pre-season draft to snare that pair – forcing trades on their terms – while landing several others, including Stevie Lawrence, Brett Voss, Heath Black, and Matthew Capuano over the course of 2000 and 2001. In those springs, they added Nick Riewoldt and Justin Koschitzke at picks one and two [2000], then Luke Ball, Nick Dal Santo and Leigh Montagna. 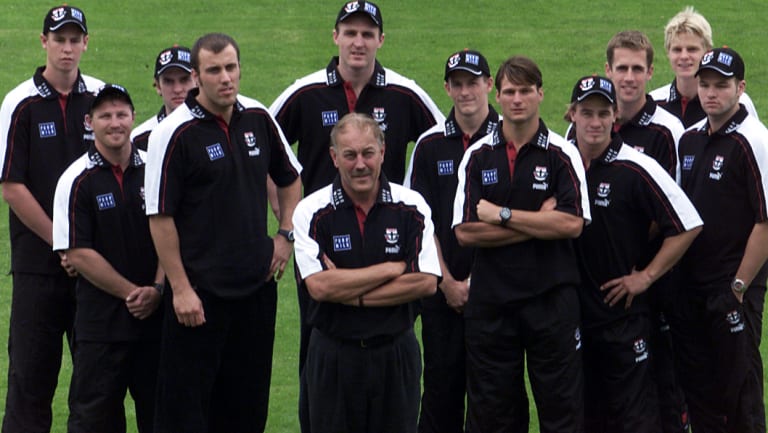 Malcolm Blight and St Kilda’s new players and coaches in 2001.

Blight would be replaced, contentiously, by Thomas, who – whatever his failings – duly took the Saints into premiership contention in 2004 and 2005, by which stage he and Butterss had fallen out. Ross Lyon took over.

Today, it is hard to imagine any club managing to land an uber coach and then a succession of players in one frenzied month. Alastair Clarkson is probably the only coach who could deliver players, Blight style, and he’s contracted for 2019 and looking at a two-year extension.

Today, the Saints are utterly lacking in the kind of sex appeal that Blight bestowed upon them in the spring of 2000, and which the club has often had – despite serial failure – over its 121 years in the VFL/AFL competition.

They don’t have players who can turn either games or turnstiles. They don’t play a style that excites. Collectively, they’re a hard-working group with minimal flair. Jade Gresham is one of few with game-turning gifts. The club of ‘‘Cowboy’’ Neale, Carl Ditterich, Trevor Barker, Tony Lockett, Nicky Winmar and Barry Hall has no one of that charismatic ilk.

The new president, Andrew Bassat, was briefly part of the eccentric Butterss regime. As the co-founder [with his brother Paul] of Seek, he’s a left-field entrepreneur and strategic thinker who needs to remake the Saints into a club that can – once again – attract players, fans, staff and sponsors, in that order.

To do so, he will need to rediscover the sexiness – the spirit of the raffish suburb that gave birth to the Saints – that left the club around the time of their catastrophic shift to Seaford. The Saints cannot replicate the cowboy culture that was evident in the Butterss-Thomas heyday – the game’s professionalism will not allow those excesses – but they can find some missing panache.
Perceptions can change quickly. The Brisbane Lions gained a whiff of attractiveness simply by persuading Luke Hodge to move north.

St Kilda will not be successful by emulating Hawthorn; they must make a virtue of their maverick history. The Saints need to rediscover that edginess that might make them appealing and hip, without descending into the scandals that cost them sponsorship dollars in the years after the grand finals.

Bassat’s first media appearance was notable for his statement that, under his leadership, the Saints were ‘‘highly unlikely’’ to remove Alan Richardson before the 2019 season.

In some quarters, ‘‘highly unlikely’’ was viewed as a phrase that allowed the club wriggle room if they wanted to move Richardson on, despite a contract for next year and a conditional 2020.

Recognising how the comment might be read, it is understood that Bassat immediately contacted Richardson to reassure the coach that he had the new president’s support.

‘‘The club is putting together a coaching panel under Alan that we are confident will take us into 2019,’’ said Bassat, who was likely simply stating the unvarnished truth, that it is ‘‘highly unlikely’’ than anyone besides Richardson will be coach in round one of next year.

Richardson has been heavily involved in the discussions with incoming coaches, led by ex-Carlton senior coach Brett Ratten, and in the player trade talks. The Saints are proceeding on the basis that he will coach next year. 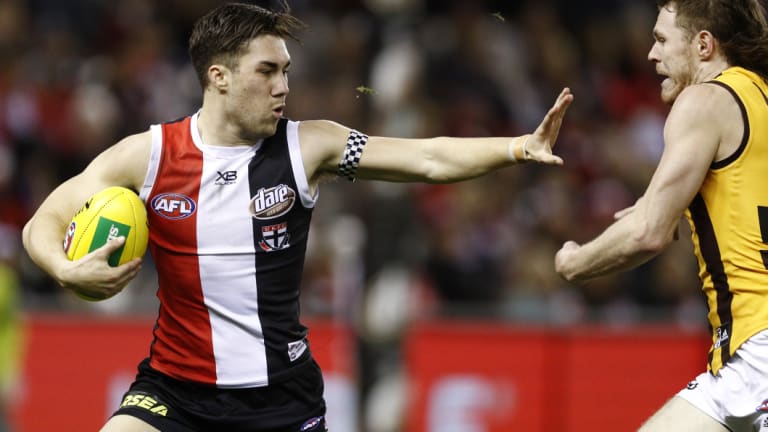 Jade Gresham is one Saint with game-turning gifts.

The view within Moorabbin is that the playing list is the primary problem, but that the coaches did not perform well enough in extracting from the players this year. It follows that Richardson is ‘‘highly unlikely’’ to be coach in 2020 if there is not significant improvement.

Adam Kingsley’s departure to Richmond followed St Kilda’s offer of only one year to Richardson’s well-regarded senior assistant, who also recognised that after eight years, it was time to find another home.

While St Kilda’s empowered football boss Simon Lethlean has been aggressive in the player market, the club has two issues in attracting players such as Dylan Shiel, Andrew Gaff [headed to North if he leaves West Coast] and Scott Lycett.

The first is their lowly ladder position. Second is the unfortunate lack of draft picks, the Saints having already traded their second and third-round picks.

Dan Hannebery is a potential recruit, in what would indeed be a daring throw of the dice. But the Saints are reluctant to part with pick No. 4 in the draft, and rightly so.

It should not be part of any deal for Hannebery – merely picking up his massive three-year contract would be of sufficient benefit to the Swans.

Blake Acres and Luke Dunstan shape as trade bait, if there are takers. Jack Billings would fetch a nice pick, but as a player with some skill and a (latent) touch of flair, he’s probably of greater value to the Saints than the prospective pick.

Whatever Lethlean and his new list manager James Gallagher decide and whatever is possible, the Saints are better to have a crack – and that includes trading players out – rather than sitting idle, spending their one early pick on a safe choice and hoping that a revamped coaching panel will turn it around.