More than a quarter of the one million members of AFL clubs in 2018 hold memberships that give them access to fewer than 11 games during the season. 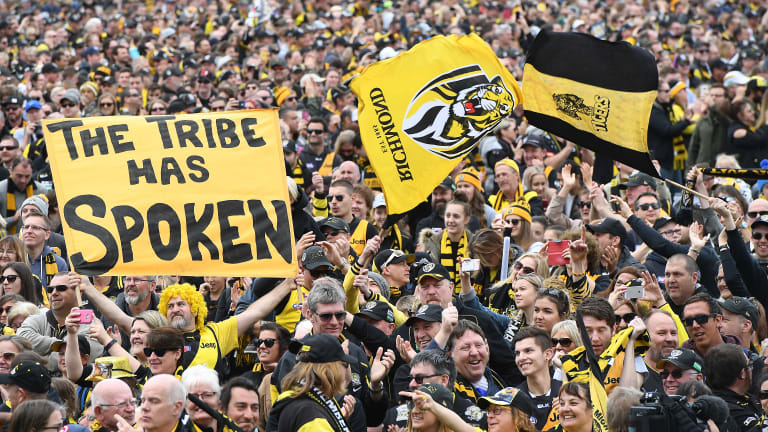 Although membership numbers have been on the rise for the past 30 years, the 11.1 per cent increase in membership between 2017 to 2018 was the biggest year on year jump since the Giants entered the competition in 2012.

Most of the growth in the number is understood to have been due to an increase in sales of three and five game membership packages, while Richmond’s barnstorming run has also propelled membership numbers with the Tigers attracting 28,000 more members this season.

"Clubs and the AFL working with the clubs are able to better understand their audience and offer packages that work for everyone," McLachlan said. "We used to have an 11-game membership package and now we’re able to talk to people with different needs, such as three-game, five-game or kids’ memberships and we are better able to understand the needs of our supporters."

Club sources told The Age that the decision to make restricted game memberships part of a proportion of Auskick packages this season contributed to the growth, however an AFL spokesperson said the change had not had a material effect on the shift in numbers.

In previous years Auskick members would have received free entry to games as part of their registration but the new approach now gives clubs the opportunity to communicate directly with young members.

Clubs believe the approach will help to attract and retain supporters who are beginning to support clubs and attract those who are being exposed to the game for the first time.

The rusted-on supporter base remained strong with 456,633 memberships bought in 2018 that could be termed traditional memberships.

These "traditional memberships" enable members to attend about 16-17 games per season or attend a club’s 11 home games and also create the opportunity for members to purchase finals tickets in the first three weeks of finals.

In figures released to The Age the AFL confirmed that 345,079 people had 11-game home membership and 111,554 people had home and away memberships that normally guaranteed entry to at least 16 games.

There were also a number of hardcore football supporters who held stadium memberships or AFL memberships, with the exact number of members in that category unavailable at this point.

However in a sign of the changing market and in recognition of the changing connection of supporters to the game in different parts of the country the AFL sold 272,599 memberships that were either general admission, three game, five game or fewer than 11 game memberships.

Some clubs package up premium games with other games as part of their membership offering while clubs in emerging markets such as Greater Western Sydney need to take a non-traditional approach to membership.

The AFL believe the Giants have been one of the success stories with their membership figure rising to 25,243 this season after attracting 10,241 members in their first season, while McLachlan said he believed the Gold Coast would be able to attract more than the 12,108 members they signed this season when they started winning.

The 279,261 members remaining to reach 1,008,494 included members of clubs without entry rights, AFLW members, those with stadium or AFL memberships and Auskick members.

McLachlan said the growth in membership numbers was a sign that clubs were becoming more adept at catering to members needs.