The AFL says there is no solution yet to avoid the type of contentious score review that saw Josh Jenkins' match-winning goal stand at Adelaide Oval on Saturday night.

The league's score review system is again in the headlines, this time for what Port Adelaide coach Ken Hinkley described as a "monumental mistake" in allowing Jenkins' goal to stand in the Crows' three-point win on Saturday. 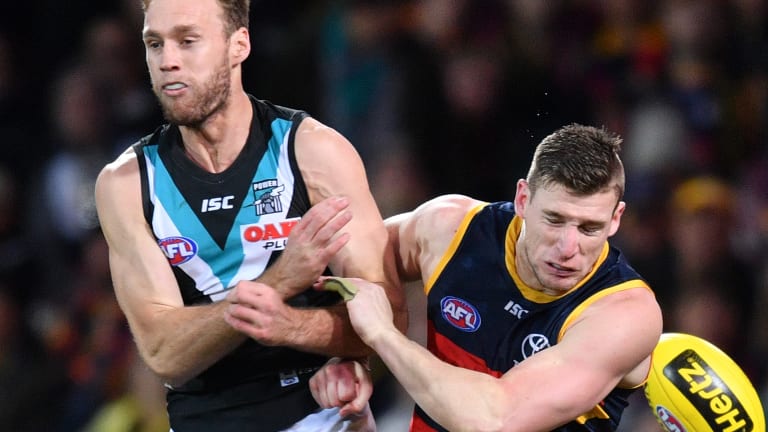 Josh Jenkins’ match-winning goal in the Showdown has caused controversy.

Power great Kane Cornes and Essendon champion Matthew Lloyd were also critical of a lack of cameras on hand to confirm whether Jenkins' shot had brushed halfway up the post – something the player himself thought had been the case.

The AFL has ticked off on the goal, releasing a statement soon after the match declaring the score review official had analysed all relevant replay angles for 23 seconds and that there was no clear evidence that warranted overturning the goal umpire's initial decision.

"It is the AFL determination that after accessing all relevant vision this evening, it supported the decision of the reviewer to confirm the goal umpire’s decision of a goal, with no clear evidence beyond reasonable doubt to make an over-rule," the statement said.

Jenkins immediately felt the ball had hit the post, and told his teammates to set up defensively. He later told Fox Footy he thought the ball hit the post but it had been cleared by the score review system.

Cornes said for the AFL to not have goal-line technology at the Adelaide Oval was a "disgrace" but AFL spokesman Patrick Keane said on Sunday there were goal-post cameras at all grounds "but they can't help with a high-ball above them".

Keane said there were no solutions yet for how to clarify whether a ball had hit the post high up and there had been no recent discussions among league brass about this.

One offbeat solution mentioned among the football industy was to have a sensor in goal posts, which would illuminate should the ball brush the post.

Cornes also called for more cameras at all venues to help with contentious shots at goal, describing the limited vision used on Saturday as grainy and inconclusive.

Football commentators have noted that this match was a Saturday twilight fixture, and would have had more cameras had it been on a Friday night at the MCG or Etihad Stadium.

The defeat leaves the Power fighting to remain in the top eight.

"Let me be really clear right from the start, Adelaide deserved to win, they were the better team in a really close game," Hinkley said.

"But to deal with that last moment, where the player acknowledges it's hit the post and the AFL, in a billion-dollar industry, can wreck seasons for football clubs.

"If I was the AFL, I'd be embarrassed and disappointed in an industry that's so important to so many people. (The AFL) will come out and say they got it wrong, but the technology should have changed that.

"The technology should have made sure this monumental mistake in a football season shouldn't have appeared."

Lloyd said on The Sunday Footy Show it was a "disgrace" that this had happened.

"The reason that came in, Tom Hawkins hit the post in a grand final (2009), and that's the exact reason we said we need this," he said.

"You know why it took only 23 seconds, because they had really no vision to go off. It should have been going for 40 seconds, so we can get this decision right. The technology wasn't right so we had to pay it as a goal. It's just crazy in 2018," he said.

Hinkley said he would not seek a response from the AFL.

"The score review is there to make sure this doesn't happen, and it continues to fail," he said.