Australian Cameron Smith believes all the pressure is on the FedEx Cup heavyweights as he attempts to bag a near $US12 million ($A17 million) payday at this week's Tour Championship.

The 25-year-old will make his debut at the 30-man finale at Atlanta's East Lake Golf Club on Thursday (Friday AEST), where the top five seeds can automatically claim the FedEx Cup with a Tour Championship victory. 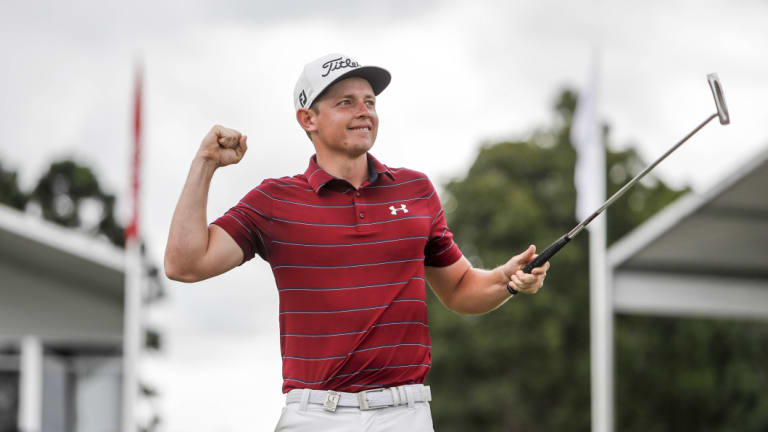 Contention: Cameron Smith can earn himself a massive payday if he plays well this week.

Smith will fly under the radar at East Lake, but at 10th on the FedEx standings, courtesy of consecutive third-place results in the opening two playoffs events, remains well within reach of winning the lot.

A FedEx Cup title for Smith would require him to win the Tour Championship and have a perfect storm of results from the top-five seeds, starting with top-ranked Bryson DeChambeau finishing in a three-way tie for fourth or worse.

While Smith would secure a $US10 million bonus if he was to pull off the inconceivable and become the first Australian to win the title, he would also bank $US1.6 million for winning the tournament itself.

"It's been my main goal all year to make the Tour Championship and I'm in with half a chance (in the FedEx) as well which is even better," Smith said.

"Personally, I would actually love to be a top seed so you know a win here gives you the FedEx Cup.

"But there is definitely added pressure for them because they're teeing off knowing there's a lot on the line, whereas the rest of us need the chips to fall our way."

"It's definitely not a bombers course; anyone can win here," Smith said.

"You just have to hit it straight because the rough is so thick and unpredictable and the greens are firm and fast."

Smith says he is happy just to have made the Tour Championship, whose benefits include guaranteed starts in all four majors the following year.

"That takes a lot of stress off next year because you can pick and choose your events for the whole season and tailor it to peaking around the majors," Smith said.

While Smith leads the Australians on the FedEx standings, Jason Day follows in 12th place while Marc Leishman (29th) rounds out the contingent at East Lake.