Brisbane Lions defender Nick Robertson did his best to create a little interest in this, the 16th QClash between the Lions and Gold Coast Suns, by labelling the Suns as ‘‘soft’’ during the week. It displeased his coach Chris Fagan, excited the football media, and set the tone for what historically is a willing contest.

It took a quarter and a half for that antagonism to alight, Sean Lemmens catching young Lion Brandon Starcevich around the chops with a coathanger. That was the cue for Mitch Robinson, never one to take a backward step, to storm in, and Dayne Zorko went down in the ensuing mini-melee. 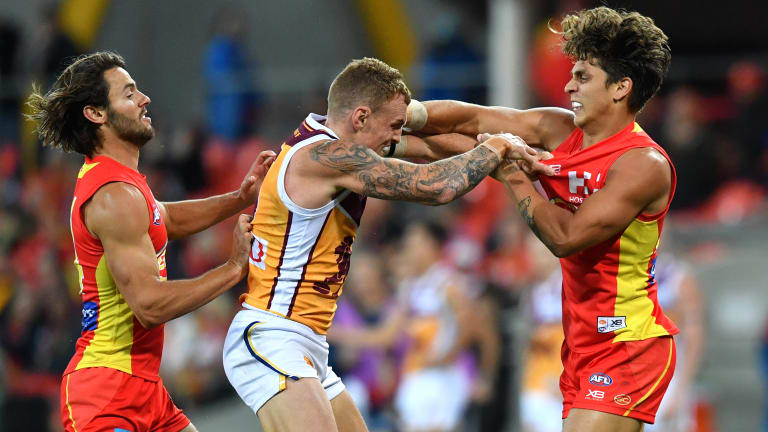 From there, the longer the match went, the more foolish Robertson’s sledge appeared. The Suns were well down on talent, missing half a dozen of their best players, but pushing their more fancied and glamorous rivals all the way. The Lions scraped home by four points, but it was their least impressive win this year.

They were a little fortunate, too. Allen Christensen, who had a huge final quarter, was the beneficiary of a 50-metre penalty when Nick Holman encroached into the protected area. It was a line-ball call, and Christensen’s goal gave his side back the lead.

Two more to Dayne Beams and Lewis Taylor was enough to hold the Suns out from there, but it went down to the last seconds, Jarrod Lyons snapping a late goal with two minutes to go to give his team a chance. It took cool heads – Beams, Harris Andrews and Stefan Martin – to get the Lions home.

Beams finished the winner of the Marcus Ashcroft medal, his 10 possessions and a goal in the final quarter crucial, despite his kicking letting him down earlier in the game.

Brayden Fiorini was superb throughout for the Suns, and Alex Sexton’s four goals were crucial interventions.

The Lions did their best to monopolise possession early in the match, chipping the ball around in space with impunity. The silky Hugh McCluggage was influential in traffic, and Starcevich kicked his first goal in league football via a perfect pass by Tom Cutler. 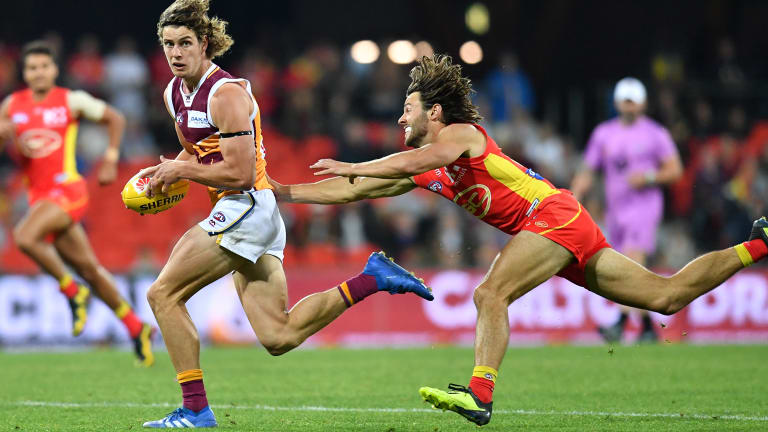 But the Lions suffered a blow late in the quarter, with Alex Witherden going off with a hamstring injury, and the Suns began to work into the contest, the opportunistic Alex Sexton kicking his first. His second and third came within a minute in the second quarter, cutting the lead to four points.

Enter Cam Rayner, who again showed his exquisite talent with a 60-metre running bomb. Rayner underlines the current differential between these two developing teams, but the Suns dug deep, Jack Bowes nailing a rare drop punt from the boundary line, Nick Holman keeping them within a kick with a set shot after the siren.

And the Lions were wasteful, Eric Hipwood and Daniel McStay missing six shots between them, most of them set shots. Predictably, the yips became a disease; when Daniel Rich missed another set shot from dead in front, the ball was swept away for Brayden Crossley to put the Suns in front. 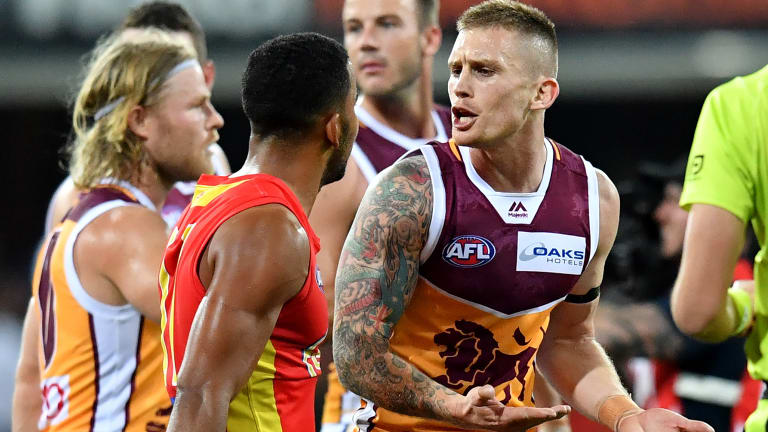 It became a comedy, or a farce: Taylor and Beams missed further set shots, and Sean Lemmens and Ben Ainsworth did the same for the Suns, failing to convert the Suns’ growing confidence on the scoreboard. It took Andrews – shifted forward – to break the spell.

Andrews had been his usual self in defence, marking or spoiling everything that came his way, and his perfect temperament for the occasion mattered. The Lions’ experienced players all came to the fore in the last quarter, leaving the benighted Suns without a win on their home ground for the season.