The Rabbitoh has expressed his desire to remain at Redfern after a breakout NRL season when he has established himself as one of the game's best finishers. 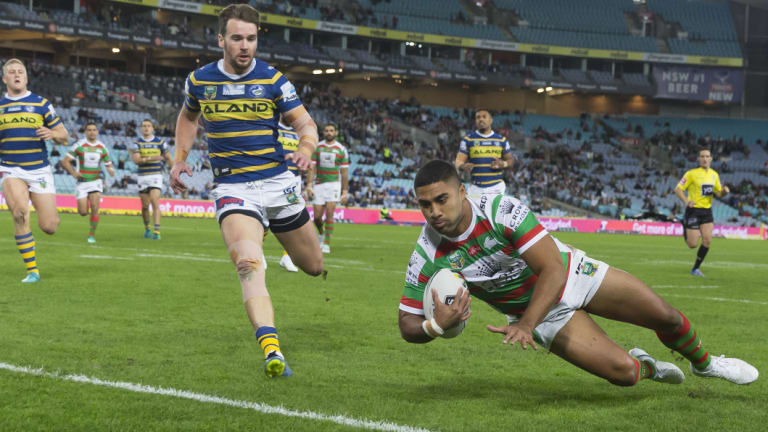 Machine: Robert Jennings (right) has been a regular try-scorer in 20018.

Heading into Saturday's grand final qualifier against the Sydney Roosters, the 22-year-old still has a chance to finish the year as the competition's highest try-scorer after racking up 19 four-pointers – four behind the Warriors' David Fusitu'a.

He has undoubtedly been the beneficiary of playing on the Rabbitohs' lethal left side – which has created more tries than any other edge combination in the competition (48).

The winger's stellar improvement is representative of the big gains the club has enjoyed under Anthony Seibold.

Wind back the clock to the first day of pre-season late last year and Jennings was on the end of a Seibold spray after showing up 12kg overweight.

He managed to earn a spot in the side for round one and shed the kilos during a gruelling summer to turn a corner in his career.

"I enjoyed the off-season a bit too much," Jennings said. "I was away overseas for a couple of weeks and I think I enjoyed myself a bit too much, I came back a bit overweight.

"I sat down with 'Seibs' and I wasn't in the shape I wanted to be in. It was very disappointing to let myself go like that.

Now Jennings is looking to lock down his future.

He and John Sutton remain the only members of the Souths starting side still off contract for next year.

Jennings has put aside negotiations to concentrate on his maiden finals campaign but expressed his desire to remain at the club.

"After footy finishes up, I'll look at it," Jennings said.

"But I love this club. They had belief in me the moment I started here and I want to stay here. Hopefully my future is here.

"I felt like my game has grown here, having seen the club and the culture behind it, seeing how it all works, it's definitely a club you want to be a part of."