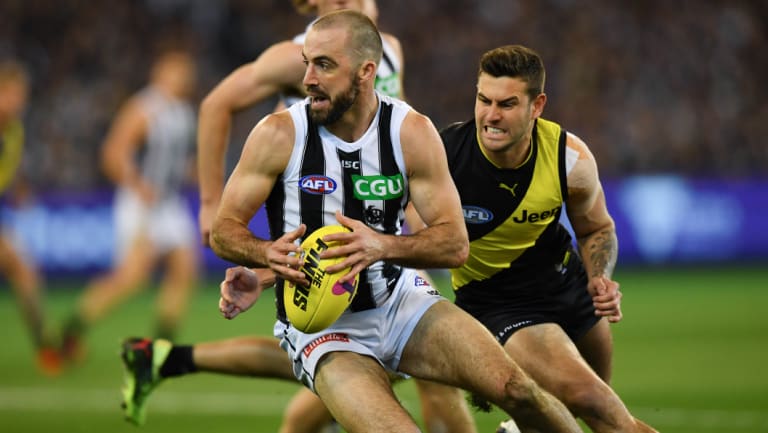 Steele Sidebottom had the ball on a string against Richmond.

Mark Maclure played alongside renowned finals performer Wayne ‘‘The Dominator’’’ Johnston and the great Bruce Doull in a treble of Carlton flags. But he has not seen a better finals player than Steele Sidebottom.

‘‘I think he’s as good as anyone I’ve seen going around,’’ said Maclure of Sidebottom’s finals prowess.

In the course of this September, Sidebottom has been close to Collingwood’s best player in all three games. On Friday night, he collected 41 disposals and carved up the Tigers, who didn’t see the need to put a hard tag on the elusive Steele.

Sidebottom’s finals record was formidable before this season’s heroics. He was in the running for the Norm Smith Medal in the 2010 grand final replay (which Scott Pendlebury took) as a second-year player and was superb in the 2011 grand final, when other teammates faltered.

Even in his first season, the 18-year-old Sidebottom was instrumental in turning the tide when the Magpies overcame a 28-point half-time deficit to beat the Crows by a kick. The official AFL records places him as Collingwood’s best player that warm evening, when he gathered 25 disposals and laid 10 tackles.

The Collingwood recruiters had chosen Sidebottom, as they did Dale Thomas, partly on the basis of what he had produced in TAC Cup finals. Sidebottom famously booted 10 goals in the 2008 grand final for the Murray Bushrangers, but the Magpies had noted, too, that he had been outstanding on the wing in the preceding final.

Sidebottom’s September places him in the company of past finals greats such as Luke Hodge, Johnston, Robert DiPierdomenico, Brent Crosswell and Kevin Bartlett; this is not to say that he’s close to the equal of Bartlett, an official AFL Legend, or Hodge, who is destined one day to join KB in AFL-sanctioned legendhood. 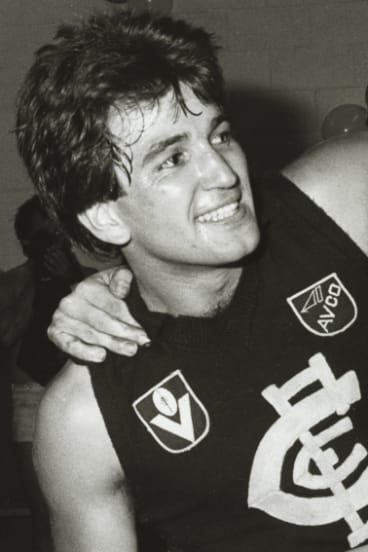 Made for the big stage: Wayne Johnston.

Wayne Carey, with the notable exception of the 1998 grand final – when he and his teammates didn’t kick straight – was a superb finals player for the Kangaroos. But it would be hard to say that Carey elevated his game. He was the best player in the competition, who merely maintained those standards in finals – a feat that is far harder for key position forwards than midfielders.

The same is true of Bartlett, who was as consistent a player as any in his era, albeit KB’s 1980 finals series – in which the wispy haired 33-year-old booted 21 goals in three matches and ran rings around Stan Magro (and others) in the grand final – was quite extraordinary. Leigh Matthews, who stands alongside Carey as the best to have played the game, was likewise a player who simply maintained lofty standards in September.

Sidebottom is more akin to the Dominator and Dipper in that he’s a notch below the absolute champions, but has been at his best in the games that matter most. In terms of week-to-week consistency, he would have both Dipper and Johnston covered.

Sidebottom doesn’t conform to our vision of a super finals player. He can win his own ball, but he’s most damaging outside the contest.

Whereas most of these September heroes were combative, physical players, Steele is one of those footballers with a ludicrous – and for the opposition fan – infuriating ability to find himself in space.

At quarter-time on Friday night, Maclure suggested on ABC that Sidebottom should have someone running with him. ‘‘Why doesn’t anyone pull him?’’ the former Carlton skipper asked yesterday.

It’s a fair question. The short answer is that the AFL has evolved into midfield v midfield, rather than midfielder v midfielder. Teams back ‘‘their system’’ against the opposition and to put a hard tag on the likes of Sidebottom can undermine that system. These days, almost every team speaks of ‘‘playing our game’’’ and not allowing the opposition to dictate.

Still, there are teams that have tagged Sidebottom, with varying levels of success. Collingwood’s grand final opponent, West Coast, have assigned Mark Hutchings to Sidebottom in their past two encounters. In the home-and-away game, Hutchings subdued Steele in what was a key to West Coast’s groundbreaking win over the Pies at the MCG.

The Pies were ready for the Hutchings tag in the qualifying final. They started Sidebottom at half-forward as a means of dealing with the expected tag and, as we know, he was the decisive influence in turning the match towards Collingwood before West Coast’s midfield took over the final 15 minutes.

Why does Sidebottom shine in spring? First of all, his hands are super clean – regardless of whether the ball is slippery.

Second, he has a massive aerobic running capacity, which enables him to find space and get to contests. Third, he has an extremely high footy IQ and is exceptional with the ball in his hands.
Fourth, like all top line players, he’s a competitor.

Temperamentally, he’s a relaxed country lad (from Congupna, near Shepparton) who gives Collingwood people the impression that little fazes him. One can only guess, but I suspect that the composure we see in finals is a reflection of his laid-back nature.

The challenge of West Coast on Saturday – and the probability that Adam Simpson and his coaching panel will have a Sidebottom management plan – increases the pressure on Sidebottom to maintain his stellar September standard.

Not that Steele would be worried.