Melbourne Storm prop Tim Glasby says his side is racing against time to regain their form just three games before the NRL Finals.

Two weeks ago the Storm’s hopes of back-to-back premierships looked on track as they rode high on an eight-game winning streak but a loss to South Sydney Rabbitohs and a 17-14 loss to Cronulla Sharks at AAMI Park on Sunday have raised fresh doubts.

The Storm’s ball-handling errors and communication between their play-makers robbed them of precious scoring opportunities on Sunday and those issues have been regular occurrences during losses.

The Storm only have a five-day turnaround before facing the Parramatta Eels at AAMI Park on Friday with the Eels coming off a season’s best 40-4 win over St George-Illawarra.

“It is frustrating and it seems to be something we keep coming back to through the year,” Glasby said.

“We had a patch there where we had good completion rates and our results reflected that. It’s not one thing that is going wrong, there is a couple of little areas and it’s not one person either as there are a few errors across the board that are creeping up.

“It’s not up to the Storm standard that I’ve come to know and one thing I know is what you go through during the season seems to come out during the finals so if we can’t fix our ball-handling up in the next few weeks we won’t be able to fix it up once the finals start. 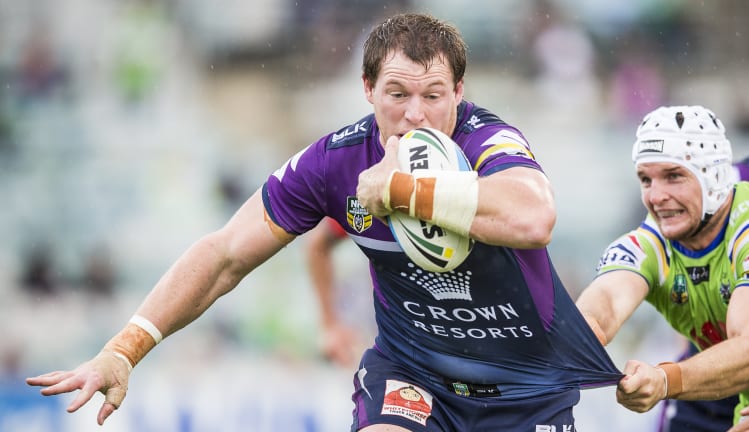 Glasby said the Storm are working hard to make up for a poor two weeks.

“We have to start fixing that up this week.”

“I suppose you could say that but I can’t say there is hunger lacking as I know there is a lot of effort going in,” Glasby said.

Storm captain Cameron Smith and Glasby both believe the team can fix their issues and return to being a serious premiership contender but time is slipping away.

“To win footy games you need the ball and to play against sides competing for top-four spots or part of the finals, you need to hold onto the footy especially,” Smith said after Sunday’s game.

“You look at the games where we have completed well, they have been easy for us. We are a good football side when we hold the ball.

“But until we get a full understanding of that and believe in it then I don’t think things are going to change.

“It’s a very short turnaround, five days until this next game so come Tuesday at our review we need to be very honest with ourselves on where we want to go in those last three matches.”

The Storm are yet to learn if veteran forward Ryan Hoffman will play again this season after injuring his hamstring late in Sunday’s game, the 34 year old second-rower will retire at season’s end and the club fears he has seriously injured his hamstring and may have played his last game.

“We will just be there for him and he has some real close mates in the team who he has played with for a very long time,” Glasby said.

The Storm host the Eels at AAMI Park on Friday at 7.50pm.