James Sutherland could leave Cricket Australia well ahead of his flagged departure date, as the sport's governing body closes in on its new chief executive.

It's understood the field of candidates to replace Sutherland was pruned from a list of more than 40 to a short list of six or seven at last month's CA board meeting. These include former Cricket NSW chairman John Warn, Australian Grand Prix Corporation chairman John Harnden, WACA chief Christina Matthews, who is a former player, and Sutherland's recently appointed second in command, Kevin Roberts, who has a strong commercial background.

Harden has previously been the South Australian Cricket Association chief and the boss of the ICC Cricket World Cup's organising committee.

The remaining candidates, also compiled through executive search agency Egon Zehnder, are impressive senior corporate figures who are not involved directly in cricket but have links through their employment.

Fairfax Media understands due diligence is being carried out on the candidates by Egon Zhender, with formal interviews with CA to soon begin.

CA is open to the new CEO being from outside cricket, pointing to the success former basketball administrator Malcolm Speed – Sutherland's predecessor – had in the role from 1997 until 2001. Speed went on to become the CEO of the International Cricket Council, a role that will again open up next year when Dave Richardson steps down.

It's unclear what Sutherland's intentions are when he leaves CA, but there is support for him to take on the ICC role, should he wish to split his time between the Dubai-based governing body and Melbourne. Sutherland would have family considerations to take into account but he has strong knowledge of the inner workings of the ICC. 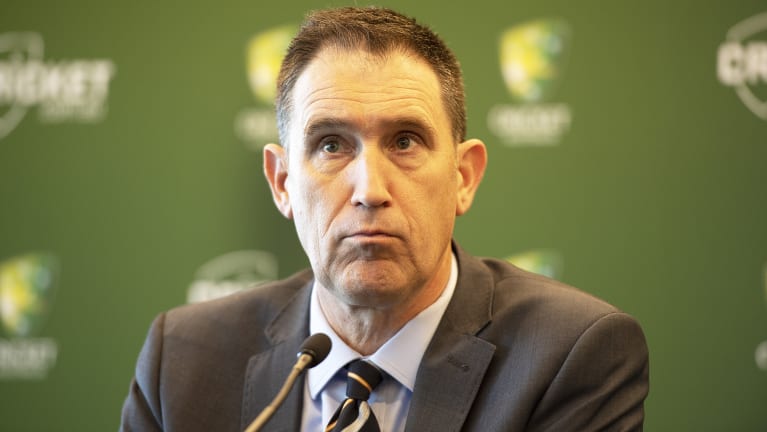 As part of his terms of employment, Sutherland had to give 12 months notice when he announced in June he was ceding the top role. But he and CA have agreed to an early departure, the date depending on the needs of his replacement. If, as expected, Sutherland leaves early, he will be paid out.

If an experienced cricket administrator takes the top job,  sources say Sutherland could leave as early as the start of the summer season, otherwise it's likely to be once the home campaign is completed.

Sutherland said in June: "It's my intention to give the board the opportunity to run a thorough process to identify my successor and for me to provide support to the new [chief executive] with the smoothest possible handover."

Despite his tenure being almost over, Sutherland will join Test captain Tim Paine, head of performance Pat Howard and coach Justin Langer on a sports leadership tour of the United States next week, including stops at the Dallas Cowboys and Chicago Cubs.

The hunt for a new CEO comes as CA prepares to receive a draft copy at next month's board meeting of a report into the culture at headquarters and among the broader game.

More than 80 interviews of those at various levels of the sport have been completed for the report instigated in wake of the ball-tampering scandal in South Africa.

There is a feeling among some who were interviewed that there was a disconnect between the administration and the team, leading to a win-at-all-costs mentality permeating among players before this escalated to an unfathomable level in the third Test against the Proteas in Cape Town in March.

This disconnect is seen by some as having exacerbated in wake of last year's spiteful fight over pay and conditions between CA and the Australian Cricketers Association. Relations between the ACA and Jolimont remain frosty, with neither side in a rush to broker peace.

The separate McCosker review into the culture of the team is also well advanced, with players said to have co-operated fully and aired any grievances they had.