Sydney Kings expect their superstars will win them plenty of games this season but their bench proved the heroes as they opened the NBL Blitz with a win on Thursday night. 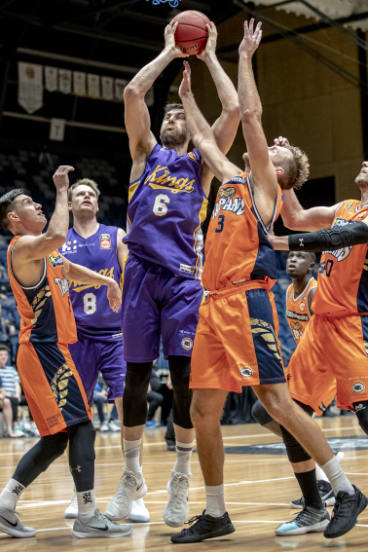 It was an uncharacteristically quiet game for Sydney Kings star Andrew Bogut.

Offensively the Kings couldn’t buy a basket but neither could Cairns Taipans, so the Kings inserted their bench midway through the third term and it turned the contest.

Kyle Adnam, Tom Wilson, Brian Bowen, Deng Deng and a combination of Dane Pineau and Deng Acouth at centre brought energy and dare to a rather staid contest as the Kings took a 57-48 lead at three-quarter time and then a 75-60 win.

Oklahoma City draft pick Devon Hall led the Taipans with 20 points and nine rebounds but the rest of his side struggled, shooting 31 per cent from the field.

“It’s going to be a bit of a blueprint for us for this year,” he said.

“We have a very good starting five but I think it’s important our bench unit comes in and keeps the ship going and we are going to be just as important in those lesser minutes.”

The NBL Blitz is always a time for teams to give minutes to their younger players and Kings coach Andrew Gaze opted to put his bench five in together as they spent a lot of time alongside each other at training.

Their energy will be vital as shown by the rebounding of Bowen (eight rebounds) and Deng (five rebounds) helped the Kings to a 55-43 edge on the rebound count.

“It’s early days in a lot of people’s camps but we are happy with the progress and we are starting to get more clarity in what we want to do night in, night out,” Adnam said.

“It’s huge anytime you have rebounds from your wing and guard spots and especially on the offensive end as extra possessions will get you right there at the end of finals time – it’s going to be big for us.”

The Kings haven’t ever won the NBL Blitz but with a win on day one are right in the running.

The Kings play Adelaide 36ers in Ballarat on Saturday at 3pm and then Brisbane Bullets at Ballarat on Sunday at 1pm.