Cairns have claimed the NBL bragging rights against their former captain in Brisbane, ousting Cameron Gliddon's Bullets 88-70 on Saturday night.

New Bullet Gliddon, who debuted for the Taipans in 2012 and captained them across the last four seasons, was dynamic with a career-high 29 points in Thursday's season-opening win in New Zealand. 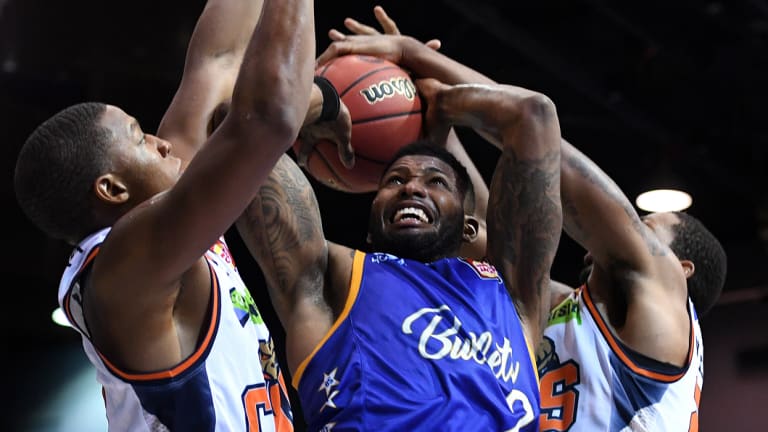 Alonzo Gee of the Bullets (centre) is blocked by Taipans defence during the round 1 NBL match between the Bullets and Cairns Taipans at the Brisbane Convention and Exhibition Centre on Saturday.Credit:AAP

But his former club spoiled their prospects of a perfect weekend, impressive import Melo Trimble starring with 32 points to give incoming Cairns coach Mike Kelly a win on debut.

The Taipans made just five of 24 three pointers but defended stoutly and found regular buckets close to the rim to lead, albeit narrowly, at every turn.

Cairns led by six at the final break, with a Nathan Jawai tip-in pushing the advantage to a game-high 10 points with just over five minutes to play before it blew out.

Guard DJ Newbill was another steadying influence for the visitors, finishing with 16 points and 10 rebounds.

"They kept grinding and it broke open," Kelly said.

"We didn't shoot the ball well and we're a good shooting team, I think.

"So if we continue to play defence and take the things we did well I think everyone is going to come to the party offensively. Hopefully we don't have to have one guy score 30 to get a win."

Nobody managed to do that for the Bullets, with Gliddon (11 points) threatening early but having no second-half impact while Reuben Te Rangi's 18 points off the bench were in vain.

"We shot well the other night, but against New Zealand we did a better job of getting threes off looks.

"Tonight we perhaps got enamoured with the three point line too easily."

The teams shot a combined one-of-14 from three point range in a stunted first quarter as the tight rims of the Brisbane Convention Centre offered little love.

Maryland-raised Trimble oozed class though; the 23-year-old scoring seven of the Snakes' 19 points in his first quarter of NBL.

New Zealand recruit Rob Lowe (14 points) then piped up as the visitors led by three, 40-37, after a whistle-heavy first half that yielded 22 personal fouls.

And once Trimble – who set a club record for the highest score on debut – found his range from distance it was curtains for the Bullets.