Taleena Simon says the Roosters are heading to the NRLW grand final. The winger was an unstoppable force in her team's 26-0 win over the Dragons, helping herself to four tries in a sizzling performance at Allianz Stadium.

The Roosters needed to win by two or more to earn the right to face the unbeaten Brisbane Broncos in the decider and did it with ease, with Simon etching her name into the history books with a quartet of four-pointers. 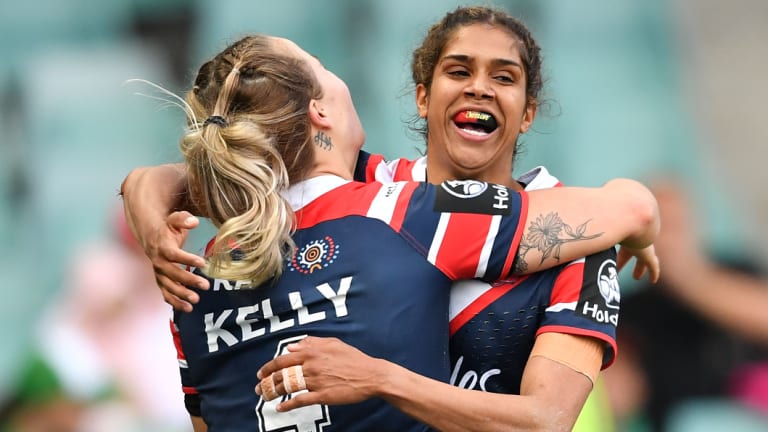 Speed blitz: Taleena Simon celebrates one of her four tries against the Red V.

St George Illawarra came into the clash with some momentum after hitting back hard last week with victory over the Warriors. The Roosters had lost to both Brisbane and New Zealand and were desperate to justify their pre-season favouritism.

They never looked like losing. They were the side that hit the ground with more energy, while the Dragons were guilty of some sluggish inside defence and a lack of urgency around the ball.

Simon was the one who cashed in. She crossed for her first try after just four minutes, adding another in the eighth, 11th and 33rd.

Debutant Brydie Parker and Victoria Latu made it six tries to none as the Tricolours steamrolled the Red V in the most emphatic fashion.

Simon caught fire early. She was over while the Dragons were still getting themselves into the game, then made it a double with a surge of speed and a big left-foot step to make it 8-0.

The lack of inside cover from the Dragons was symptomatic of their afternoon. It had been an issue after week one and had been a focus last week. But all the lessons they learned seemed to evaporate as the Roosters finally showed their class.

Honey Hireme, filling in at fullback, was caught out by a bad bounce and paid the price for a casual attempt to clean up the rolling kick. Simon pounced, then made it four tries just three minutes into the second half. 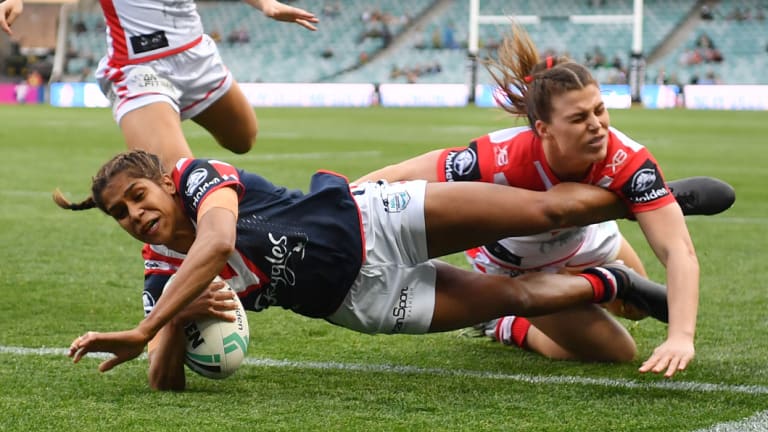 Unstoppable: Taleena Simon pounces once again for the Roosters at Allianz Stadium.

Parker and Latu completed the rout, while the Dragons would have left hugely disappointed after seemingly finding their groove last weekend.

Halfback Zahara Temara was influential, guiding her team around the park in commanding style after being given her chance as a key playmaker.

Now they must find a way to continue that form against the Broncos, who have been the dominant force over the first stanza of the new competition.

On paper, the Roosters have the ability and are stacked with representative players. This was the kind of performance that will put them right on the map against Brisbane as they approach the inaugural NRLW grand final next Sunday.