Canberra Raiders second-rower Joe Tapine is hopeful of playing in New Zealand's end-of-season Tests after he underwent surgery on his broken thumb on Tuesday.

Tapine's form has been excellent towards the end of the NRL season, highlighted by his two-try effort in the 22-20 loss to the Wests Tigers two weeks ago.

He'll miss not only the Raiders' clash against South Sydney at Canberra Stadium on Saturday, but the rest of the season as well. 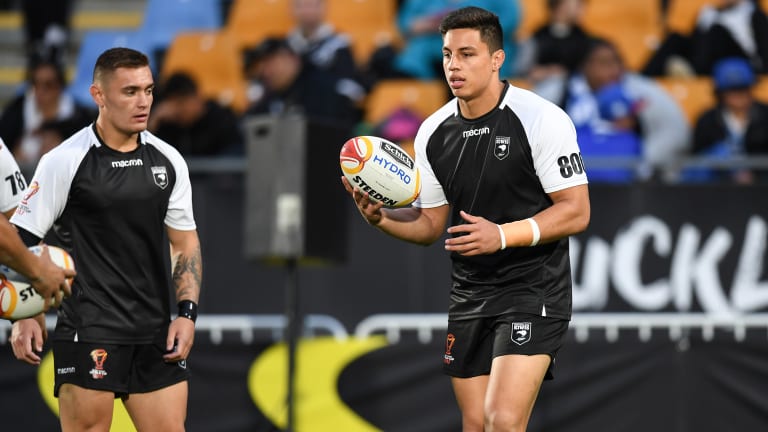 Raiders second-rower Joe Tapine is hopeful of being fit for the Kiwis’ end-of-season Tests.

The 24-year-old could be back in time for the Kiwis' five Tests in October and November, starting with Australia in Auckland on October 13 before they head to Europe.

He has a check up in two weeks when he'll get a better idea of when he'll be back.

His main concern over the next few weeks will be to watch what he eats to ensure he doesn't put on any weight during his lay off.

Then Tapine's sights will be set on getting fit for the Kiwis.

"I'm hopeful, but it's going to be hard and I've still got to get picked for that," Tapine said.

"There's a lot of players playing now and in finals that will deserve a spot. I'm still hopeful to get back in time and get a spot in the team.

"I knew in the last week we weren't going to make finals so I had to play hard to try and make that team, and it was just unfortunate that I broke my thumb."

It's the third time Tapine has injured his hands in the past two seasons.

He dislocated his thumb in the round-one clash against Gold Coast at the start of this season, and also fractured a finger against North Queensland in last year's season opener.

Tapine put it down to bad luck.

This injury came in the opening five minutes of the Raiders' 14-12 victory over the Sydney Roosters on the weekend.

He got it strapped and played on, a gutsy effort given vision of the Green Machine's team song in the sheds after the win showed just how sore it was – Tapine unable to clap due to the pain.

"I think it was in the first five minutes. I went in for a tackle and I hurt it, and I let the physios know and just wanted to get it strapped," he said.

"At half-time we thought it might be a ligament. Went and got the scans the next day and it was broken.

"It's a bit frustrating. I wanted to play the rest of the year. I've had a bit of bad luck with my fingers this year and last year.

"I had surgery on Tuesday morning, they fixed it up and put a pin through it. That'll be in there for a couple of weeks and I'll get that removed down the track."

Tapine was confident in the Raiders' second-row stocks covering his absence over the final two rounds, with Canberra off to Auckland to play the New Zealand Warriors to end the season.

Both Soliola and Whitehead have been filling holes all over the place at the back end of the season, helping cover a string of injuries and suspensions in the backs.

Both played in the centres against the Roosters, while Whitehead also spent time at five-eighth when fullback Brad Abbey went off for a concussion test.

"They're both great players, both played international back row so nothing to worry about there. They've both got plenty of experience so we'll be fine," Tapine said.