Wallabies flanker David Pocock has again shown why he is the class act of international rugby.

Rather than chasing play, Pocock went to the aid of All Black Ryan Crotty immediately after the centre was floored by a hit to the head by his teammate Jack Goodhue early in the Bledisloe Cup opener. 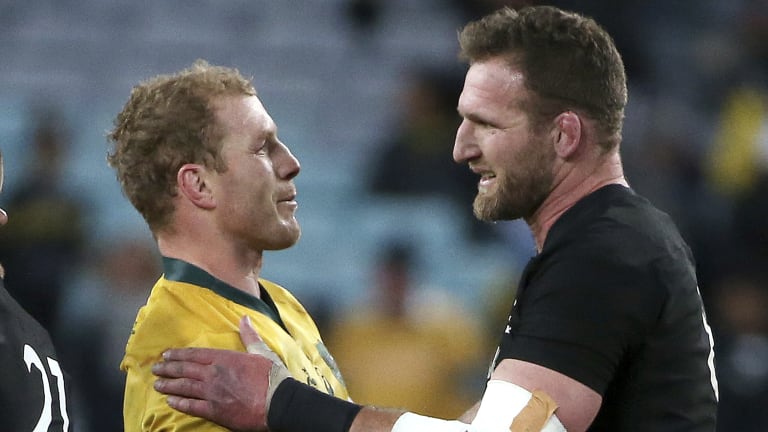 As play continued at ANZ Stadium in Sydney on Saturday night, the Australian No.8's priority was to check on the wellbeing of Crotty who was felled by friendly fire as the two New Zealand midfielders went in for a tackle.

It was Crotty's sixth concussion in the last 18 months and worries swirl around his future.

Pocock's unselfish actions earned high praise from All Blacks flanker Sam Cane, a player who has also had his share of concussion issues.

"It speaks pretty highly of his character and the type of guy he is if he's willing to put the battle to one side in that moment and put the player's welfare first," Cane said.  "So, thank you David."

Pocock, on the comeback trial to international rugby, has made stances over human rights, environmental and animal welfare issues and is acknowledged as one of the nicest guys in the game – as one of the most competitive in his combative back row position. 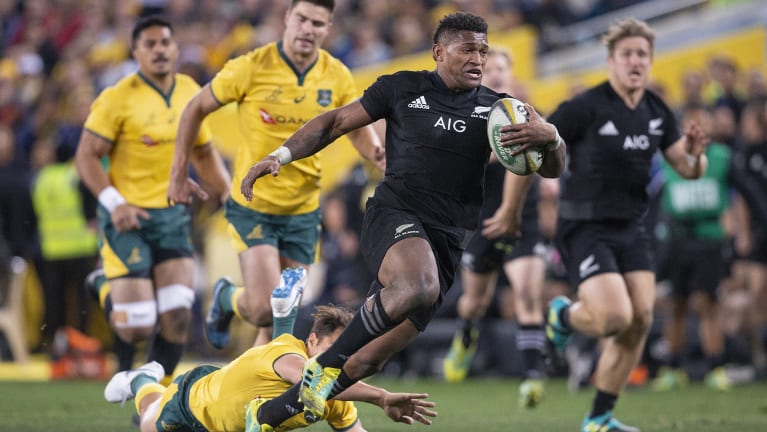 Waisake Naholo heads to the try line during the All Blacks’s win over the Wallabies.

Crotty has been ruled out of the rematch with the Wallabies in Auckland on Saturday night though medical checks after the match suggest he will be OK for involvement in the Rugby Championship further down the line.

"It concerns us, definitely," All Blacks coach Steve Hansen said of Crotty's ongoing issues. "He's already seen a specialist and they've given him the all-clear. From our understanding as long as you fully recover and don't go back when you're not fully recovered, then you're OK.

Cane was also worried for his teammate after the 38-13 win.

"It's not nice to see," Cane said of Crotty lying prone on the field and then being assisted off in a groggy state. 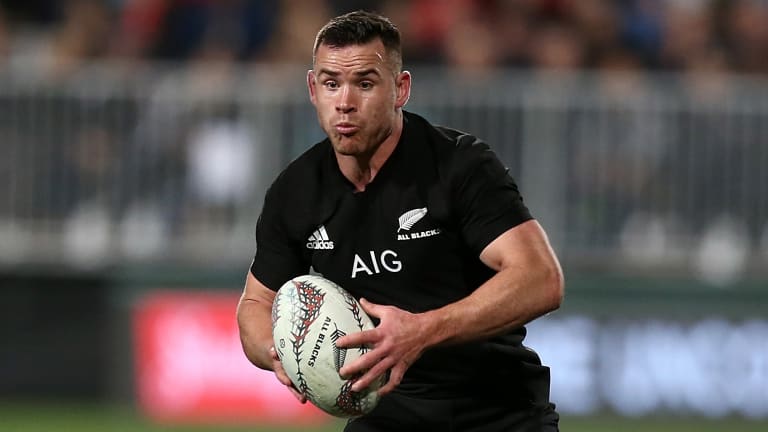 Worries swirl around Ryan Crotty’s future after his sixth concussion in the last 18 months.

"It's just a tough injury. Everything else has a time frame but there's just so much unknown with head knocks and it seems like you can be only one away, if it's the wrong one, from it being then end of it.

"I've seen that with a few mates. It certainly helps you appreciate every week and every game you have and realising how fickle it can be."

Other acts of sportsmanship in rugby

1. Tana Umaga and Colin Charvis: Umaga, the All Blacks midfielder won the Pierre de Coubertin Trophy for international fair play for his compassionate deed in a 2003 test against Wales in Hamilton. Umaga's teammate Jerry Collins stopped Welsh No.8 Charvis in his tracks with a thunderous, but fair hit.

The All Blacks surged onto attack, but Umaga stopped to tend to the stricken Charvis, removing his mouthguard so he did not choke. 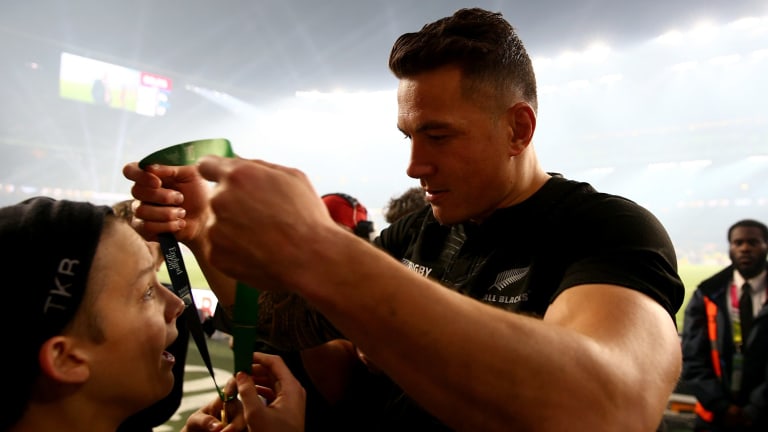 2. Sonny Bill Williams and Charlie Lines: Williams earned an International Fair Play award for giving away his Rugby World Cup winner's medal to the young fan Lines, who had been flattened in a tackle by an over-zealous Twickenham security guard after the All Blacks beat Australia in the 2015 final.

Lines ran up to give Williams a hug. The All Black was incensed at seeing the boy "smoked" by the security guard. Williams took his winner's medal from around his neck and presented it to a delighted Lines.

His death inspired a rash of tributes from throughout the rugby world. One of the more poignant was a special haka by the New Zealand Maori team before their game against Munster in Limerick a month after Foley's death. Maori captain Ash Dixon laid a black jersey – with Foley's initials on the back – on the turf before leading his team in a rousing haka.

4. Ian MacRae and Danny Hearn: England Test midfielder Hearn was paralysed for life after suffering severe neck injuries in an attempted crash tackle on MacRae in the All Blacks game against Midlands-London-Home Counties in 1967.

MacRae was instantly concerned for his rival. "I knew straight away something was badly wrong with him," he said, "He looked up and said 'don't move me'." The pair have maintained their friendship for almost 50 years.

5. Nathan Hughes and Sam Simmonds: Exeter Chiefs No.8 Simmonds was sent reeling when Wasps' Hughes crashed into him after taking a tap penalty in the 2017 English premiership final. Hughes stopped immediately to check on his England squad colleague and placed him in the recovery position.

Both coaches praised the burly back-rower's kindness with Exeter boss Rob Baxter hailing it as "an absolutely fabulous reaction".

6. Tala Gray and Virgile Bruni: Australian back-rower Gray took decisive action to protect a rival in a French Top 14 match in December 2017. Gray – now with Stade Francais – was playing for Lyon when Toulouse No.8 Bruni became stuck in a ruck, unable to move an injured knee.

The quick-thinking Gray dropped to his knees and spread his body over Bruni to shield him from further danger from falling players.