Home » Sport » The AFL’s run home: Where could your team land?

With two rounds to go, the top eight is still up in the air, with 11 sides in the hunt. Here's the guide to each team's chances.

The Tigers have locked up a top-two spot and because of their percentage break on West Coast they effectively need just one more win to secure top spot.

The Eagles will likely finish second. If Richmond lost both their games, West Coast could still finish first, while if the Eagles lose both games they could be overtaken by Hawthorn and Collingwood.

The Hawks could finish as high as second if the Eagles lose both their games. Regardless, two wins should get the Hawks into the top four unless they are overtaken on percentage by Collingwood. One win could still be enough for a top four spot if other results go their way. The Hawks could conceivably still miss the top eight if they lose both their games, but that would require a host of other results going against them. 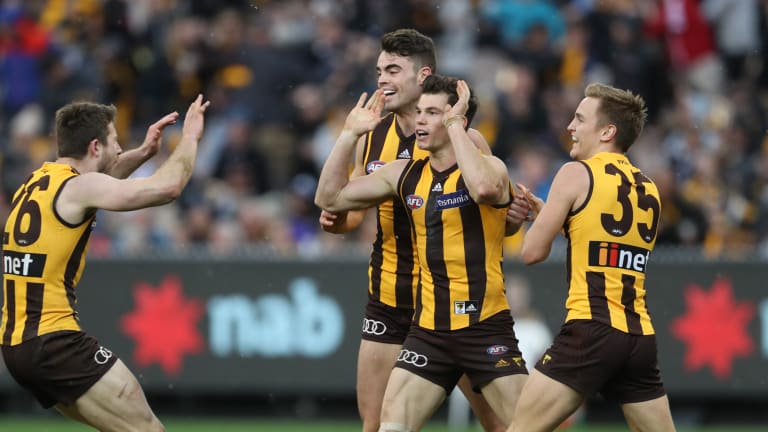 The Hawks have snuck into a top four spot with two rounds to go.

The Magpies are in a similar spot to the Hawks, albeit with a slightly worse percentage. Two wins could get them as high as second, but Collingwood could still miss the top four even if they win both of their games. One win could be enough for a top four position, but it’s unlikely. The Magpies could miss the eight if they lose both of their games.

The Swans could mathematically finish as high as second but that would take a huge percentage swing, so it’s highly unlikely. Two wins would in any case get Sydney into the top four. They could also make the top four with one win but that is unlikely. Two losses would leave the Swans vulnerable to missing the finals on percentage.

Two wins and Melbourne could conceivably make the top four, especially given their strong percentage. One win will all but ensure they make the finals given their huge percentage break, unless Geelong somehow made up the gap with massive wins. Two losses and the Demons could miss the eight, but could still make it, most likely at the expense of Port Adelaide. 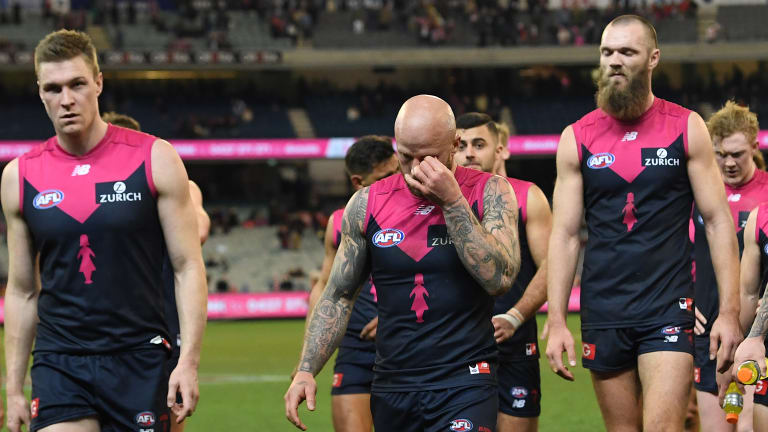 The dejected Dees walk off the MCG on Sunday. They’re , incredibly, a chance to miss the finals again.

Two wins and Port could still finish in the top four. One win might be enough for the Power to still make the eight, given Melbourne’s tough run home. Two losses would leave them very vulnerable given Geelong’s soft run.

The Cats are still favoured to make the top eight given their extremely soft remaining games, although they could still miss the eight even with two wins if Port win both their games and Melbourne, Sydney, Collingwood and Hawthorn all win at least one. The Cats could make it with one win if Port lose both their games and North Melbourne can’t win both of their remaining matches.

The Kangaroos are up against it. Two wins would give them a chance, but they’d probably need two of Sydney, Melbourne, Port and Geelong to falter. One win almost certainly won’t be enough.

The Bombers’ chances are remote. They’ll almost certainly need to win both of their games and even then will need teams above them to stumble.