Greg Inglis is reminded of it every time he walks through the door.

There it is, hanging on the wall: a photo of him with the Provan-Summons trophy after Souths had won the 2014 premiership against Canterbury. 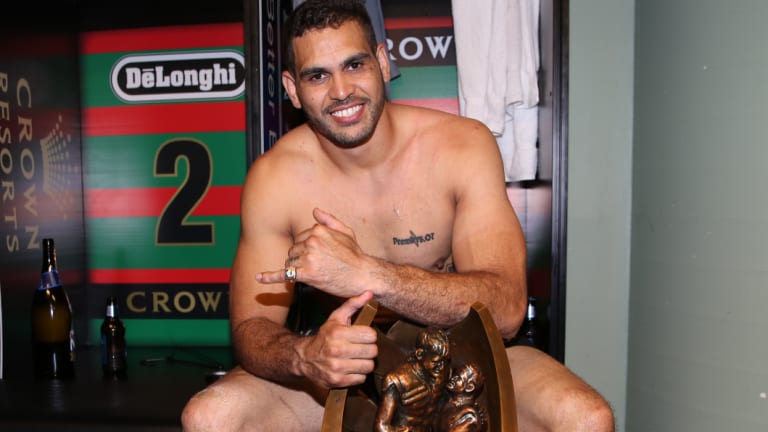 Driving force: Greg Inglis with the premiership trophy in 2014.

“I’ve got a copy in black and white and in colour,” the Souths superstar said at Monday’s captain’s call launching the start of the NRL finals series. "I remember it from 2014; me just holding the trophy. What was going through my head then was what was stripped away from me in 2007 and 2009.”

He’s referring to the grand finals he won while playing for Melbourne before the salary cap scandal that later engulfed the club saw them stripped of those titles.

“That 10 to 20 seconds with the trophy was a reflection on 2007 and 2009 when they were taken out of the record books,” he continued. “The photo just reminds me to cherish that moment because you don’t know when it’s going to be the last time to hold that trophy. Or if you’ll ever get the chance again.”

Souths and Inglis certainly have the chance to do it again. It starts, fittingly, against his former side in Friday night’s qualifying final at AAMI Park.

Few predicted the Rabbitohs to play this well in their first season under new coach Anthony Seibold.

As for Inglis, he had serious doubts about playing this season at all. He considered walking away from the game as he battled depression following an ACL knee injury that cruelled his 2017 campaign.

Asked by one reporter how difficult it was mentally to come back from that setback, Inglis snapped back: “Well, if you were around, you’d know I was in a mental institution. Being mentally ill is tough. I’m back to where I want to be now. There were times in November, December last year that I thought about hanging up the boots. You know you should give up when you watch the boys training and feel nothing. But getting back from my ACL, and missing finals footy the last two years, is driving me. I want to lead this team the best way that I can lead.”

That has always been through his actions. A broken thumb, suffered against the Cowboys and then required surgery, sidelined him for six weeks. The layoff was a blessing: he’s returned looking sharper than ever.

He understands, though, that he’s no longer just inspiring his teammates.

“It’s so touching, the people who reach out to me,” he said about the reaction to him talking publicly about his mental illness. “It does make me proud when that happens. Me coming out and helping myself, I didn’t realise I would help someone else; their sister or cousin or loved one.”