Home » Sport » The questions the Demons need to answer

This is the alternative ladder to chill the heart of Melbourne fans, or gladden them depending on how full you see your glass. 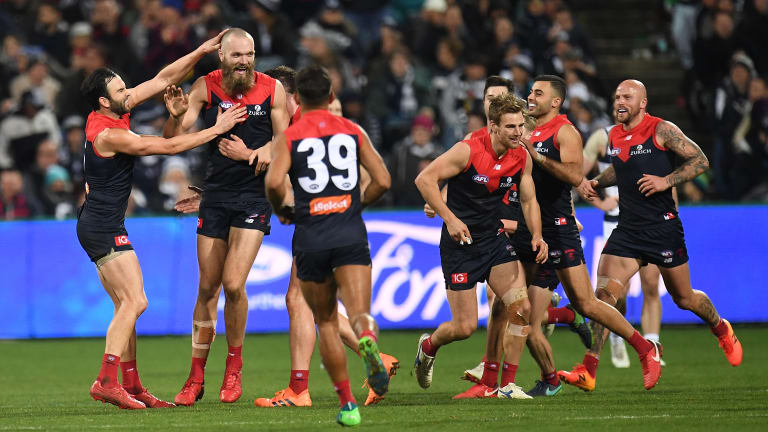 Max Gawn celebrates a goal against the Cats, which they lost in a nailbiter.

The answer? Melbourne would be two games clear on top of the ladder. Decisively the best team in it, two games clear of Richmond on top. (Oddly enough, St Kilda also go to the bottom below Carlton).

I know it’s all a bit silly and academic, but work with me here, because that alternative ladder also explains something of Melbourne: the Demons are very close to being a very good team, just a couple of goals here and there.

But there is another statistic that is a little more deflating. Melbourne, as you will be well aware by now, haven’t beaten a top eight side. But it is worse than that.

Against teams outside the eight this year Melbourne have a percentage of 160.8.

Against teams in the top eight they have a percentage of 66.

That is a crazily big gulf and feeds the idea of the team as flat-track bullies. They have been labelled that and while these numbers point in that direction, in truth, it's not really very fair.

The two Geelong games were each decided by just one kick so the wild disparity in top eight, bottom nine percentage comes down to two blowout losses against Hawthorn and Richmond and a biggish loss to Collingwood.

The two after-the-siren Geelong losses, or more to the point the second one, points most of all to this problem of the Demons' defending.

That second loss was perhaps the most emblematic of Melbourne. They led by 23 points at three-quarter-time, kicked three goals in the last quarter (admittedly 3.5) and still lost because they could not stop Geelong kicking eight goals (and to be fair, Geelong did kick eight straight so they were bloody unlucky with Geelong’s accuracy).

But it feeds the picture of Melbourne. The Demons rank No.1 in the competition for contested possession and they have scored more points than any other team. Teams that are so highly ranked for those two measures are normally in the top four.

The problem is not that Melbourne win the ball nor that they can score, it is the inability to stop the ball going the other way.

Melbourne cannot hold the good teams up. They win the ball against teams good and bad but the good teams get them on the outside. The good teams close down the space on the player with the ball, slow Melbourne up and try to force the turnover. When they have possession of the ball they then play keepings off and chip-kick the ball around.

In games they win, Melbourne is the top-ranked team for playing on from a mark. In games they lose, they drop to 11th.

The uncontested possession numbers tell a bigger story of Melbourne than the contested ones.

When Melbourne lose, they concede more uncontested marks than any other team. The opposition hold the ball and punch holes through them going forward.

Football numbers can be as banal and meaningless as AFLX but these numbers point to a pattern in their games that is evident to the naked eye. There is always the sense of an opposition being “in” a Melbourne game even when the lead stretches because they have a proven ability to allow a side to get a run on against them.

Melbourne does a lot right and it is why they have also – as Simon Goodwin rightly pointed out in his press conference on Thursday – been within a kick in 17 of their last 20 games, but it is their defensive game that is hurting them.

“Everything they do is about winning the contest which is a good basis to play footy but the good teams take the approach that you can’t win every contested ball so set up outside the contest for the worst case scenario,” a coach said of the Demons' play.

“The good teams are also better at defending even numbers behind the ball.

“A little bit also has to do with personnel. They play [Angus] Brayshaw and [Dom] Tyson on their wings and they struggle to run like other wingers. Once the oppo gets the ball on the outside they can’t close down space.”

Naturally, personnel is also significant when discussing their ability to defend as they had lost Jake Lever for the season. The highly rated intercept-marking attacking defender was brought in for precisely this role: to staunch the bleeding.

On Sunday they play West Coast, a team almost polar opposite in approach to Melbourne. They prefer numbers on the outside and run and move the ball.

“There are issues with Melbourne’s team defence. They don’t defend as urgently as they attack,” another coach said.

“Geelong, early in the year in particular, moved the ball so slowly that they had time to be set up so well defensively behind the ball that they were hard to score against even when you won it. Very rarely when Geelong got up early in a game and they could control the speed would they lose.

“What is strange about the idea of extra numbers at the stoppage is they have a dominant tap ruckman in Max Gawn – their scores from centre clearances when numbers are even in the square are off the charts [they rank top in the AFL with 15 points a game on average] – so the question is why add numbers to the contest?

“I think the question is how do they stop teams with slow play? How do they defend?”

That is the question West Coast will be asking and for September's sake, Melbourne need to show on Sunday that they have the answers.