A moment of magic from Johnathan Thurston in his last NRL derby set up Coen Hess to give North Queensland victory on Thursday night and put Brisbane's finals plans in jeopardy.

North Queensland were down with three minutes on the clock, before Thurston's kick sat up awkwardly for Sam Thaiday and into the gleeful arms of Hess to give the hosts a 34-30 victory at 1300Smiles Stadium. 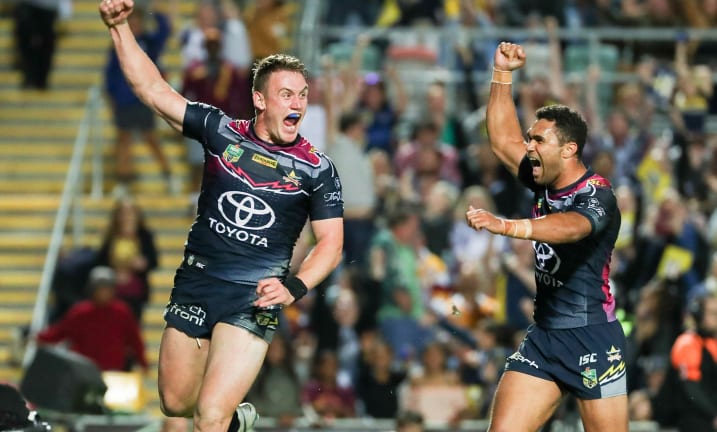 The loss for Brisbane means the Wests Tigers can move to within two points of the Broncos if they beat Canberra on Sunday.

In a match where momentum swung wildy, the Cowboys dominated the early stages as tries from Gideon Gela-Mosby and Jason Taumalolo gave them a 12-point lead midway through the first half.

The next four tries all came to the visitors with James Roberts, Matt Lodge, Korbin Sims and Tevita Pangai Junior all getting on the board before Kyle Feldt, Gavin Cooper and Hess scored for the home side.

Te Maire Martin angled a superb kick for Gela-Mosby to down the ball for a try and after Darius Boyd lost the ball in a tackle, and Taumalolo outran Milford for a second.

Roberts turned the game by collecting an intercept pass from Martin and racing just under 90 metres to half the deficit.

In a mixed night for Thurston, a cross-field kick in his own half led to a knock on from Gela-Mosby and from the next set Matt Lodge scored for the Broncos.

It was an eight-point try for Martin's contact with Lodge's head as he was grounding the ball.

A 55m penalty from Kyle Feldt on the stroke of half-time gave the Cowboys an 18-16 half time lead, but Sims surged over from close range and then Pangai Junior burst through the line 20m out to seemingly secure Brisbane victory.

The Cowboys had other ideas, though, and Feldt dived over in the corner and then Matt Scott set up Gavin Cooper to power over the line before yet another late intervention from Thurston in a Queensland derby saw his side triumph.