Reigning premiership coach Damien Hardwick has thrown out the challenge to Richmond’s flag foes, declaring his Tigers “can be beaten” in September.

Hardwick’s team has looked in ominous form since its grand final demolition of Adelaide last year and will be looking for its 22nd consecutive win on the MCG when they face Hawthorn next Thursday in a qualifying final.

But Hardwick is refusing to get caught up in any chatter concerning invincibility.

“We certainly can be beaten, we acknowledge that and we accept that,” Hardwick said on Wednesday. 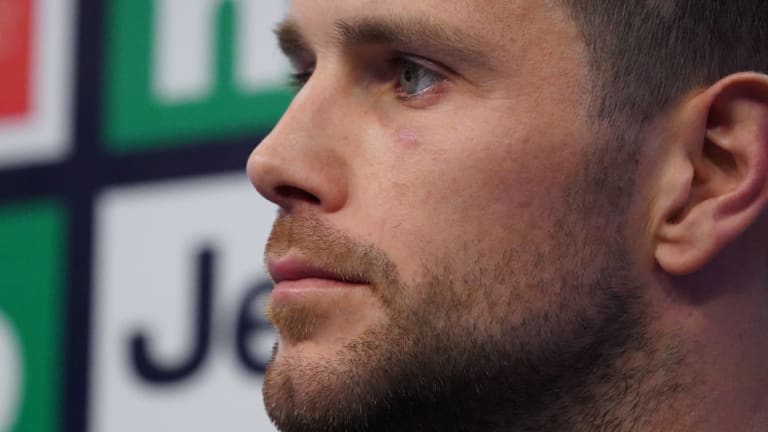 Trent Cotchin at a media conference on Wednesday.

“If we don’t come to play, like any other side in the competition, we’ll get beaten.

“The competition is very even one through 18 but now there’s only eight sides left … any side on its given day, provided they play their best footy, is capable of beating anyone else.

“We’ve never said we’re unbeatable … everyone is … and we’re one of those sides that are.”

Despite admitting to playing below their best in last week's narrow win over the Western Bulldogs, Hardwick's confident that his side can go to another level.

"There's a lot of growth in our side coming,'' he said. ''We've been doing a bit of work today, we'll do a bit tomorrow and we'll start to get what we know is our best footy and start to play that."

Injured duo Dan Butler and Kane Lambert will train on Thursday, as they face a race against time to be fit for the qualifying final.

Hardwick admits there’s an element of risk about bringing underdone players into the game, particularly Butler, who hasn’t played since the round-16 clash with the Crows.

“We’re very confident both those boys will be available to play, selection wise once again we’ve got some decisions to make about what that side looks like for us going forward.”

One man who will definitely be out there is Hardwick’s captain Trent Cotchin, although the skipper has had light training  loads in recent weeks due to soreness.

He missed the round-22 win over Essendon and played only 74 per cent of the game against the Western Bulldogs, but Cotchin laughed off questions about his body.

“I think that's the coach looking after me for not getting as many kicks as I should," he said.

"I missed two weeks prior and my game time wasn't high, but I don't typically play a heap of game time compared to the key backs and so forth.

"It's just another opportunity to play with a team I love against a team that I don't love, and that's as simple as it is for me.

"I think everyone is a little bit sore. It's a long season and that's the benefit of having a bye leading into the finals, you get an extra week to make sure that your body is as good as it possibly can be.” 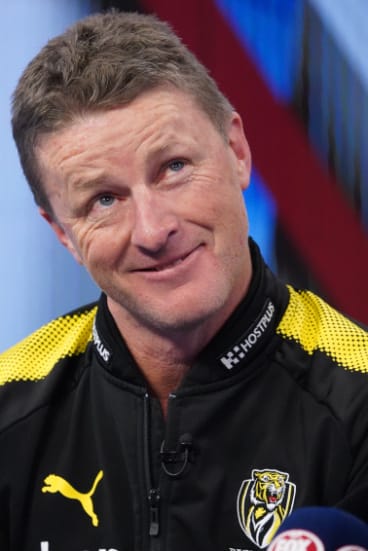 For Hardwick and Cotchin, they’ve been here and done that and appear relaxed as they approach their premiership defence.

But one thing that will be new is their first opponent, with Richmond and Hawthorn having not  played in a final.

And thus it will also the first contest between Alastair Clarkson and Hardwick – master and apprentice – in September.

“Yeah, it is interesting. We’re friends and our family are close friends. But the reality is, if you want to win it then you’ve got to go through everyone,” Hardwick said with a smile.

“It’s a really exciting challenge for us. They’re a great side. They’ve got a really good complement of experience and youth.”