In one sense, Dayne Beams has not officially asked his club for a move to Collingwood this trade period.

In another sense, he had already done so when he told Brisbane late in the year he would return to Victoria at the end of his contract in two seasons’ time.  If a move could be done sooner, he would be keen for the club to do it. 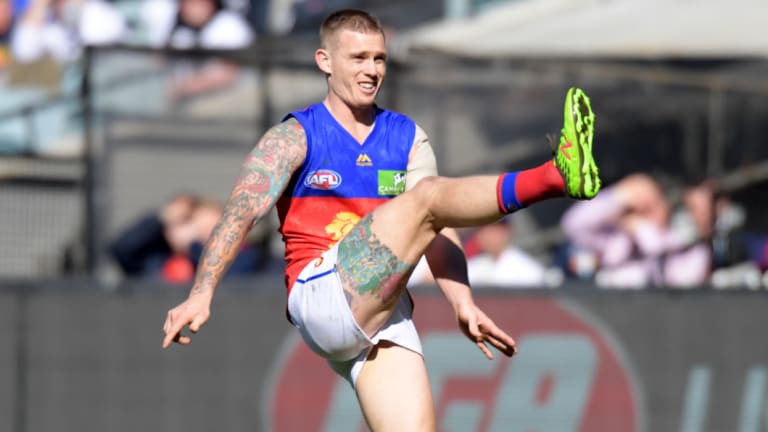 Trading places: Dayne Beams is keen to get back to Collingwood.Credit:AAP

Talks are expected between Brisbane and Collingwood in coming days and the idea of a trade is understood to have moved from speculative to possible.

After Tom Langdon recommitted to Collingwood for a further three years after turning down offers of five to six years from Fremantle and four to five years from Sydney, the options for Beams' trade are narrower. Any move will require a creative arrangement and would appear to most likely need to involve future picks.

Meanwhile Port has rejected Hawthorn’s offer of pick 15 and Ryan Burton in exchange for Chad Wingard.

The Power want more than Hawthorn’s first pick and Burton and have not yet done a medical on him. Until they do a medical and reassure themselves about concerns about Burton’s knees they are not convinced about the former first round draft pick being involved in any trade arrangement for Wingard.

There was no substantial movement on Tim Kelly’s push to be traded to West Coast at the weekend. That deal still looks difficult but would be expected to be done by Wednesday night’s trade period deadline.

Fremantle’s hard line on trade terms on Friday for Melbourne forward Jesse Hogan, insisting that pick 11 and a future second round was too much, meant talks with the Demons went quiet over the weekend. Presently Hogan and thus Steven May – who would be sought by Melbourne if they can use what they get for Hogan to pass on to Gold Coast – are having to re-think where they will be next year.

As things stand the pair will remain at their clubs unless either Fremantle has a shift in position or a creative way of contriving a deal to satisfy all parties can be conjured. Melbourne’s priority is that if they agree to Hogan going it must be on the basis they can find an arrangement to suit Gold Coast to trade May.

The Dockers still hold that they won’t trade Lachie Neale to Brisbane for pick 5, and even if they did so, pick five would be too much in a trade for Hogan.

Dylan Shiel’s move to Essendon has struck an impasse with the Giants pushing for two first round draft picks for him. Essendon won’t part with that much and it would appear logical that pick 9 and a future second round pick will be the basis of a deal but that is still to play out.

Theoretically – with Tom Scully likely to move to Hawthorn on a four year deal (absorbing the three years he has left to run on his contract and smoothing the financial terms) for a probable third round pick, Rory Lobb poised to be traded to Fremantle, Will Setterfield already having moved to Carlton and possibly Jeremy Finlayson also moving somewhere – the Giants could keep Shiel and stay under the cap. But after giving Shiel permission to discuss trades with Victorian clubs – or encouraging him to talk to the clubs depending on which version you believe – it is hard to then envisage a trade not being done.

Collingwood will secure Jordan Roughead for a late draft pick from the Bulldogs to be a back up ruck and key defence support.

Roughead might have moved as a free agent had the deal been done sooner, but a move under free agency could also have meant the club did not get the third round compensation pick they received for losing Alex Fasolo as a free agent to Carlton.

Port has some minor interest in Brisbane defender Sam Mayes, a former first round draft pick.

Aaron Hall’s move to North Melbourne and Jack Scrimshaw’s move to Hawthorn will both happen before the deadline. So too should Kade Kolodjashnij get to Melbourne in a trade.

George Horlin-Smith will be traded late in the piece once Gold Coast is sure of what later picks they have to be able to trade to Geelong.