Home » Sport » Tupou playing for love of 'little one'

RIL. Those three sad letters will again be emblazoned across Atu Tupou's head band. Once again he'll play in his nephew's honour.

If the Tuggeranong Bushranger scores a try against the Woden Valley Rams in the Canberra Raiders Cup grand final at Seiffert Oval on Sunday, he'll point to the sky to the "little one" resting in love.

The death of his nephew hit Tupou hard, especially when he found out his brother Taniela and partner Katareena were going to name their son after him. 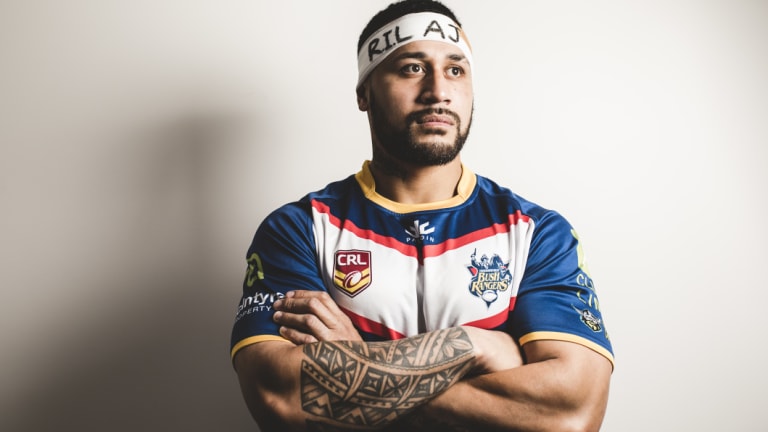 Tuggeranong second-rower Atu Tupou will play in honour of his nephew.

"They ended up losing their baby giving birth, he didn't survive the birth," Tupou said.

"It hit me, I was speechless when they told me that they were going to name him after me. I broke down that whole night."

When he heard the sad news, Tupou returned to New Zealand to be with his family.

Football was the furthest thing from his mind in the week leading up to the Bushrangers' preliminary final against the West Belconnen Warriors.

He wasn't due to return until the day after the game, but because of the support Tuggeranong showed him in his family's hour of need Tupou changed his mind.

"They pretty much made family the first priority. They offered to pay for my flights and everything back home, and anything I needed to help the family out they were going to provide for me," he said.

"Even for the semi-final game knowing it was a do-or-die game, they weren't too focused on that, they were focused on trying to put me in a good place so I could be with my family."

The 26-year-old was a man possessed in the 22-0 victory, scoring a try in his man-of-the-match performance.

It's something the second rower hopes to repeat in the biggest game of the season as the Bushrangers look to win their first ever premiership.

"I'll be wearing the headband again this week. I'll be dedicating the final game to the little one," Tupou said.

"I hope [to score again]. It will give me another opportunity to point to the sky and dedicate it to my nephew.

"I've only just found out that the club has never won a grand final, so it will be even better to make history for the Tuggeranong Bushrangers, and be that team to make history."

Tupou came up through the New Zealand Warriors junior system before he came to Canberra to play for Tuggeranong for the 2016 season.

The Bushrangers have strong links to the rugby league community in Auckland and bring a group of Kiwis out every year to live with a host family in Calwell.

If it was up to Tupou though, he'd probably be back living in Auckland.

But his wife fell in love with Canberra and it's now his young family's home.

"I've been in Canberra about three years now. I arrived in 2016 around February. They've got Tuggeranong scouts doing scouting [in Auckland] so I actually came over to play for them," Tupou said.

"When I first arrived I was staying in the same house [in Calwell] and then I eventually moved out.

"My wife loves the place. If I had it my way I'd be back home, but my wife is really enjoying it here and she loves the lifestyle."