Ole Gunnar Solskjaer is trying to be brave in his bid to help get Manchester United back on top and answer the calls of supporters. Old Trafford wants silverware, but it also wants electrifying soccer, the sort of which Paris Saint-Germain produced on the way to schooling United in the Champions League on Wednesday [AEDT].

Yet if United are to win that twin battle, whether it is with Solskjaer or another manager with a sense of adventure, the club's power brokers will also have to be brave, and ruthless, not least over the futures of three forwards, Juan Mata, Alexis Sanchez and Romelu Lukaku, who look increasingly like square pegs in round holes. 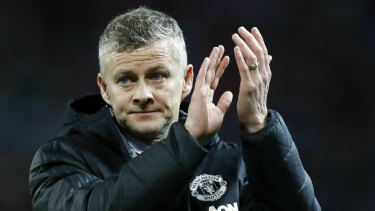 It stands to reason that a squad, assembled at eye-watering cost on the whims of three different managers with differing outlooks, none of which were a natural fit for United, will have shortcomings and drawbacks.

Solskjaer did not require a "reality check" against PSG to discover that. It just really hit home on a night that started brightly, but ended very badly, and United fans must hope executive vice-chairman Ed Woodward was taking careful note.

Whereas PSG could deploy Angel Di Maria and Julian Draxler in attack, with Kylian Mbappe for the injured pairing of Neymar and Edinson Cavani, United's ability to pin back the French champions, defend from the front, press and penetrate, evaporated the moment Jesse Lingard and Anthony Martial succumbed to injury.

Mata, Sanchez and Lukaku were ill-equipped to execute the game-plan originally conceived by Solskjaer and the consequences were calamitous in a one-sided second half when PSG scored twice, but could have had four or five. Sanchez plumbed new depths, with even Solskjaer admitting he was becoming powerless to help a player who "needs to find himself".

Mata had neither the legs nor the pace to attack with the vigour Solskjaer wants, or to track back in support of right-back Ashley Young, who was overwhelmed by Di Maria.

And what did it say for Lukaku that, with his team 2-0 down in the first leg of their round-of-16 tie and facing an early exit, a striker who cost the club up to £90 million was not summoned from the substitutes' bench until the final six minutes? From a fog of muddled thinking, Solskjaer has been able to pinpoint where United are strongest and, in less than two months, pull together the makings of an exciting first team, with Marcus Rashford, Paul Pogba, Lingard and Martial at their core.

Yet even this eternal optimist admitted post-PSG that, without the players in reserve with the qualities to play specifically the way he wants he could be forced "to find a different way to play" when those first-choice picks are missing. That is certainly the fear now. Lingard and Martial are both serious doubts for the FA Cup fifth-round tie at Chelsea with hamstring and groin injuries respectively.

In the same vein, how do United replace the suspended Pogba in the second leg against PSG following his red card on Tuesday? Fred, a £52 million summer signing, has played just 126 minutes under Solskjaer. United's squad limitations are not isolated to the attack but extend to the midfield and defence, too.

Whether he gets the job permanently or not, Solskjaer knows United must buy and recruit well and to very specific requirements after five-and-a-half years of incoherence in the transfer market – but it was also telling that he talked about a willingness to promote from within, which augurs well for the likes of academy graduates Tahith Chong, Angel Gomes and Mason Greenwood. Yet if such a two-fold approach is to carry weight, United's hierarchy must be brave, ruthless and shun sentimentality.

Sir Alex Ferguson once described United as "a bus that waits for no man" but, in recent years, it has become a bus that keeps acquiring passengers who never get off.

As fine a person and professional as Mata is, for example, the bold approach would be to let him leave this summer when his contract expires given that his attributes are at odds with an attack being built around speed and intensity.

Ruthless would be asking whether Sanchez and Lukaku fit into the bigger picture and taking decisive action, particularly if the departure of one, or both, could smooth the arrival financially of a player who does tick the right boxes. There will always be a limit to what a club can do in a single transfer window, but United cannot continue to fudge the issue.

They acted decisively in the sale of Marouane Fellaini only weeks after Solskjaer's appointment, but why hand Phil Jones a new four-and-a-half year contract given his dismal injury record when the sensible option would have been to invoke an option to extend his deal by 12 months and see where things lie this time next year? PSG just brought some pressing questions into sharper focus.