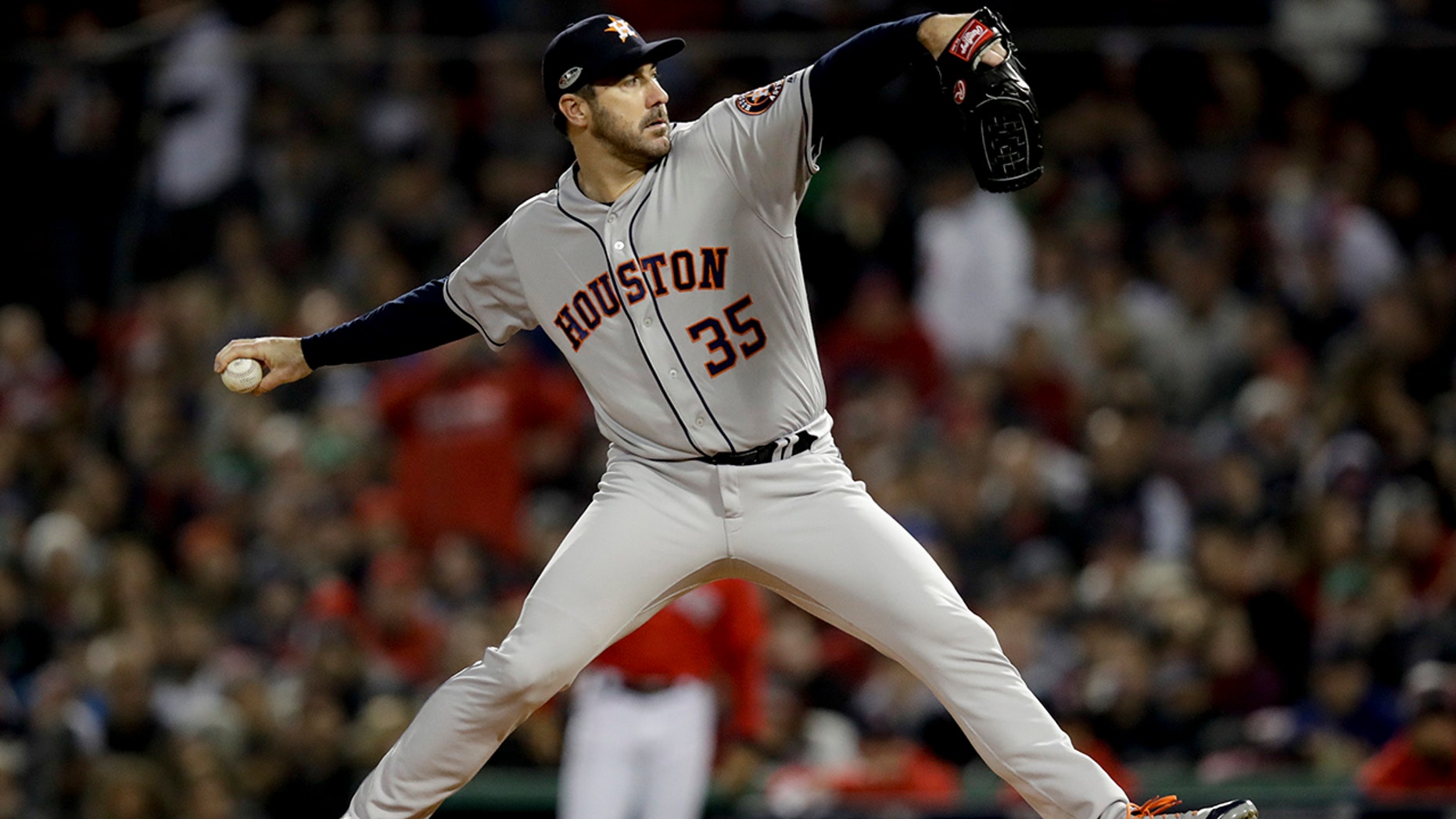 Houston Astros starting pitcher Justin Verlander throws against the Boston Red Sox during the first inning in Game 1 of a baseball American League Championship Series on Saturday, Oct. 13, 2018, in Boston.

BOSTON — Justin Verlander outlasted an uncharacteristically wild Chris Sale, overcoming control problems of his own to give Houston six innings of two-hit ball on Saturday night and lead the Astros over the Boston Red Sox 7-2 in the AL Championship Series opener.

On a 48-degree night that left both aces struggling to find the plate — and rookie Red Sox manager Alex Cora struggling to control his temper — Carlos Correa fisted a single into left field to break a sixth-inning tie and give the defending World Series champions their fifth straight postseason victory.

Josh Reddick hit a solo homer leading off the ninth, and Yuli Gurriel curled a three-run shot into the front row beyond the Pesky Pole to clinch it.

Game 2 of the best-of-seven series is Sunday night, with Boston left-hander David Price trying to end his postseason skid against Astros righty Gerrit Cole. Cora has expressed confidence in Price, a Cy Young Award winner who is 0-9 in 10 career postseason starts, and the 108-win Red Sox will need him to be better than Sale was in the opener.

In a rematch of last year's Division Series opener, when the Astros hit consecutive first-inning homers and pounded Sale for seven runs in all, Verlander improved to 13-2 in the AL playoffs. Houston only got one hit off of Sale, but he loaded the bases with two outs in the second on two walks and a hit batter before reigning World Series MVP George Springer singled in two runs past the glove of Eduardo Nunez, who slipped as he stretched for the ball. 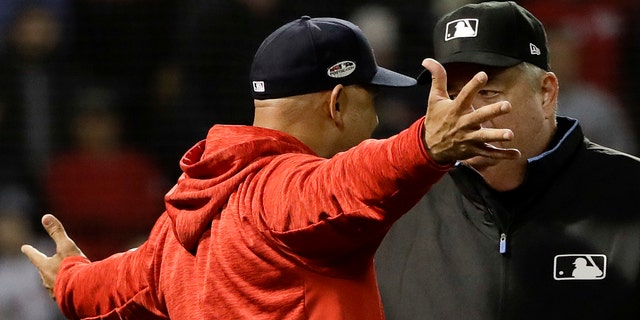 The Red Sox awakened the shivering, sold-out Fenway crowd in the fifth with Steve Pearce's single — just their second in the game — and two walks before Verlander walked a third batter in a row, forcing in a run.

Mookie Betts hit a hard grounder and third baseman Alex Bregman threw home for the force and the second out. With Jackie Bradley Jr. dancing on third base, Verlander put a 1-2 curveball in the dirt and past catcher Martin Maldonado, allowing the runners to advance and tying the game 2-2.

Andrew Benintendi worked the count full before looking at a 3-2 pitch that appeared to catch the edge of the zone for the third out. Benintendi slammed down his helmet and bat down and jawed with plate umpire James Hoye before Red Sox coaches ran in to get between them.

Cora continued the argument and was ejected; he handed over his lineup card to bench coach Ron Roenicke and headed down the tunnel.

Houston took advantage of another hit batter in the sixth — this one by reliever Joe Kelly — and Nunez dropping the ball for an error as he started to throw after fielding Gurriel's grounder. Correa's RBI single on a 100 mph from Kelly, who took the loss, put the Astros ahead 3-2.

Verlander was charged with two runs on two hits and four walks, striking out six. He matched Don Larsen from 1955-57 as the only pitchers to allow nine hits over a span of four-postseason starts, according to STATS.