Canberra Vikings coach Nick Scrivener hopes Joe Powell will flourish during a three-week stint in the National Rugby Championship after he was left out of the Wallabies squad for the next two Tests.

Powell has been injected straight into the Vikings starting side for their clash against the NSW Country Eagles and will fly to Armidale instead of joining the Wallabies on a flight to South Africa. 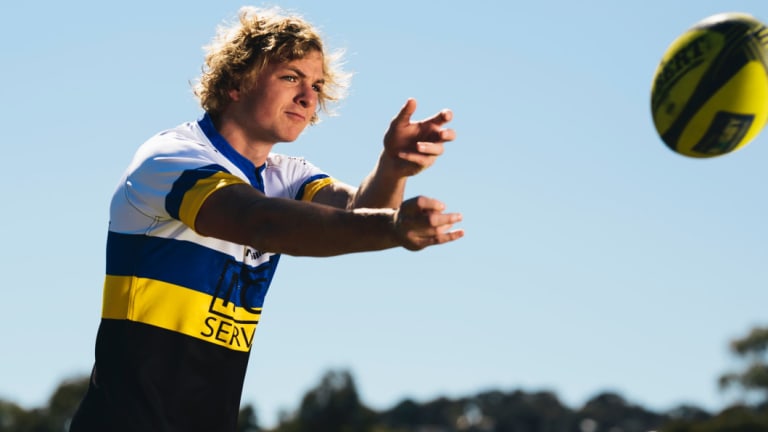 Joe Powell is in the Canberra Vikings’ starting team this week.

Jake Gordon will take Powell's place as the Wallabies' third-string scrumhalf after Australian coach Michael Cheika decided Powell needed game time more than he needed to be in the Test training environment.

The challenge for Powell now is to show the Wallabies what they're missing and send a message that he deserves more game time after playing just four of the past 20 Tests.

"[Powell] sort of gets thrown around here and there. Sometimes it's really difficult for a player when he's got a couple of masters and he's going from here to there," Scrivener said.

"The type of guy he is … he just gets on with it. He's got a point to prove to the national selectors as well and he's going to do that by playing footy.

"I just want him to contribute to our team, and if our team plays well it's going to help him.

Powell has played just four and a half games in the past three months. Cheika picked him on the bench three weeks ago, but opted not to put him on the field against the Springboks.

Powell's impact in the international arena has been limited by a lack of game time. He made his Test debut in June last year, but has played just 46 minutes for the Wallabies in the past 15 months.

Staying with the Test squad to tour South Africa and Argentina would have likely meant he was travelling as a training specialist, but he will now instead get three NRC games to prove his worth.

Powell is one of several changes to the Vikings squad, which has won the past two games in a row in a hit and run seven-week season.

Irae Simone gets his first chance to start at outside centre after leaving the NSW Waratahs to sign a deal with the ACT Brumbies for the 2019 Super Rugby season.

Australian under-20s prop Tom Ross will get his first starting chance, his junior Wallabies teammate Mack Hansen will start at fullback and Rob Valetini will move to the No. 6 jersey in his second game back from injury.

Ross is replacing Les Leuluaialii-Makin at tighthead prop and has a chance to step up after signing a wider-squad contract with the Brumbies.

The Brumbies still have two front-row spots to fill on their roster for next season and Ross could emerge as a Super Rugby candidate if he impresses after Leuluaialii-Makin tore his calf.

Former Queensland Reds prop James Slipper is still on the Brumbies' radar as a recruitment option to bolster prop depth, and it's understood the 86-Test veteran is close to making a decision on his future.

The Rebels have also shown interest in Slipper, who has been exiled by the Reds after twice tested positive to cocaine earlier this year. But the Wallabies are keen to find him a new home and the Brumbies could help him relaunch his career.