Change has been forced on Melbourne Vixens entering Super Netball’s final round, and if history is any guide, change is when the Victorian side thrives.

All season the Vixens have, psychologically, blocked out the notion of chasing bonus points for winning each quarter as they opted to focus on winning games.

The Vixens have rarely tinkered unless forced to do so, such as for Chloe Watson’s pregnancy or Emily Mannix’s recent finger injury. 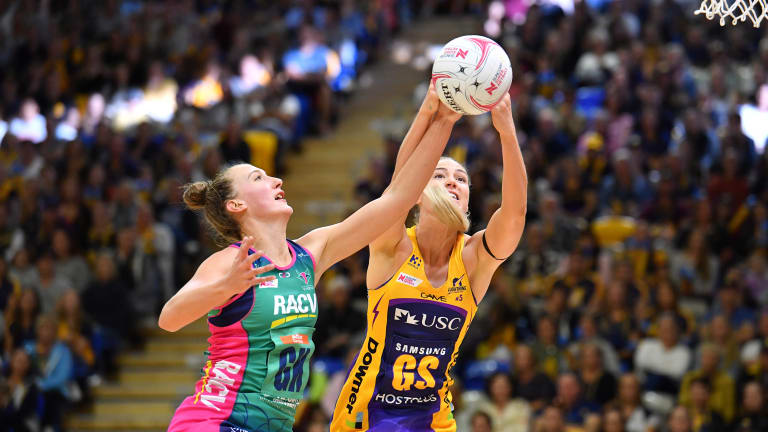 But when the Vixens run out against Sunshine Coast Lightning at Hisense Arena today, they will be forced to do things differently. This game is an elimination final with the Vixens and Lightning fighting for the last places in the finals.

The Queensland Firebirds claimed seven of the eight possible points in their 76-44 win over Collingwood yesterday so they are into the finals along with West Coast Fever and GWS Giants.

The reigning champion Lightning looked gone five weeks ago after early season losses pushed them down the table but they have kept collecting bonus points – a league-best 33 – and now a win and two bonus points will see them into the finals.

The Vixens will have to be mindful of a poor start because the Lightning could end the home side’s finals hopes if they win the first and second quarters as two bonus points will push them beyond the Vixens’ reach.

“I feel like those bonus points will need to be on your mind a little bit,” Vixens defender Mannix said.

“Something we have talked about is that we need to not worry about it and focus on playing, but potentially we could need some bonus points so it’s a tricky situation.”

The Vixens may also need to surpass the Lightning on percentage depending on how many bonus points they have. A five-goal Vixens win will give them a superior percentage.

Former Vixens premiership defender and now Lightning captain Geva Mentor said her side had focused on their bonus points after their early losses.

“Our bonus points show we have been right in it, just had a few games that we have lost by one or two goals,” Mentor said.

“It means we have been rewarded by scraping some wins in quarters – you are grinding out each quarter and we know they will be wanting as many bonus points as possible but it won’t change anything for us.”

The Vixens have also been trying to replace their most unique player after star shooter Mwai “MJ” Kumwenda ruptured her anterior cruciate ligament in last week’s loss to West Coast Fever.

There are few more popular players around the league than Kumwenda and certainly no one with her agility around the goal circle. Both Mannix (“my heart broke for her”) and Mentor (“absolutely gutted”) expressed how disappointed they were for Kumwenda.

Rookie shooter Sam Gooden was named in the goal shooter role but the Vixens also have shooters Rahni Samason, the Australian Netball League most valuable player, and Kim Commane, who has previously filled in at shooter, on the bench.

The Vixens have confidence in their reserve players as current starters Liz Watson, Kate Moloney, Jo Weston and Mannix are among those who have come through the development ranks. Last season they had to replace Mentor and this is where Mannix made her name.

Vixens reserve defender Kadie-Ann Dehany also stood tall as a replacement for Mannix when she missed four weeks recently with a fractured finger which she has just returned from.

“We saw Kadie-Ann make the position her own and it shows anyone here can step out on court,” Mannix said. “The first couple of years I probably played in about six games over two seasons, so it’s the work that you do at training that counts for a lot. You have to be ready to step out on court whenever you are required. I was lucky enough to get my first start in round one last year and you have to grab it with two hands and go with it.”

Mentor knows to beware of whoever runs out in the goal-shooter bib today.

“Victorian netball has such a strong base and skill level that it doesn’t matter who they bring in, they do a good job and slot in nicely,” Mentor said.

“I know they will miss MJ but if anything it will give them a bit more fire in the belly to attack this game.”