Chris Waller felt like he left the Shannon Stakes with two winners after Noire broke through for a group 2 victory at Rosehill on Saturday.

Noire ($3.40  fav) swooped down the centre to beat Kingsguard ($13) by a neck but stablemate Youngstar ($3.60), which never got a clear crack at them as she came through the field rather around them,  was   an unlucky third just over a half-length from the winner. 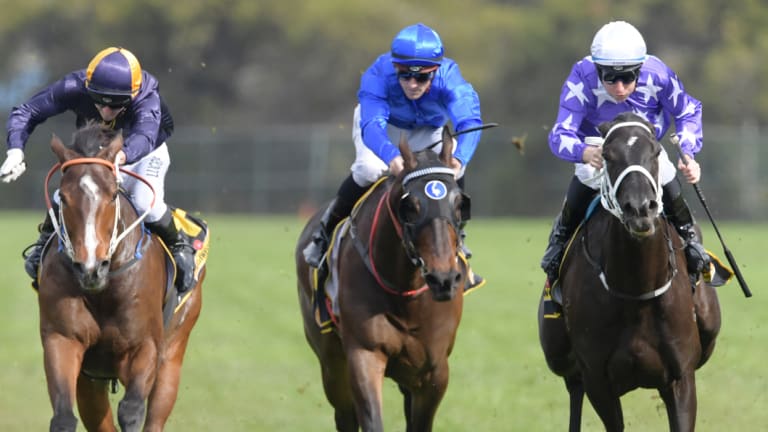 Late bloomer: Tommy Berry brings Noire down the outside to win the Shannon Stakes.

“It was a good, tough win. She’s come from last, she came around the outside and finished off as you like to see,” Waller said.

“She is a five-year-old, so she is certainly a latecomer. She has always showed us enough ability and hasn’t been overraced. She is thriving.

“But I thought  Youngstar  was brilliant. I thought it was the run of a winner. She is obviously looking for further.

“Down the inside, I think it is hard to get mobile. With clear running, I think she goes close to winning the race.

“She’ll have one more run, probably in the Turnbull against Winx, and then to the Caulfield Cup.”

Jay Ford, who remains an underrated jockey in Sydney, produced another brilliant  staying ride to deliver Miss Admiration into The Metropolitan contention in the JRA Trophy at Rosehill on Saturday. 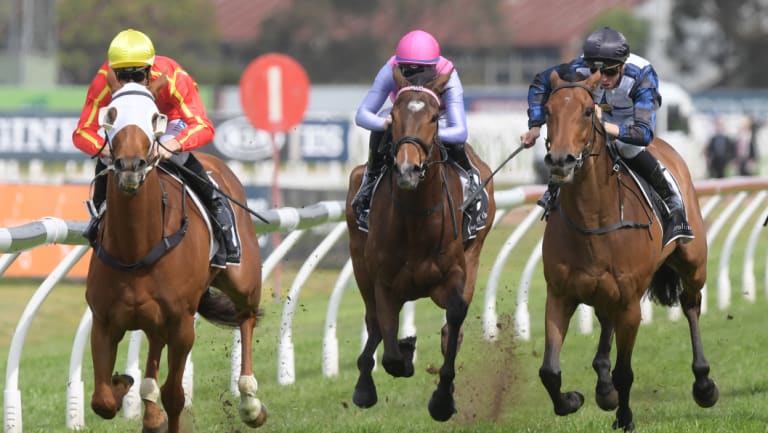 Off and gone: Miss Admiration shows a clean pair of heels in the JRA trophy.

The mare was travelling strongly to the turn and it was up to Ford to find an inside run, which led to the victory.

“She was very genuine throughout. She put herself to sleep on the fence. Her quality shone through at the back end,’' Ford said. "She was nice and strong through the line.

“The way the race was run, I knew they would stop and tire. I just had to wait for an opening somewhere. I worked my way back to the inside when they came off the fence. I had a lapful of horse. I just had to put her through a hole and she was strong through the line.”

Miss Admiration had a good turn of foot when the run appeared and put 1-/3 4 lengths into Shalmaneser with Sin To Win a short neck away third.

Another gem for Lees

Kris Lees might not have got the three-year-old group 1 in the Golden Rose but his golden run with the age group continued as Gem Song took the opener at Rosehill on Saturday. 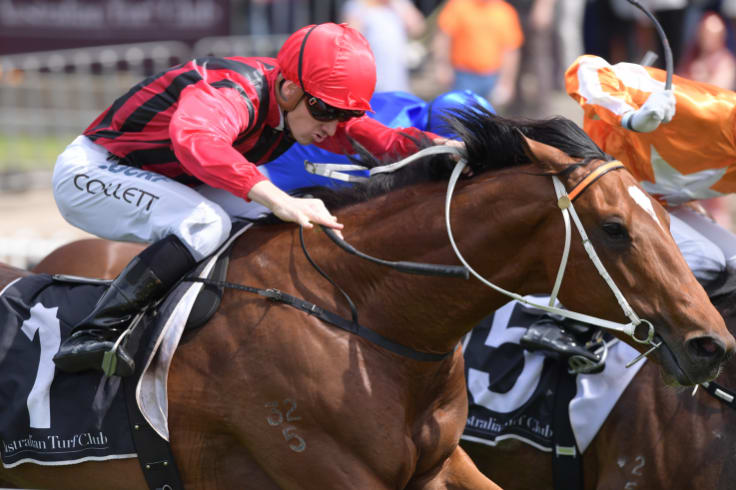 Jason Collett found a run at the right time with the second generation Gooree colt to take his record to three wins from four starts.

“We are very proud of our family and this is by Your Song, a colt we race, out of very good mare in Beautiful Gem,” Gooree business manager Janette Tioseco said. “It is exciting for us to have him and Smart Melody continuing family traditions for Gooree.”

Lees is looking at a Victoria Derby pereparation via the Caulfield Guineas for Gem Song.

“He is a progressive type and we might come back for the Dulcify next week and then the Guineas,” Lees said. “We have a quite good crop of three-year-olds at the moment.”

Lees will have Miss Fabulass, a daughter of Frankel out of Samantha Miss, start favourite in next week’s Flight Stakes and is considering starting another unbeaten Frankel, Frankely Awesome, in the Spring Champion Stakes the following week after she made it two from two at Scone on Friday.

“It is a group 1 and if she could run a place it would do a lot for her value,” Lees said.

Joseph Ible had a plan with Seeblume a month ago and it  had the perfect ending as she won the Highway Handicap at Rosehill on Saturday.

Hugh Bowman drove the five-year-old mare away from her rivals after a perfect ride, which was one he had chased. 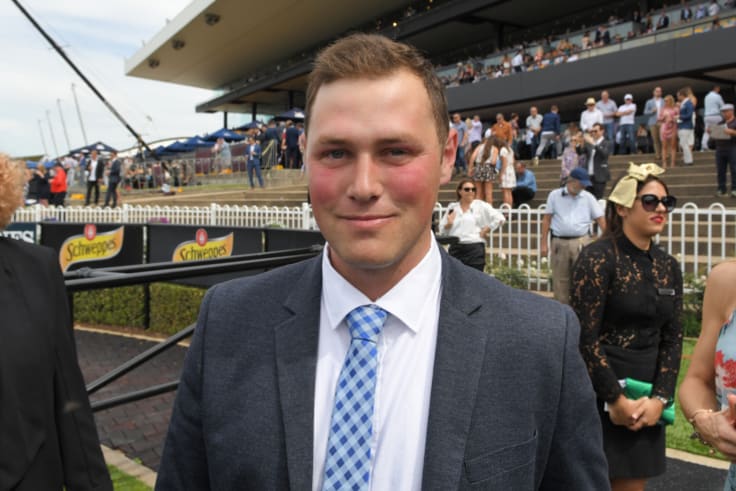 “I actually rang Hugh’s manager before her run at the beginning of the month and told him about this race and to watch her,” Ible admitted. She ran a solid fifth there and it was enough to get a return call.

“They rang back and said they would take the ride in this race, which gave me a lot of confidence.

“It is my first winner in Sydney and she is pretty good mare. She takes a while to get over her runs but I think she could be up to a black type race and there are a couple in [Melbourne] Cup week that suit.”