Comparisons with Boban might be unfair on the up and coming Paret but the four-year-old continues to rise through the grades and premier trainer Chris Waller considers him as another Epsom winner. 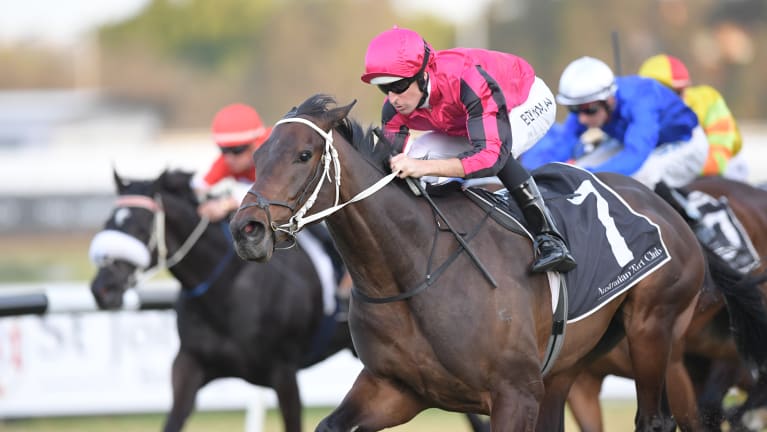 Epsom prospect: Paret has been compared to five-timegroup 1 winner Boban.

Paret stormed down the outside to take final event at Saturday’s Rosehill meeting and will head to the Tramway Stakes or Bill Ritchie Handicap, which carry an exemption from ballot to the big spring mile. Waller admitted there was a bit of Boban, which won the Bill Ritchie, Epsom and what is now know as the Kennedy Mile at Flemington, about Paret.

“There is, especially the way he races,” he said. Boban won five-time group 1s, including an unbeaten spring as a four-year-old.

Gerald Ryan has had Australian Derby placegetter Harper’s Choice up all winter but is looking towards the Metropolitan now he has struck wining form.

Harper’s Choice has had a six-week break between runs after winning the Winter Cup but outstayed Emperor’s Way to win the Premier’s Cup Prelude.

“He is finally winning and there are a nice bunch of races for him in the Wyong Cup and Newcastle Cup and who knows, he might get to the Metrop,” Ryan said.

Godolphin trainer James Cummings learned under his legendary grandfather Bart and might have used one of his truisms with Trekking. ‘‘Patience is the cheapest thing in racing, but most people don’t use it,” the Cups King would say.
Trekking has always promised to be a group performer but, after failing in the autumn, Cummings put him away. Trekking ($2.30 fav) returned by defying a wide passage to come home over the top of Tactical Advantage ($3.40).

“We have the ability to wait for these horses and, in this case, it has worked,” Cummings said.

Arrowfield Stud principal John Messara led the tributes for Nick Columb, who died after having a stroke in Spain on Friday.
Columb was a long-time chairman of Australia’s Thoroughbred Racehorse Owners Association and owned many great horses including Courtza, which won the Blue Diamond-Golden Slipper double, and Caulfield Cup winners Imposera and Tristarc.
‘‘Nick Columb was the staunchest friend, always fearless, constantly innovative and deeply passionate about horse racing and so much else,’’ Messara said. ‘‘He leaves an unfillable gap in Arrowfield’s world and so many good memories.’’

Champion jockey Damien Oliver got it right in his first ride on the Darren Weir sprinter Voodoo Lad, who powered home to win the group3 Aurie’s Star Handicap at Flemington on Saturday. Voodoo Lad ($4.60) settled at the back of the field in the 1200m straight sprint before letting down strongly to edge clear of Godolphin import Home Of The Brave ($3.90 fav).
‘‘Darren’s main focus with me was to just switch him off early and get him relaxed,’’ Oliver said. ‘‘He said if you get him relaxed in the first 400 metres you know you’re going to be in the race.’’
with AAP