Two first-half goals were enough to give Western Sydney Wanderers the bulwark they needed to see off a Melbourne City second-half fightback and secure a 2-1 win at AAMI Park to put them into the FFA Cup semi-final.

City could only blame themselves for their exit at the quarter-final stage, however. 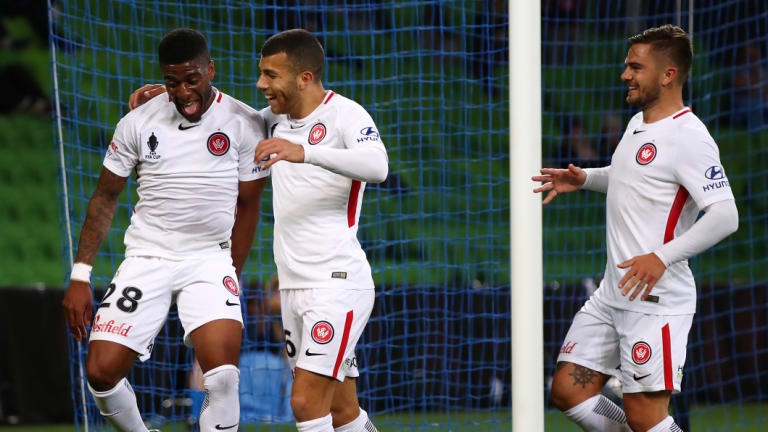 Rolieny Bonevacia of the Wanderers celebrates his goal with Marcelo Carrusca and Josh Risdon at AAMI Park.

Star striker Bruno Fornaroli missed an early penalty and then spurned other first-half chances as the hosts had their chances to put themselves in the driving seat.

Wanderers had to ride their luck through the opening period.

The visitors survived a penalty shout inside the first 10 minutes when Rostyn Griffiths' effort was deflected for a corner but they did concede a spot kick four minutes later.

Riley McGree's shot was well blocked by Wanderers goalkeeper Danijel Nizic only for Wanderers fullback Josh Risdon to handle as the ball came back towards goal.

Fornaroli strolled forward but his approach was far too casual and although he sent Nizic the wrong way his softly struck penalty went wide of the post. 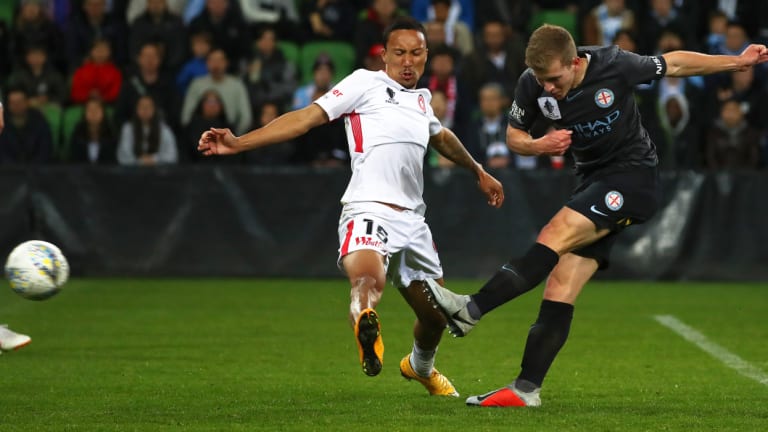 When spot kicks like that come off, the taker gets the plaudits for the coolness of his nerve.

When they don't, he gets pilloried for being too cocky – even if, in Fornaroli's case, confidence and a measure of arrogance is part of the makeup which usually makes him such a good striker in the A-League.

The Uruguayan had the chance to atone four minutes later when set up by Lachlan Wales, but he side-footed wide from close range.

The Wanderers, having survived that scare, pushed forward. Jaushua Sotirio found space on the left and sent through an inviting cross but none of his teammates could make contact. Fornaroli then had another good chance – once more from a Wales cross – to make good for his error, but this time the South American headed over.

The feeling grew that City might be made to pay for their profligacy, and that is exactly what happened just after the half-hour mark when they were punished by an excellent Oriel Riera header, the Spaniard's glancing flick from an Alexander Baumjohann corner giving Eugene Galekovic in the City goal no chance.

That goal came in the 32nd minute. Nine minutes later, the Wanderers put their stamp even more firmly on the game when they scored a second.

It's a goal that Luke Brattan, the City midfielder, won't want to see too often in any video review of the game. As he looked to carry the ball towards the halfway line, he hesitated and was caught in possession by Baumjohann, who chased back to excellent effect. 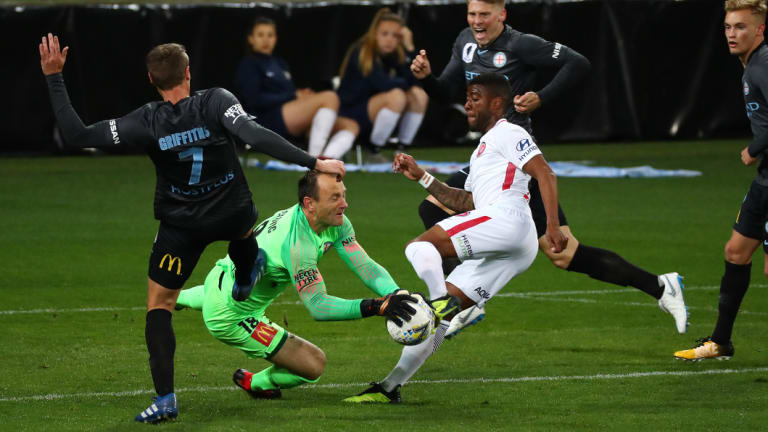 The German drove towards the City goal and although his pass forward was intercepted by the hosts' captain Scott Jamieson, the ball broke free to Roly Bonevacia, the Dutchman quickly lashing the ball past Galekovic.

City went to the interval aggrieved to find themselves two down having missed one penalty and had a couple of shouts for others rejected, but the reality is that they only had themselves to blame.

Their finishing was sloppy and lacked intensity while Wanderers defended well, kept their shape and were combative and sharp enough to take their opportunities when they came.

However, City got themselves back into the contest with a tremendous goal from midfielder Riley McGree seven minutes after the restart to give the home fans hope that a second-half comeback might ensue.

Brattan's corner was only partially cleared and the ball broke free to McGree on the edge of the penalty area. The Olyroo did well to control the ball, juggle it in one move and then lash home with a fierce left-foot drive.

Kearnyn Baccus was less than pleased when Wanderers coach Markus Babbel withdrew him with Marc Tokich early in the second half.

Minutes later Wanderers had an excellent chance to restore their two-goal break when Riera had a free header only to direct the ball straight at Galekovic.

The hosts went close to getting back on level terms with 17 minutes remaining when Griffiths' effort from a free kick after Nathaniel Atkinson had been fouled was deflected for a corner.

Nizic was down well at his near post to save a late City attempt, but the Wanderers failed to take a chance to seal the victory in stoppage time when substitute Nick Fitzgerald, an ex-City player, shot wide when clean through.

In the end it didn't matter, and Babbel's side are now just one game away from a major final. City must regroup and prepare for their opening A-league match, the derby against Melbourne Victory.