Home » Sport » 'When the game is on the line, that’s when Cronk earns his money'

Back in early May, when the Roosters were four-and-four, many of us wondered if the great Cooper Cronk experiment was worth the pain.

It was early doors but the halfback’s stat line after eight rounds was concerning: three try assists, two line breaks. 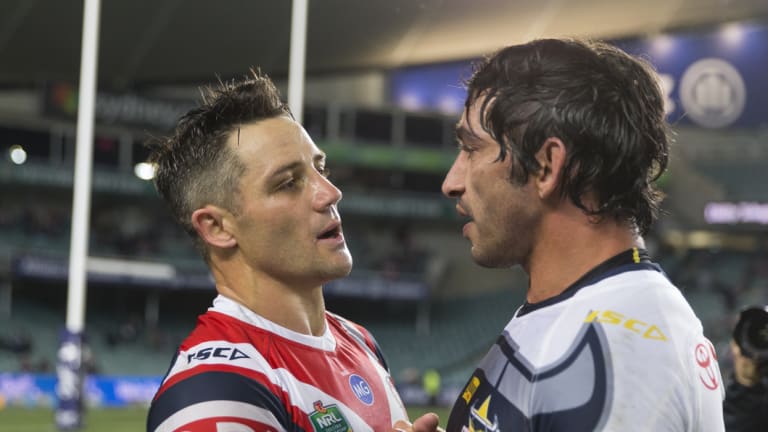 Now, with a minor premiership in the bag, with one hand on the premiership trophy, with Cronk guiding his side like he’s playing Xbox, and all of this without the Roosters really playing their best footy, it’s fair to say Cronk 2.0 has been a success.

His former Australian and Queensland teammate, Johnathan Thurston, knew the decision to sign Cronk and squeeze out Mitchell Pearce was the right one.

“When the game is on the line, that’s when he earns his money,” Thurston said of Cronk, who is reportedly on $1 million a season. “That’s where the Roosters are getting their value. They’re at the pointy end of the season and he’s getting them around, closing out the game.

“There’s been so much pressure on him. This would’ve been his most challenging year; learning the systems, earning the respect of the coaching staff and players. He’s been brought here to do a job and that’s to win a comp. There’s a lot of pressure externally but if there’s anyone who can handle it, it’s him.

“Cooper has this shield on him. This round shield and pressure just rebounds off him. Nothing penetrates it. Nothing rattles him.”

Thurston, who retired this season, takes further steps into his life beyond footy when he fronts Channel Nine’s coverage of the Storm-Sharks preliminary final at AAMI Park on Friday night.

He’s already joking about being one of those former players who bags everyone.

“Michael Morgan, what are you thinking there?!” he said jokingly to his former Cowboys halves partner.

“Oh, you’re going to be one of those commentators?” Morgan grumbled back.

Thurston will next month start his “Evening with JT” tour of Australia and New Zealand in which he candidly talks about his career and life, and then signs autographs and memorabilia.

It will coincide with the launch of his much-anticipated autobiography.

“Like the book, there’s been some highlights and almost some of the lowest of lows,” Thurston said. “You can’t brush over the top of that.”

Thurston will be live on stage at venues across Australia and New Zealand. The Sydney show will be held at The Star on November 4. Tickets starting at $50 are available through Ticketek.

While Souths captain Sam Burgess denied allegations of an explicit FaceTime chat with a 23-year-old Maroubra woman, the subtext it provides for Saturday night’s preliminary final against the Roosters is fascinating.

The Roosters stood accused during the week of leaking the story to the media, right in the middle of the finals. The NRL integrity unit has run a line through that claim.

The scuttlebutt also enraged chairman Nick Politis, who has a close relationship with Rabbitohs counterpart Nick Pappas and was worried the finger was being pointed by Souths.

The investigation into Souths is ongoing, although it’s hit a brickwall because the woman involved has refused to be interviewed.

The integrity unit’s chief investigator, Karyn Murphy, is still exhausting every possible avenue to speak to her.

In other rugby league hate news, it will be pass-the-popcorn stuff if Souths meet the Storm in the decider.

There’s been some recent sniping between the clubs over wrestling techniques.

Burgess complained about it to the referees when the sides met in August. Storm captain Cameron Smith, on the eve of the finals, took a swipe at Souths coach Anthony Seibold, who was once an assistant to Craig Bellamy in Melbourne.

“Knowing 'Seibs', he would have taken a few defensive programs and strategies up to the Rabbits," Smith said at the time.

Souths were bemused when the Herald reported earlier this week they were unfairly getting quick play-the-balls for lightning fast dummy-half Damien Cook because ball-carriers were diving at the feet of defenders in surrender tackles.

Castle caught out of her depth again

Rugby Australia boss Raelene Castle showed weak leadership during the Israel Folau “all you gays are going to hell” episode.

She’s been similarly feeble with the so-called Wallabies fans who went after backrower Lukhan Tui following the loss to Argentina on the Gold Coast.

"Two fans came into the area where players families were gathered and were arguing and using offensive language in criticising the players over their performance,” Castle said. “One of Lukhan’s young family members was physically caught up in this exchange and this prompted the reaction from Lukhan.” 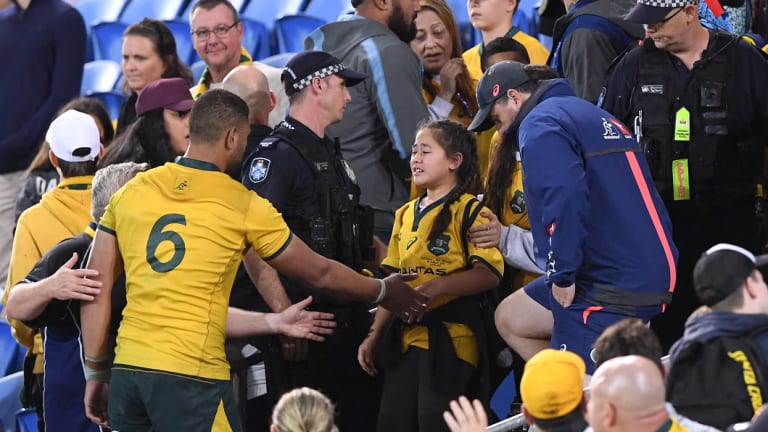 Unsavoury: Lukhan Tui consoles his sister after the incident.

Um, if that doesn’t warrant banning a spectator then what does? RA dropped the matter because Lukhan didn't want action taken.

No player would. In these instances, they usually want to be the bigger man.

Castle allowed the Folau situation to fester for weeks when it should have been dealt with within a day. In the end, RA didn’t want to take him on because it feared criticism from the likes of radio shock jock Alan Jones over “freedom of speech”. He's also off contract.

As it stands, the incident last weekend has prompted Lukhan to stand down indefinitely while the bloke who attacked him is free to do the same thing the next time the Wallabies play.

All is not lost, Duges

Hadfield called with some positive news.

For the past five years, he has organised the Special Olympics Splash, a corporate swimming event where company teams compete in freestyle relays.

Gofers and Baxter competed, having flown back from Russia on the same day after winning bronze with the Australian Stingers at the FINA World Cup.

“The event raised over $60,000,” Hadfield said. “The Splash has raised just under $400,000 to support the programs of Special Olympics Australia. There are definitely some good-news stories around Australian sporting representatives.”

End of an arena

Allianz Stadium will host its final sporting event when the Roosters play Souths on Saturday night before it’s torn down to make way for a brand new one worth $729 million. Grab a plastic cup of warm beer and join me as we remember the top 10 moments at this iconic ground.

It’s been called the greatest grand final in rugby league history and Canberra fans who watched their side win 19-14 in extra-time would agree. Tigers fans who saw Mick Neil ankle-tapped close to the line, then Wayne Pearce knock on, then Benny Elias’ field goal attempt hit the cross bar, will think differently.

The NSW firebrand and the Queensland icon went toe-to-toe when Geyer sparked an all-in brawl with a stray elbow to Steve Walters’ head. If not for referee David “Charlie” Manson getting between the pair as they left field at halftime, it could’ve exploded again. “I was 22 and he was 32 so I think I would have had him,” Geyer said years later.

1993: MARADONA, UM, LINES UP AGAINST SOCCEROOS

More than 43,000 packed into the SFS to get a glimpse of the greatest player in history in Argentina’s World Cup qualifier against the Socceroos. The match ended in a 1-1 draw. Years later, Maradona confessed he and his teammates took “speedy coffee” before the match so they could run faster.

1993: SFS SQUEEZES IN HUGE CROWD AND BONO’S EGO FOR U2 CONCERT

We love a stadium concert and the SFS has had some rippers: John Denver, Joe Cocker, Coldplay, Foo Fighters … But the best this column has seen was the epic Zoo TV concert from Irish rock band U2. What’s not to love about a stage that has a massive lemon next to it?

It seems like yesterday. With Australia clinging to the lead with minutes to go, All Blacks star Jeff Wilson broke free, raced 40 metres, was about to score in the corner when … What? Who’s this? A pint-sized Wallabies scrum-half called George Gregan came across in cover and jolted the ball free. 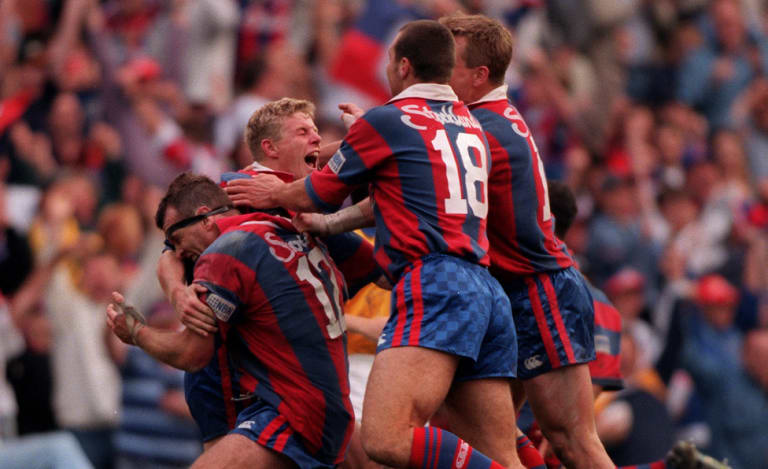 With the code split in half because of the Super League War, rugby league needed a fairytale. It came in the final minutes of Newcastle’s grand final against Manly. Andrew Johns threw a dummy, went down the blind side and sent winger Darren Albert over for the try, prompting Channel Nine caller Ray Warren’s famous call.

It’s the bell that was used to ring the start and finish of the Rabbitohs' first match in 1908 against Norths at Birchgrove Oval. It’s also the bell Russell Crowe paid $42,000 for at a function to raise funds for Souths' court case against News Ltd for excluding them from the comp and it's bell Crowe and former player Albert Clift rung for their return match … against Roosters.

Anzac Day matches between the Roosters and Dragons have become a special fixture on the sporting calendar since the first was played in 2002. It’s a day of remembrance, respect, emotion, perspective. It’s also the day, in 2005, when Dragons halfback Mat Head set up a try for Matt Cooper with a chip and chase and then threaded a sideline conversion in the rain for a 26-24 win.

The Sydney Derby is the greatest thing to happen to Australian football in years and it came of age when Sydney FC and the Western Sydney Wanderers met during the 2013-14 A-League season. Sky Blues fans filled one end of Allianz. The red and black of the Wanderers filled the other and they went into collective orgasm when Shinji Ono flicked the ball over one defender, nodded it on and then fired past the keeper to nail a 2-0 win.

“For three to four minutes, though, the man described by someone nearby as ‘a complete knob’, kept going.” — Outstanding reporting from Herald colleague Tom Decent on the fan who abused Wallabies star Lukhan Tui. A complete knob indeed.

Gun back-rower Tyson Frizell has had a ripper of a season for the Dragons and NSW. But he saved his best play for last with his uncanny resemblance to Colombian drug lord Pablo Escobar during Mad Monday celebrations. Matt Dufty as Duff Man wins second prize.

Buffalo Bills cornerback Vontae Davis retired from the NFL at half-time in his side’s 31-20 loss to the Chargers. He changed into street clothes and left the stadium. Not since Kanye West have we seen someone “drop mic, walks off stage” with such aplomb.

It’s a big weekend for …

Dave Warner and Steve Smith, who take the first tentative steps on the long road to redemption when they take the field for Randwick-Petersham and Sutherland respectively in Sydney grade cricket.

It’s an even bigger weekend for …

The Melbourne Cricket Ground when it hosts the mother of all preliminary finals when Richmond and Collingwood meet on Friday night. Some fans camped outside Ticketek for two days to get tickets.